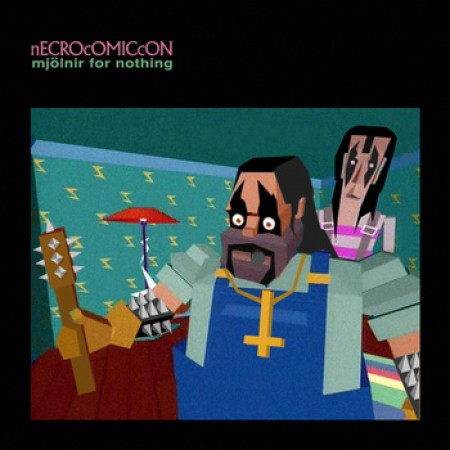 (The psychic damage caused by working in retail, the pain of 80’s music, the guilty pleasure of listening to a black metal band play that 80’s music . . . DemiGodRaven gets it all off his chest.)

Earlier this January, MetalSucks.net put up a quick little post about a group called Necrocomiccon, a joking sort of internet project that ‘fused’ black metal with 80’s music. Basically, it breaks down to a bunch of goofballs who sat around and covered 80’s music with some black metal vocals. While the joke didn’t quite ring true with the editors over there (some get it, some don’t), I found myself chuckling at the idea and giving the music a download. It’s free over on the Necrocomiccon Facebook page, so if you want, you can hit them up there or on their bandcamp, where the guys have been kind enough to link everything in case the free bandcamp downloads run out.

The post itself was interesting because I think it actually reflected a little microcosm of metal music these days and how the internet has had an effect on it. The internet and its vast reaches have basically given rise to the art of gimmickry as an art form, and if a band has a decent gimmick, it is highly likely you’ll see it taken up by the louder voices on the web and spread like wildfire.

This phenomenon can have huge, lasting implications — it popularized the crabcore movement as a whole, for example, taking what was a bunch of assholes on the internet enjoying stuff ‘ironically’ and transforming it into a whole style that has jumped past the point of being mildly self-aware to a full blown ‘serious’ style, at least to the people who listen to it.

While none of this has had a direct effect on Necrocommicon, I think it helps explain how something like this could have been birthed. I find this whole idea fucking hilarious, and the music actually interesting from the standpoint of it being a novelty. You also do have to appreciate the fact, though, that something like this really shouldn’t work because it only appeals to to two types of people with one unifying factor. They either have to love 80’s music or, like me, be trapped in retail where you’ve heard every single one of these songs to the point where emptying out your skull with some well-placed buckshot seems better than hearing Phil Collins ever again.

That unifying factor, however, is the whole gist of the joke: You have to find that adding black metal to anything is fucking hilarious (which, to be very clear, I do).

It is such a self-serious style that adding it to something as cheesy as 80’s music makes the whole thing funny. This is painting in VERY broad strokes, mind you, but it is basically the comedy of opposites. Giant + Midget working together as a cop duo, Uptight stuck-up woman + Hippy woman as roommates, Black Metal + 80’s Music Cheeseball Garbage, and so on and so forth. Surprisingly enough, this does work to a degree, and if you’re in one of the above two categories, the Necrocomiccon material may become something of a guilty pleasure.

The novelty of the music present in the vast swath of stuff here is about as meaningful as Children Of Bodom’s cover songs, which were essentially bonus tracks that had to be searched out. You could actually view most of the Necronomiccon material as having about as much appeal, the only difference being that these songs really haven’t been morphed to fit the genre. Instead of morphing 80’s music into black metal songs, most of what Necrocommicon have put out so far has been a black metal band performing 80’s songs.

While the former would’ve been a brilliant turn of events (especially after stuff like Wolves In The Throne Room, Agalloch, and Abigail Williams have begun to spin heavily in my rotation), the latter is pretty good in its own right. You just have to have an appreciation for the stupid and the absurd, and believe me, since my time at TNOTB, I have that.

Surprisingly enough, the earlier material from Hot Dog Cart Hunger (so, early, as in . . . 2010) is more black metal than the music on the latest release, Mjolnir For Nothing. It seems that the music has shifted somewhat into something resembling pagan melodeath more than black metal. This is largely the effect of the cheeseball level of the 80’s music and its synths elevating the music past the darkened, empty, and miserable deaths of black metal and into the more melodic and godless realm of pagan melo-death.

The humor found on each release is also different: Whereas Hot Dog Cart Hunger feels almost like a proof of concept in album form, Mjolnir For Nothing is taking the baton and running with it. It also features my favorite joke so far in the form of an excellent mash-up of Amon Amarth and Huey Lewis into ‘The Pursuit Of A New Drug’, which, now that I’ve heard it, has become completely resistant to any ability I might have to separate them from each other again.

Much has been made of the fact that a former Thursday axeman is present in the band (you’ll note that every link to the band’s material comes from BillHenderson.org), but to be honest with you, that doesn’t mean much to me. The whole post-hardcore/emo wave that Thursday are often written into blew by me so fast — I was more concerned with stuff like SYL.

Henderson has been in about a half dozen different bands of various levels of heavy since then, too, and will likely join a bunch more. If we’re really going to lynch people for their presence in bands we don’t enjoy, we honestly should have crucified both Skrillex (Sonny Moore) and former The Human Abstract frontman Travis Richter for their sins committed in From First To Last, a band that I personally think people should be lit on fire for listening to. By the same token, look at the reverence with which we hold material by Machine Head these days. Have we really forgiven them for stuff like The Burning Red and Supercharger?

So, a guy from a crap band (in our eyes) goes on to make a joke band. The presence of the name Rick Ghastly should have tipped some people off that maybe we should cool our jets a little bit.

One of the things that has surprised me about this stuff is the staying power that it has had with me. Maybe it’s because I’m the perfect audience for this stupidly niche project, but I’ll still put this on from time to time. I’ll probably have to be psychoanalyzed for the amount of damage done by the shit I’ve listened to during my time in retail, because I now willingly listen to 80’s music under the guise of black metal.

Case in point: Right now I’ve got Necrocomiccon’s cover of Lionel Richie’s “Hello” blaring — but you’re also reading something written by a guy who has had a long running joke of answering the phone for one friend with, “Hello? Is it me you’re looking for?”. Hell, we even slipped one or two jokes based on that song into the old TNOTB-cast.

Metal Blogging, to me is a very private corner of the internet. I think that by having the passion to write and comment on metal, even on smaller sites such as this one [Editor’s intrusion: who da fuck you callin’ small, bro?], exposes quite a few of us for being complete and total geeks. Naturally, I think that lends itself quite well to our enjoyment of stupid shit like this, which helps explain the complete savaging the MetalSucks guys received for calling this out as a dumbass gimmick.

Make no mistake: It is very much a dumbass gimmick, but I also enjoy it a shit ton. The fact that Necrocomiccon share two covers (“In The Air Tonight” and “Billie Jean”) with Nonpoint (a strawman argument in the MetalSucks article) is hilarious to me in its own right. I don’t think trying to change the guise away from “Black Metal doing 80’s” (which, genre-wise, it really isn’t) is going to fix much. I think you just have to embrace the fact that this is very, very stupid shit and run from there. You have to have a sense of humor about your music sometime.

Man, I really overthought this crap. I can’t even remember where I started this article.