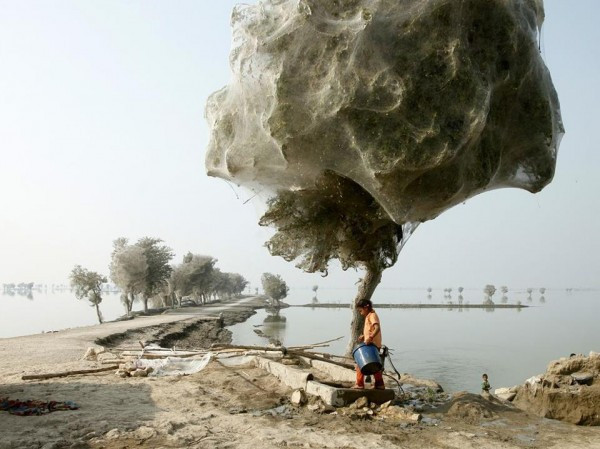 “An unexpected side effect of the 2010 flooding in parts of Sindh, Pakistan, was that millions of spiders climbed up into the trees to escape the rising flood waters; because of the scale of the flooding and the fact that the water took so long to recede, many trees became cocooned in spiderwebs. People in the area had never seen this phenomenon before.”

That’s the caption for this photo I found someplace. It originally appeared at National Geographic. It’s metal, because it’s creepy as shit. Also, I would not stand under one of those trees, because fuck spiders. I hate ’em.

And that’s how we begin this milestone 50th installment of THAT’S METAL!, a series in which we collect images, videos, and news items that we think are metal, even though they’re not music. I have five more items in this installment, many of which were suggested by NCS readers.

This is funnier than a speech by Rick Santorum, which is saying something, but it seems that not everyone at this press conference was amused. Wait ’til you see the really intemperate response of the dude who swats the flying penis machine from the sky. Party-pooper!

Ben C. sent us this next item, too. The following photo is of Maria Jose Cristerna, better known as “La Mujer Vampiro” (Female Vampire), posing during the Venezuela Tattoo Expo in Caracas on January 27, 2012. She has prosthetic fangs and platinum implants in her forehead, and 98 percent of her body is covered in tattoos. Sexy. 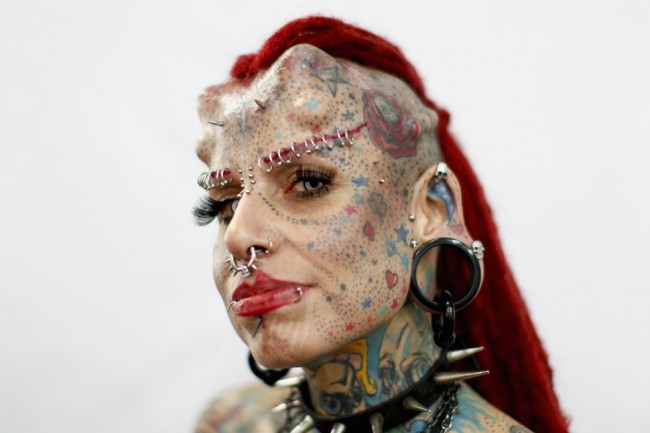 Of course, Ms. Cristerna’s day job is practicing law. That’s right, she’s an attorney. I bet it’s an office practice of some kind, like writing wills, because I can’t see her getting many clients if she depends on court appearances. I’d still listen to her (at least when not doubled over in sympathetic pain), but most judges and juries might not. That’s just a wild guess, of course.

Here’s a brief video interview she did at the the Caracas tattoo expo, because you can’t see the teeth in that photo, and the teeth really complete the whole package:

I found this video via TYWKIWDBI under the headline “Your Tax Money At Work”. It was filmed on January 20, 2012, south of Santa Cruz, California. As you will see, it’s metal — literally. I had several thoughts as I watched this.

First, I decided to poke around and find out what a tank costs. I don’t know for sure what kind of tanks were on this train, but the main U.S. battle tank is called the M-1, and according to The Font of All Human Knowledge, it costs $5 million per copy. And there were A LOT OF COPIES on this train. I didn’t make an actual count, because, y’know, I’m  a busy man. So I just made a rough mental estimate, and the total I came up with is a FUCKLOAD of money (that’s the standard fuckload, not the metric fuckload).

Second, seems like you might never have to use these things in actual combat, at least with enemies whose countries are mostly flat and not covered in sand that could gum up the gears. People who live in non-mountainous and non-sandy countries who try to fuck with the good ol’ U.S. of A., we just send them this video and ask them to rethink things.

Third, these babies aren’t painted in desert camouflage colors. Last I checked, we weren’t currently at war in any green places. So why do we have these, where were they going, and just generally, what the fuck?  Also, best YouTube comment: “I liked the part where a tank passed by.”

Black Shuck sent me a link for this next video. It shows a modified record player that plays cross-sections of wood from a tree using an optical camera instead of a record needle. It reads the growth rings in the wood and, with help from a computer, translates them into a kind of music. The project is called Years and was developed by a German named Bartholomäus Traubeck.

So, yes, this is a bit of a cheat on the theme of this series, since it’s music. But I had to use this, because playing wood is definitely metal. Part of this actually sorta sounds metal, too.

YEARS from Bartholomäus Traubeck on Vimeo.

Our final item is delivered in remembrance of Super Bowl Sunday, which is today of course. I’m not a fan of either the Giants or the Patriots. If there were some way they could both lose, I’d be happier. But I’ll be watching the game anyway, at least for as long as it’s a good contest, mainly so I can see the commercials. And since the commercials will probably be the best thing about the game from my perspective, I’m closing out this post not with football but with . . . a commercial!

I don’t watch much TV, but somehow I’ve seen this commercial for DirectTV three or four times over the last couple of weeks, and it cracks me up each time. Maybe I shouldn’t, since it’s kind of making punks and metalheads out to be losers and undesirables, but on the other hand it’s obviously not serious. And I do think it’s metal.

And that’s it for this edition of THAT’S METAL!