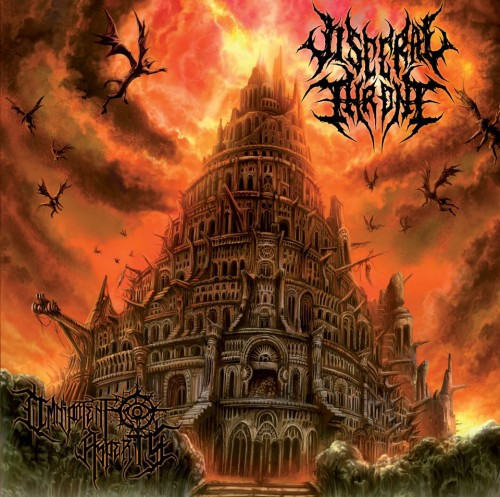 This is the second EYE-CATCHERS feature in as many days. In yesterday’s installment, we reported on new cover art for a forthcoming album from a band whose music we know — 16. In this post, we’re returning to the original intent of the EYE-CATCHERS series: using cool album art as a guide to finding music from bands we don’t know.

In this case, the album art was created by the talented Italian artist Marco Hasman. We’ve featured his artwork before at NCS, in posts about albums from Fleshgod Apocalypse, Beyond Creation, and Blasphemer. This time, his work will grace the cover of a debut record by a band from Evansville, Indiana, named Visceral Throne. The album is called Omnipotent Asperity and it will be released by Brutal Bands at some point later this year.

What Visceral Throne produced before that album was a two-song, 2010 demo. Both of those songs appear on the track list for the album; don’t know if they’ve been re-recorded for the album. The demo versions are still available for free download via Bandcamp (HERE), though that option will close once the album is released.

Highly accelerated drums, slamming de-tuned chords, production values that emphasize the keen slicing edge of the sonic spectrum, grotesque gutturals, and one timely injection of shred — those are your basic ingredients. Spin them in a centrifuge while setting them on fire, and you get a delectable serving of slam metal. Reminds me a lot of Visceral Disgorge, and not just because they’re both Visceral.