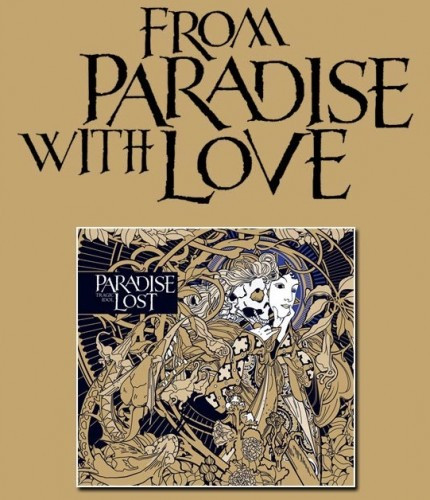 Huh, it still seems to be Valentine’s Day. And I found someone else who loves you, even if no one else does (besides your friends at NCS, of course, because we love all of you). The someone else is Paradise Lost. I discovered that they love you last night (thank you DemiGodRaven), and meant to tell you about it earlier today, and . . . just fucked up.  What a shock.

Here’s how much they love you: They and their label (Century Media) are giving away a song from their next release (their 13th studio album), Tragic Idol. The song is called “Crucify”, and you can listen to it after the jump and get the download link if you like it — but the free download is only for today.

I may have listened to Paradise Lost once long ago, but if I did, I’ve forgotten. I became interested more recently because of all the coverage we gave the UK death-doom band Vallenfyre last year. Vallenfyre was started by Greg Mackintosh, who is a key member of Paradise Lost. I liked the Vallenfyre album so much that I decided to give Paradise Lost a chance, even though I knew their music wouldn’t be my standard fare.

If you’re unfamiliar with the band, their music is melodic doom, with mainly clean singing. Much of it is slow. Of course, much of it is atmospherically bleak. But much of it is also beautiful, and it achieves that without sacrificing heaviness.

So, while not a complete convert (yet), I appreciate what I’ve heard, enough to do this: First, I’ll stream that free new song, “Crucify”, and then after that I’ve got an official video for a song called “Forever Failure” from the 1995 album Draconian Times. The song and the video have captivated me, though I sure can’t say any of this will appeal to those of you who (like me most of the time) like a steady diet of turbo-driven, head-cleaving, flesh-ripping metal.

Here’s a link to the page where you can get the download link for that song in exchange for your e-mail address.

And now here’s that video:

6 Responses to “PARADISE LOST, NOW AND THEN”