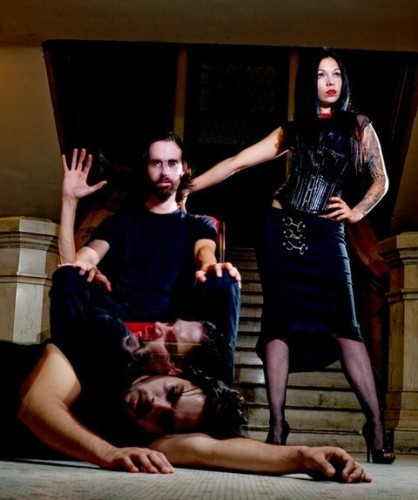 What a coincidence: Three days ago I decided to catch up with LA’s Dreaming Dead in a post called “Lapse”, mildly whining about the loooong wait for their Midnightmares album, which the band have been keeping to themselves for almost a year and a half while searching for a label. Really, my whining wasn’t intended as criticism of the band, but instead as a reflection of my own greediness/neediness, because the songs from the album that have surfaced over time have been so impressive.

Well, guess what? Today the NCS carrier pigeon squadron delivered a press release with this announcement:

“Los Angeles-based progressive/melodic death metal act DREAMING DEAD has set April 20th as the release date for their highly anticipated sophomore effort, Midnightmares. The follow up to 2009’s Within One, Midnightmares showcases DREAMING DEAD’s ability to meld elements of black, death, thrash and Schuldiner-inspired progressive metal into one thought-provoking and intense sonic assault. . . DREAMING DEAD are working with director Thomas Mignone and Peter Leininger (known for their work with Morbid Angel, Sepultura, Megadeth and many more) on a video for the track “Corpse Mtn.” Details on the video shoot are forthcoming.”

Given the absence of a label mention, I assume this will be a self-release. I’m bamboozled over the fact that no label has pounced on this band like lions on lambs, but I’m also happy that the wait is nearly over. Nice to see that a new vid is on the way, too.  Stay tuned . . .

UPDATE: For more insight into the Midnightmare release delays and other interesting DD tidbits, check out the Jason Roche interview of Liz Schall published today (Mar. 2) at LA Weekly.

5 Responses to “ANOTHER DREAMING DEAD UPDATE”