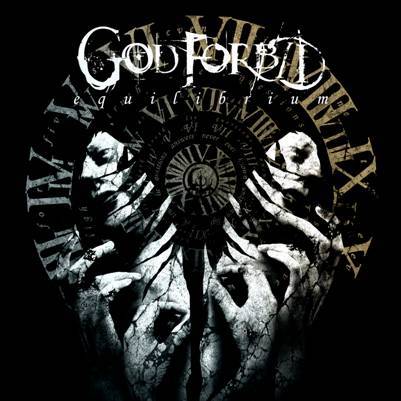 Once upon a time, when metalcore was a new thing, I ate it up, all I could get and as much as I could hold. And one of my favorite bands was God Forbid. My listening tastes have moved off in different directions, but I’ve still got a soft spot for this band, and I’m getting curious about what’s happened to their music. We’re all about to find out, because their sixth album, Equilibrium, is going to drop on March 26 via Victory Records.

The line-up hasn’t changed much since the early days — Dallas Coyle is gone and Matt Wicklund is in — but the world of music has changed a lot since the days of Determination, and God Forbid have done their share of changing along the way, too, with a more dominant thrash attack, jacked up by the head-spinning guitar solo’s of Doc Coyle and even the incorporation of progressive influences. But three years have passed since Earthblood, and I’m wondering where we’ll find God Forbid now.

Well, so far we’ve got two pieces of evidence — a portion of one song called “Cornered” and as of yesterday a full song called “Don’t Tell Me What To Dream”. And I’d certainly say, based on yesterday’s release, that God Forbid have . . . “modernized.”

More thoughts about that, plus the new song, after the jump. Also after the jump is a new song from another Victory band, North Carolina’s Wretched, whose 2010 album Beyond the Gate I praised in this NCS review. They also have a new album due for release — Son of Perdition. 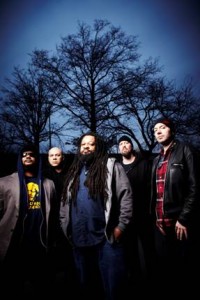 When I said the new song has a “modernized” sound what I really meant was that it has incorporated djent tones and rhythms. At least that’s what I’m hearing. Or perhaps I should say, in this dawning age of Koloss, that God Forbid have injected their rapid-fire blasting with a dose of Meshuggah-style pneumatics on “Don’t Tell Me What To Dream”. Yes, the band have always had a pulverizing groove, but this still sounds like a new accent to me.

I’m not complaining, mind you, because the song is damned good. Byron Davis’s vocals are raw, high-octane, larynx-shredding blasts of fury (no clean singing on this song); the punchy, physical rhythms are guaranteed to stir up the pit; and the production quality is great — as it should be, given that it was produced by Mark Lewis (The Black Dahlia Murder, Whitechapel) and Jason Suecof (Bury Your Dead, Chimaira) and was mixed and mastered by Jens Bogren (Opeth, Amon Amarth). I’m just saying I’m a bit surprised.

But don’t expect the whole album to sound like “Don’t Tell Me What To Dream”, because none of the band’s more recent albums have been homogenous affairs. Moreover, the excerpt of “Cornered” sounds like it would be quite at home on Earthsblood. Here are both of the releases to date:

Now let’s move on to the next band. You get one guess, and one guess only, about who created the album art: 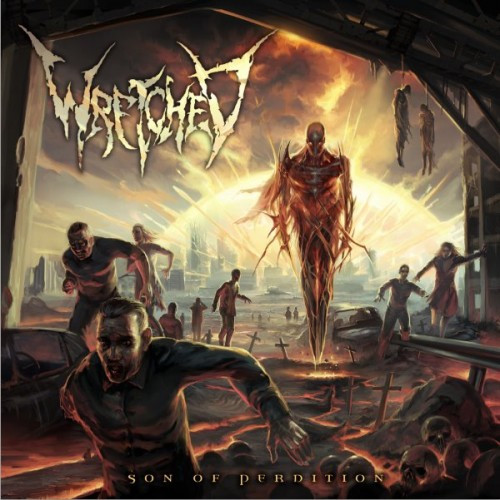 If you guessed Par Olofsson, congratulations. Wretched’s on an artwork roll — Dan Seagrave did their last album cover, and now Olofsson. Not too shabby. 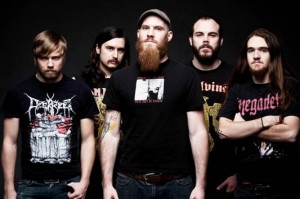 Wretched’s new album is due for release on March 27. Since Beyond the Gate, they’ve had a line-up change, with Adam Cody (Glass Casket) coming in as the new vocalist and Andrew Grevey (Loculus) taking over on bass, but the band still includes guitarists Steven Funderburk and John Vail, and they’re the real creative backbone of this musically unpredictable band.

Yesterday, the band released a new music video for a song called “Repeat . . . The End Is Near”. It features inset frames of both guitarists doing their thing in what appears to be a playthrough, with guitar tabs scrolling to the right. The song is a hell-ripper of technical, melodic death metal, and it’s fun to watch these two guys bring it in tandem.

It’s a good teaser for Son of Perdition, but if the album is anything like the last one, it will be full of surprises. Have a listen and let us know what you think. (Also, don’t be bashful if you think I’m exaggerating the change I hear in that God Forbid tune.)