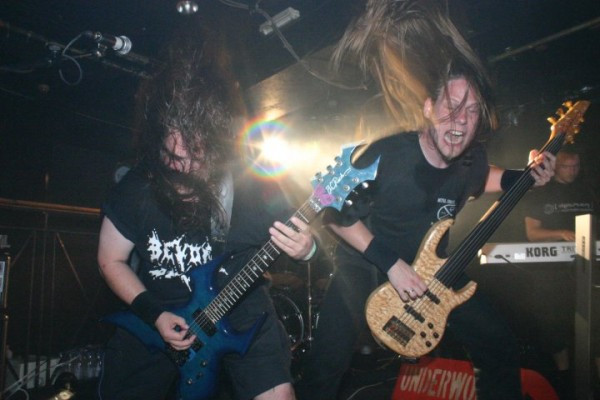 A blast from the past.

Pardon my harsh language, but if you don’t like The Monolith Deathcult, you’re a ninny and a poop-head.  You’re a nincompoop, even. Sorry, but that’s just the way it is.

The band have been working on a new album, Tetragrammaton — excuse me, TETRAGRAMMATON. Advance pieces of music, which may or may not appear on the album (and likely will sound quite different if they do appear) have surfaced over the last year, and they sound just fucking fine. Some of what we’ve heard has disappeared from public view, but some pieces remain — the evidence of works in progress. We’ll get to that in a moment.

But in addition to dribbling out songs in various stages of completion, TMDC are starting to give us up-close-and-personal insights into the recording process, fleeting glimpses of genius at work. Yes, we will now have a series of all-important video studio reports from TMDC as TETRAGRAMMATON continues to take shape.

Yesterday, we got Part 1 of a planned 342.4 video reports on the recording of the album. In Part 1, we see “offline” member of TMDC, Carsten Altena, laying down a keyboard track with the kind of verve and virtuosity that shames the classical masters. People who like a bit of orchestral grandeur in their blast-furnace death metal are going to eat this up like a plate of fresh road kill.

As for other evidence of the band’s creative progress, we have four clips of music retrieved from the TMDC SoundCloud page (some quite recent). The first one is “Aslimu!!! — All Slain Those Who Brought Down Our Highly Respected Symbols To The Lower Status Of The Barren Earth”, which the band released about a year ago, as kind of a gap-filler between albums. It’s still available for free download via the SoundCloud player.

After that is a clip called “Drugs, Thugs & Machetes”, one called “Gods Amongst Insects”, and a third called “H.W.A. (Ho’s With Attitude)”, which appeared briefly back in May 2011, then disappeared, and has now reappeared in revised form. Again, I’m making no claim that any of these songs will appear on the album, either “as is” or in revised form, because I don’t fucking know! I’m just snooping around.

And by the way, these TMDC SoundCloud tracks have a way of disappearing without warning, so get your own snooping done quickly. The songs reveal considerable diversity, which won’t surprise anyone familiar with Trivmvirate. Despite the variation in the music, however, I predict you will have a multitude of those “can’t . . . not . . . headbang!” moments. Why should I be the only one to get my mind satisfyingly blown by this music?

But first, that all-important inaugural studio report — go HERE to watch and listen, because I don’t know how to embed the clip in our page and I haven’t found it on YouTube. Possibly, we will have upcoming posts for each of the remaining 341.4 video reports. Or possibly not.

12 Responses to “THE MONOLITH DEATHCULT CHECKS IN FROM THE STUDIO”