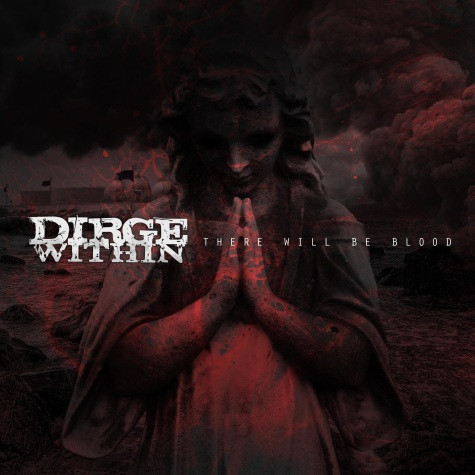 (DemiGodRaven has turned into a reviewing machine. I want whatever he’s on. Here’s his third review in as many days — and the subject is the forthcoming release from Dirge Within.)

Dirge Within are one of those bands whose rise is seemingly unexplainable. Any question of where these Chicago-based metalcore warriors came from is met entirely with a response of, “Uh…well…uhm”, and then nothing. They just seemed to appear one day and had an AWESOME VIDEO FILLED WITH SAWDUST, SAND, AND EXPLOSIONS, and then there was silence. The group’s previous release, Force Fed Lies, did them well enough to justify a second disc, but the main thing that’s difficult to understand is the overarching question of…why?

Since I have buried myself in all things -core lately, I figured I’d give these guys another shot, and boy, let me tell you. If you thought Silent Civilian’s second album Ghost Stories was a disappointment, then what you need to do is take this disc and pretend that it’s the followup to Silent Civilian’s first release. For those not in the know, Silent Civilian was a metalcore offshoot of Spineshank, with the lead singer on guitar and vocals, and I came to find out that their debut was actually pretty goddamn solid. The only problem was that their followup was like their debut again, and they quickly fell to the wayside in favor of a reunited Spineshank.

I know this sounds like one hell of a wild-ass tangent, but just bear with me here, because I will be goddamned if Dirge Within’s There Will Be Blood doesn’t sound like, and is on par with, Silent Civilian’s debut release — a solid if not guilty-pleasure piece of metalcore.

I feel like I’ve fallen into crazy world drawing such a strange-as-hell comparison, but I have no better idea where in the world to start, or how in the world to begin explaining why I enjoy this album more than I do Demon Hunter’s or Impending Doom’s . . .  the two other discs that I reviewed just prior to this, both of which I also said were solid. 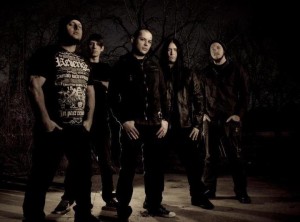 Dirge Within do have a very good ear for melody and guitar leads. The guitar lead, for instance, converts “For My Enemies” (probably song #459 with the same title) from a relatively dumb-ass song into something quite listenable. Lyrically, it is still a really dumb track, but man, is that guitar part that kicks in during the chorus catchier than hell.

Dirge Within also tend to stick pretty closely to the good cop/bad cop singing style that was popularized in the early part of the metalcore rise. That means you’ll spend a lot of songs listening to a growled chorus and then a clean-sung section. Some of them go over okay, and I’m not going to deny that they have a good singer, but this is a very familiar formula.

One song in particular, called “Memories”, drifts really hard into Five Finger Death Punch buttrock territory. Of course, it sounds like something written post-breakup, so it may be a very thinly veiled attempt at getting some sort of radio play. But this is also about as close as the band gets to that territory, because the rest of the songs are heavier. One song in which the aforementioned formula does work pretty well  is “Without You”, which is, yes, another vague, somewhat post-breakup sounding song. Maybe I just got out of a relationship I didn’t know about and that is why I’m okay with these songs? Someone should look into that.

Another oddball thing worth noting is that the chorus and general message of the song “Absolution” are strikingly close to the song “Indictment” by All That Remains. Like, down to the phrasing of the chorus — instead of “THIS IS…MY INDICTMENT…OF YOUR BELIEFS”, it becomes “THIS IS…ABSOLUTION…”, and so on. It’s probably a bad sign that I listened to this song and immediately thought of another. 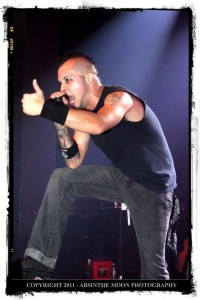 There Will Be Blood is actually a pretty dense album, with the production giving some of the songs a thick sound. And even though the musicianship is pretty straightforward apart from some excellent guitar playing, the music is mixed well. The bit that I had heard of Force Fed Lies was of the same quality, so the guys plainly have access to some pretty solid production mechanisms. You can detect the bass clearly, and the one song in which it shows up the most, I kid you not, is the group’s cover of “Wolverine Blues”, which has been included as a bonus. Now, some people may turn up their noses at the idea of a group like Dirge Within taking on Entombed, but it actually turns out alright. Dirge Within is no match for Entombed in any sense, but they do manage to take “Wolverine Blues” and make it their own.

That cover is also probably the slowest song on There Will Be Blood. While other bands in their genre try their hands at ballads, Dirge Within tend to keep the pacing relatively quick, which I think has helped make There Will Be Blood more enjoyable. It should probably just be stated as a general rule of thumb that fast metalcore to DGR = perfectly okay, and slow metalcore = dull. As an addendum, Himsa did pull off a couple of slow doomy parts in their songs before they called it quits.

To return to the vocals, things are about as solid as you can get. Lead vocalist Jerms Genske (urgh) carries his weight well and can hold a note instead of coming off like some scene kid who sounds like he choked down a can of helium before hitting the stage. He has an effective (if at times somewhat flat) scream, and his singing voice has some range to it. He’s part of what makes this disc so approachable; if you had to deal with someone struggling to sing throughout an entire CD,  things would be much, much worse. 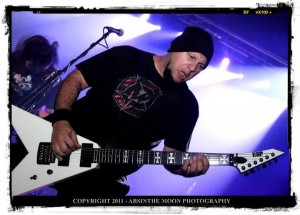 The contributions of guitarists Matt and Shaun are probably the highlights of this album. Even though the music is relatively solid metalcore, I want to mention again that they know how to write very good melodies and even pull off some cheesy as hell, 80’s-style guitar parts. I would guess they knew that when they wrote the music and just played it tongue-in-cheek the whole way through. The drumming is also well thought out, too, with a double-bass part when needed and kicking into the occasional blast as well, though without flourishes worth mentioning.

Of the three core releases I’ve hit up recently, There Will Be Blood is probably the one that will be getting more spins. The songs aren’t all zingers, but the band’s thrashier tendencies lend themselves well to the style of music they are making. This may be more easily digestible music than those of you looking for a challenge are after, but if you want a solid bit of metal, Dirge Within’s latest offering should fit that bill alright. Like a lot of other albums that fit into the ‘solid’ category, this one may fall by the wayside in time. We’ll see if this stuff remains memorable beyond a month or two past its release.

EDITOR’S NOTE: There Will Be Blood is scheduled for release by on April 10. It can be pre-ordered here. You can find the band on Facebook here. As for the music, the band are offering a free download of the song “For My Enemies” in exchange for a tweet (details at this location). Below is the lyric video for that track, plus another new song called “Without You”:

2 Responses to “DIRGE WITHIN: “THERE WILL BE BLOOD””