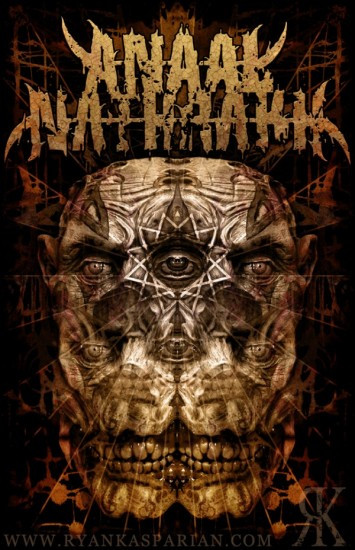 I apologize to the people of England. Your country is not the darkest pit of hell. It just seems that way sometimes. After all, it is home to Anaal Nathrakh and Dragged Into Sunlight.

These bands are not for the weak of spirit, nor do they appeal to people with mushy-brained, whitebread, mainstream-metal tastes. Instead, they appeal to people like me who enjoy metal that makes them feel as if they’ve been gutted with icepicks, sucked dry by leeches, and infested with burrowing maggots. Anaal Nathrakh give you a nightmarish rocket-ride into the abyss, and Dragged Into Sunlight trap you there in a vat of acid sludge that slowly liquifies your flesh.

AN were putting the finishing touches on their new album in January, and not long ago they added a note on their FB page promising an album teaser in the near future. Today, they unveiled a new shirt design created by Ryan Kasparian (whose web site is here). You can see it up top. It is so fucking cool that I had to post about it. I also had to pre-order it. You can pre-order it, too, via this link. I would like to make a polite suggestion to AN: GET RYAN FUCKING KASPARIAN TO DESIGN THE NEW ALBUM COVER!

You can be sure that we will post the album teaser as soon as it’s ready. And now, on to DIS . . . 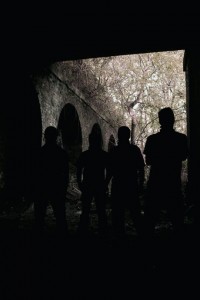 This morning I received a press release about the doings of DIS. I think I already knew most of what it contained, but it did include something that was new to me.

What I already knew: DIS is at work on a new concept album that will be titled Widowmaker. According to the release, it will be “a sound that leaves you feeling as though you’ve been struck with a bag full of bricks; heavier, louder and soaked to the bones with crippling misery.” I would expect nothing less.

Also, the release advised that Dragged Into Sunlight will be appearing along with Coroner, Bongripper, and Fleshpress on Sunday, April 15, at the 013 venue in Tilburg, Holland as part of the Roadburn Festival. They’re also scheduled to perform on April 28 at the SWR Festival in Portugal.

Despite the fact that I feel somewhat bitter at my inability to attend these shows myself, I wish them much success on these appearances, with success being measured by how many audience members are left emotionally traumatized and unable to think straight (with bonus points for how many shit themselves in fear).

Here’s the new thing I discovered from the press release: previously unreleased footage of Dragged Into Sunlight’s drummer laying down the drum track for “Buried With Leeches”, which appeared on the band’s last album, Hatred For Mankind (2009). Watching it makes me feel kinda claustrophobic, but it also leaves me agape with wonder.

9 Responses to “NEWS FROM THE DARKEST PITS OF HELL: ANAAL NATHRAKH AND DRAGGED INTO SUNLIGHT”