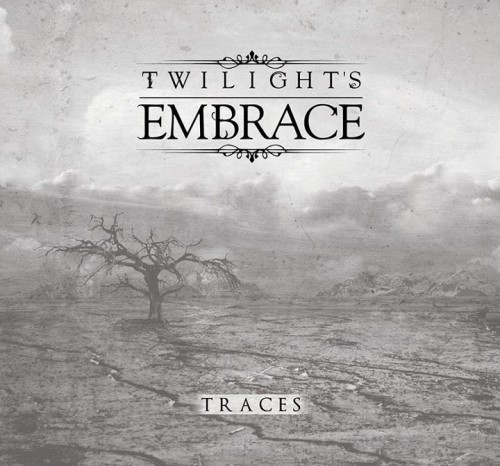 Twilight’s Embrace are based in Nottingham, England, and on April 6 they released their second EP, titled Traces. Although the EP only includes three songs, the total run-time is more than 20 minutes, and as the band themselves correctly state, it covers a lot of ground.

In its style, the music reminds me of Finland’s Before the Dawn. I get a little shame-faced when I compare one band to another, like I’m undermining the first band’s individuality or implying that the music doesn’t have the spark of something original. But that’s not my intention. I just know you’re asking yourselves right now, should I bother finishing this review or let my itchy fingers fly across the keys and take me someplace else? So, I’m giving you a shorthand idea about what the music is like, so you can hang in, or twitch yourselves away.

Traces had an impact on me. Last week, I was feeling pretty low, so low that I didn’t even want to listen to music, which tells you how low I felt. This EP was recommended to me, and I thought I’d listen to just one song out of curiosity, before returning to the dark place in my head where I was wallowing. The one song led to the next one, and the next, and over two days this EP was all I listened to, off and on. It both suited my dark mood and also made me feel better.

The music is dramatic, heavy, haunting. The band know how to pull together driving riffs with pulsing bass-lines and well-placed double-bass kicks, the kind of rhythms that make you start moving involuntarily. They also know how to create a contrast, with clean guitar leads and flaring solo’s that lift your spirits and moments of relative quiet filled with solitary guitar arpeggios.

“The Path” leads a galloping charge — the one that hooked me — and then the beginning of the second song, “The Final Night” takes you down, with a slowing beat and plaintive clean vocals. The aura of Gothic/doom-metal never completely leaves that song, but as melancholy as it is, it also includes a flying guitar solo that made me thing of birds soaring over a sunlit sea.

For a song called “Demon”, the third track begins with a surprising sense of peace, but man, the hammer comes down quickly. Heavy chugs and beastly vocals grab hold and compel attention. This long song includes other brief interludes of relative calm, with spoken-word vocals and introspective dual acoustic guitar melodies. But “Demon” also packs a heavy punch and takes flight again with beautiful guitar leads and solo’s.

The contrasting vocals, along with the doom-laden air, are part of what made me think of Before the Dawn (that is, the band as it was before Lars Eikind hit the road). The harsh vocals are cavern-deep and massive. The clean vocals don’t have Eikind’s pitch-perfect clarity, but they grew on me as I listened. Still, that’s one area where the band could grow stronger, if they plan to preserve the vocal dichotomy.

Twilight’s Embrace is a talented band, and Traces is a solid offering of dark melodic death metal with strong melodies and heavy-hitter rhythms. Worth checking out — which you can do right here:

Traces can be acquired either as a “name your price” download or as a limited edition digipak via the Twilight’s Embrace Bandcamp page (here). For more info about the band, this link will take you to their Facebook page.