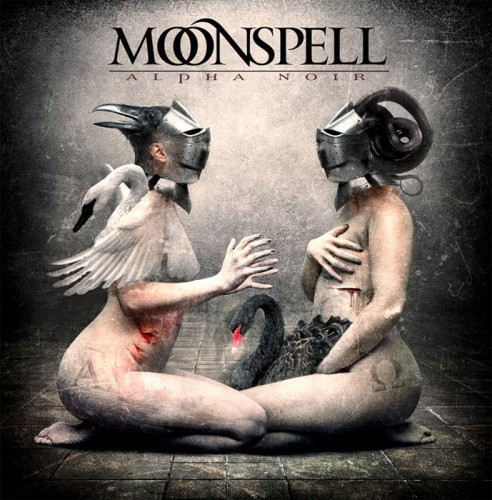 I’m getting yet another slow start this morning, but I have something to hold you while I finish the post I intended to finish last night.

If you couldn’t deduce it from their name, the Portuguese band Moonspell have a thing about werewolves.  They also have a new album due for release by Napalm Records on April 27 (May 8 in NorthAm) called Alpha Noir. There will also be a special edition of the album that includes a second CD called Omega White. The album features dual cover art by Seth Siro Anton, one of which you can see above.

Now, back to the werewolves. About a week ago, the band released an official video for an Alpha Noir song called “Lickanthrope”, the title of which is kind of a play-on-words for another name for werewolf — “lycanthrope”. There’s some licking in this video, as well as other scenes of debauchery and weirdness in a bar that’s probably not like the ones you may patronize. Red Riding Hood also makes an appearance, and of course there’s . . . the change. Must have been a full moon rising when they filmed this.

The video has way-above-average production values, and the song is a scathing yet addictive romp. Amuse yourselves after the jump, and I’ll be back with something else soonish.