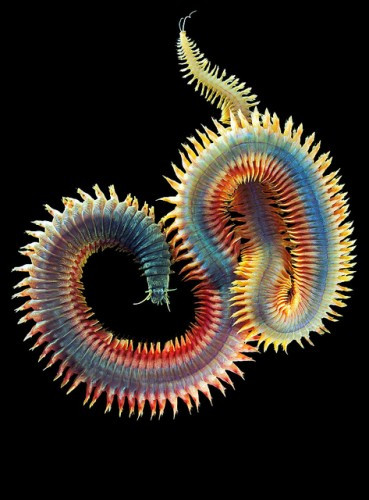 A solid month has passed since I posted the last installment of this series, and I’ve accumulated lots of shit for this one. I couldn’t bring myself to cut it back too much, so this installment is chock full of images and videos that I thought were metal, even though they’re not music. Felicitously, some of these items make nice pairings with each other. And though this is long, what else are you going to do on a Sunday? Give your hedgehog a bath? Inscribe new sigils on your arms with razor blades? Loll around in your underoo’s wondering what to do next? Do this next . . .

It’s almost a requirement that these posts include non-human weirdness from the natural world, so I thought I’d go ahead and get that out of the way from the top. Above is a photo (by Alexander Semenov) of a sandworm — more specifically a King Ragworm. They live in mudflats. They often reach great lengths, sometimes exceeding four feet. All of those legs protruding from the body not only provide a means of locomotion, they are also external gills through which the creature breathes. The King Ragworm also bites, and has been known to bite people.

If I came across one, I’d be conflicted by the impulse to get the fuck out of there as fast as possible and the desire to gaze upon its beauty. So I’d probably stand and stare, and wet myself. (via TYWKIWDBI)

Sticking with strange imagery, the next two items aren’t gif’s, though they do seem to move. Instead, it’s your damned eyes that are moving, even when you think they’re not. Those movements are called microsaccades. Even when we’re staring at a still object, our eyes keep darting around. Those movements “help us compensate for a peculiar property of the eye: if we stare at an object for too long, the signals each photoreceptor sends to the brain become weaker. Microsaccades refresh the photoreceptors with a different input and breath new life into our perception.”

The following images take advantage of that phenomenon to create the illusion of movement. And I thought this happens only when I get wasted, when everything moves of its own accord. 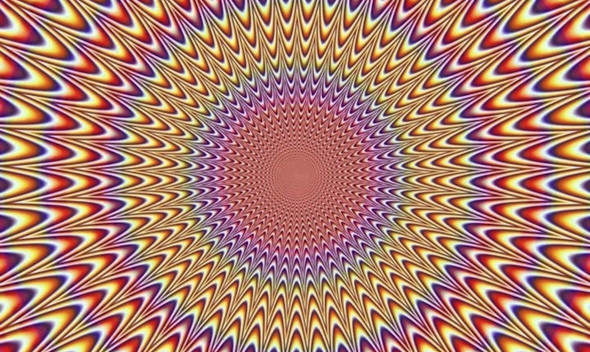 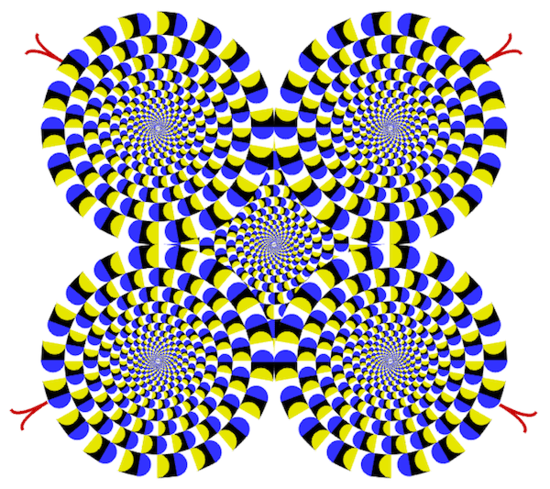 To appreciate this next item, first watch the short video below. The key part is at the end, when the Emperor penguins rocket up out of the water to reach land. This is almost as awesome as that video of penguins in flight that we featured not long ago, except this has the advantage of being real. As you watch, ask yourself, where do those trailing bubbles come from?

Now, as cool as that is, what makes it even more metal is a discovery that a team of scientists made while studying this same video: the bubbles are coming from the penguins’ feathers. They raise their feathers to fill them with air on the surface, and when they dive, the water pressure compresses the air. As they rocket to the surface, the air expands and pours through the feathers.

This coating of air bubbles acts as a lubricant, drastically reducing drag, enabling the penguins to reach lift-off speeds. It’s the same technique that engineers use to speed the movement of ships and torpedoes through water. More details can be found via this link.  (credit again to TYWKIWDBI)

Okie dokie, time for sporting events. I think only the British could have invented the following competition. It’s the Royal Navy Field Gun race. Teams of British sailors compete to transport a fucking field gun through an obstacle course in the shortest possible time.

The origins of the field gun competition lie in the Second Boer War in South Africa, when a British garrison was besieged in the township of Ladysmith in 1899. In support of the British Army, the Royal Navy landed guns from HMS Terrible and Powerful to help in the relief of the siege. The Naval Brigade transported guns over difficult terrain and brought them into action against the Boers.

Thinking how much fun that must have been, the British Navy decided to turn it into a sporting event. The race was held annually at the Royal Tournament in London from 1907 until 1999, apart from the periods during the World Wars.

This is a video of the last race in 1999. Watching it blew my fucking mind. I mean, on one level it’s totally bizarre, but on another level the teamwork, the strength, and the risk-taking are phenomenal and exciting to watch. If you’re like me, you’ll be hooked all the way through to the end.

(via TYWKIWDBI, yet again.)

The British don’t have a monopoly on weird, physically risky sporting events. In this next video, you can see the setting of a world distance record in the Dutch sport called Fierljeppen, which in Frisian roughly translates to “farjumping”. It seems obvious that this dude set the record because the pole stayed vertical long enough for him to shimmy himself all the way to the top. Pants-shitting stuff.

By the way, if you found yourselves imagining all the ways this could go wrong, here’s some tangible evidence:

Books are fun. And they are especially metal when they’re made using anthropodermic bibliopegy, which is the process of binding books with human skin. Lots of fascinating details about the history of the process can be found here. Below is a notable example. This pocketbook is housed at the Surgeons’ Hall Museum in Edinburgh, Scotland. It’s bound in the flesh of William Burke. Between 1827 and 1828, Burke and his accomplice, William Hare, drugged and killed 16 people for the sole purpose of selling their bodies to the anatomist, Dr Robert Knox.

Burke was eventually found guilty of the murders and hanged before [ironically] being dissected in Edinburgh Medical College, which I suppose is further proof of the point that what goes around comes around. Now you know what happened to Burke’s skin. 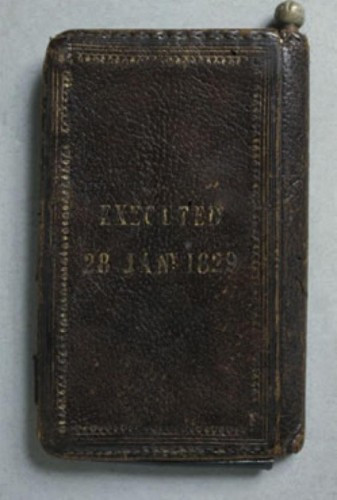 This seems like a practice that should be brought back. I mean, nowadays something like half of all dead people in the U.S. are being cremated instead of buried. Why not use their skins to bind coffee-table books or photo albums with pics of the deceased so their loved ones will have a daily tangible reminder of the dearly departed? Would be a big seller, no?

(Thanks to Ben C. from Church of the Riff for the link that inspired this item.)

Sticking with books, we turn next to the amazing Brian Dettmer, who lives in Atlanta. Using knives, tweezers, and surgical tools, he carves books, one page at a time, to create some astonishing works of art. He uses volumes such as out-of-date encyclopedias, medical journals, illustration books, and dictionaries. Dettmer manipulates the pages and spines to form the shape of his sculptures, but he relocates and implants nothing — he merely removes. He also folds, bends, rolls, and stacks multiple books to create completely original sculptural forms. Here are a few of his creations. You can see many more at this location. 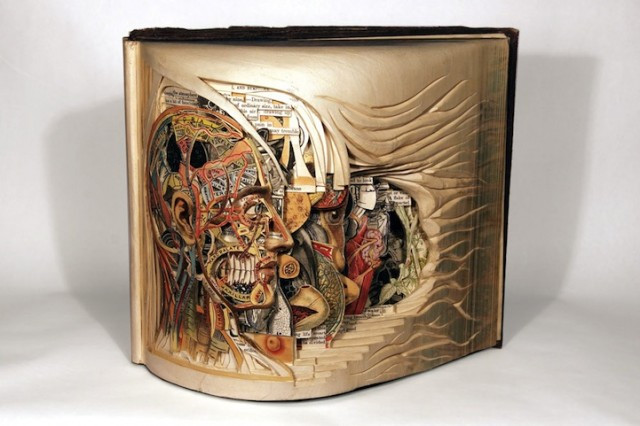 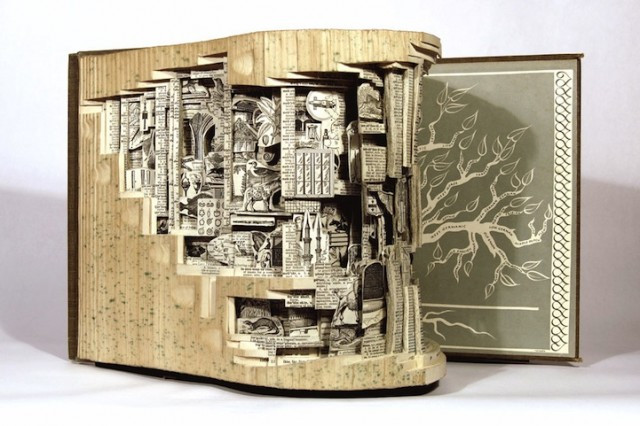 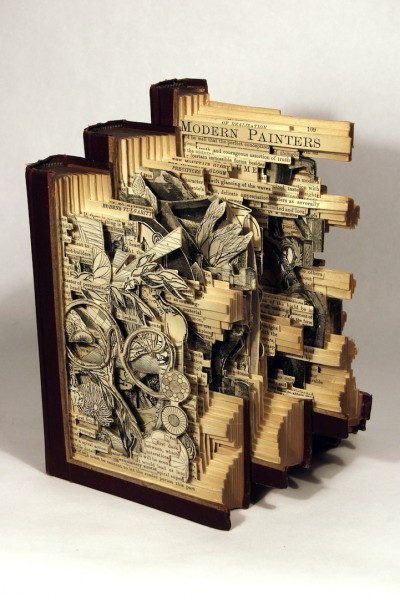 (Credit to Valley of Steel — he posted about these books on his FB page.)

This next video shows science leading to art. These are fifteen simple pendulums of increasing length in a row. When they are all set swinging at the same time and are viewed on end, they dance together to produce amazing images.

This pendulum apparatus was built at Harvard and filmed as part of the Harvard Natural Sciences Lecture Demonstrations. Way fucking cool . . . so simple, yet so amazing.

To wrap up this installment, I’m going to India for the last two items. Item Nine is a video filmed in Mumbai. The videographer has made a paper airplane, and he sends it flying out a window on the 18th floor of a building. It does really well on its own for a while, but then it gets an assist. Don’t leave this video too soon or you’ll miss it.

(thanks again to TYWKIWDBI.)

And now to finish: Holi is a religious festival celebrated in the spring by Hindus. It is primarily observed in India, Bangladesh, Pakistan, and Nepal. It is also known as Festival of Colors. Watch this video, and you’ll see why. It shows scenes of  the Holi festival in slow-motion high definition. It’s so beautiful, so exotic, so . . . metal.

Holi from Variable on Vimeo.

For more info about the people who made this, go here. (Credit to The Presurfer for the link.)