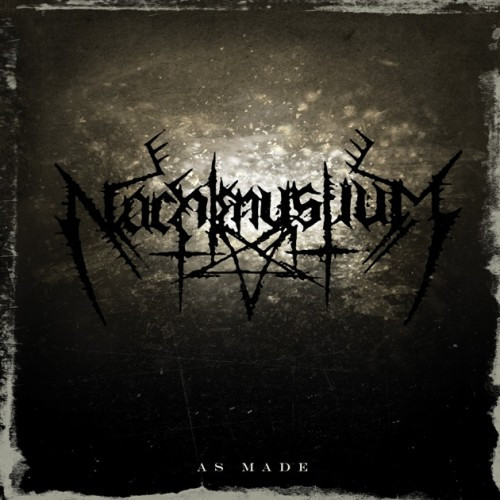 Near the end of each year, we pick a list of the year’s “most infectious” extreme metal songs — the ones that get stuck in our headss and won’t go away, the ones where you hear the first few notes months later and you know the song immediately. I just added a song to our list of candidates. It’s a track by Chicago’s Nachtmystium called “As Made”. It appears on a 7″ record by the same name that will become available for shipment on May 15 in black vinyl (limited to 500 copies).

Put out of your heads whatever you may think about Nachtmystium’s most recent album (or two), because this song is a rolling romp of black metal with Blake Judd vocals that sound like an acid bath. It gets in a groove from the start and stays there right through to the howling, feedback-laced ending. A little hook of a pulsing guitar lead and a metronomic drum beat insinuate themselves into your head, and damned if they aren’t still ringing in there long after the song is over. Or at least that’s my guess, because I haven’t stopped listening to the song since I first discovered it.

And along the way, there are some sweet blasts of double bass and fuzzed out guitar slams.  Prime, Fuckin’ A, rockin’ out material.

I really hope this song becomes available to people who don’t have turntables. For now, at least, it’s available for streaming at Invisible Oranges via THIS LINK. More info about the release is after the jump.

In addition to “As Made”, the 7″ will include Nachtmystium’s cover of a Joy Division song called “The Eternal”, which features vocals by Chris Connelly (Revolting Cocks, Ministry).

People in the U.S. and Canada can order the vinyl via CMDistro at this location. I don’t know whether a different version of this will be made available to people elsewhere on the globe. But you can listen now, at least.

3 Responses to “NACHTMYSTIUM: “AS MADE””