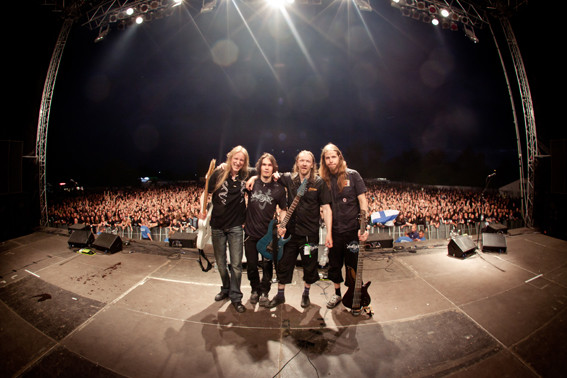 Specifically, after 8 years since this Finnish band’s impressive debut, there will be two albums: Time I and Time II. Each album will contain approximately 40 minutes of music — 80 minutes of new Wintersun altogether.

Per the press release we received, the mixing and mastering of Time I is scheduled for completion in July, with release planned for the early fall. Time II will be released in 2013. We expect to see videos and teasers over the summer.

There’s also this tour news: Wintersun have been confirmed to headline this year´s edition of the so-called HEIDENFEST tour kicking off in October, with support from Korpiklaani, Varg, Trollfest, and Krampus — and after that, Wintersun plans to tour the world. Well, they plan to tour parts of the world, but I don’t know which parts yet. For more info about HEIDENFEST, go here.

And to keep tabs on Wintersun’s progress toward release of the new albums, use these links:

And now, let’s all raise our voices together and say (at full volume): ABOUT FUCKIN TIME!!!