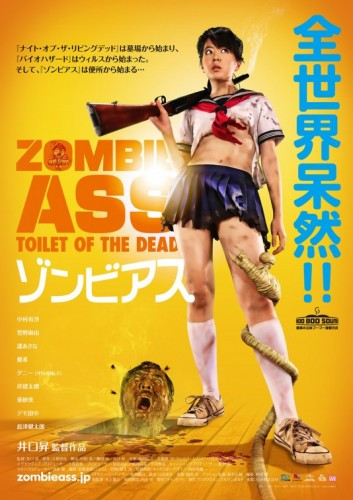 Phro has obviously been spending way too much fucking time on his own blog or I would have found out about this movie from him instead of having to read about it on Skeletonwitch’s FB page.

Just when you think zombie filmography has become so saturated that there’s nothing new to say about zombies, we get Zombie Ass: Toilet of the Dead. Leave it to the Japanese to take a tired old cinematic trope and breathe new life into the shit. I mean, don’t get me wrong: I like a crap zombie movie as much as the next dude, but they get kinda boring after a while — even when real life starts imitating art. But there’s a difference between a crap zombie movie and a craptastic movie with shit zombies and hot, gun-toting Japanese chicks wearing schoolgirl uniforms, which seems to be required dress for all hot Japanese chicks.

Zombie Ass, which premiered at a film festival in Austin, Texas (?!?) last fall and had its Japanese premiere in February 2012, was made by renowned Japanese director and legendary ass-fetishist Noboru Iguchi. It seems to involve poop-covered zombies crawling from outhouses, mutant intestinal parasites, and a lot of potent farting. Sounds awesome, no?

The odds of me seeing this movie are zero, but the “international” trailer for the film — complete with garbled English voiceover and titles — is fucking hysterical.  Okay, to be more precise, it’s hysterical if you have a really juvenile, scatalogical sense of humor like I do, and I’m pretty sure you DO have that kind of sense of humor, or why else would you be wasting your time at this site?

Go ahead: admit it.  You want to run right out and get a copy of this, don’t you?

Seems like we ought to have a metal soundtrack for this thing. There should be a place in it for these songs:

15 Responses to “ZOMBIE ASS: TOILET OF THE DEAD”