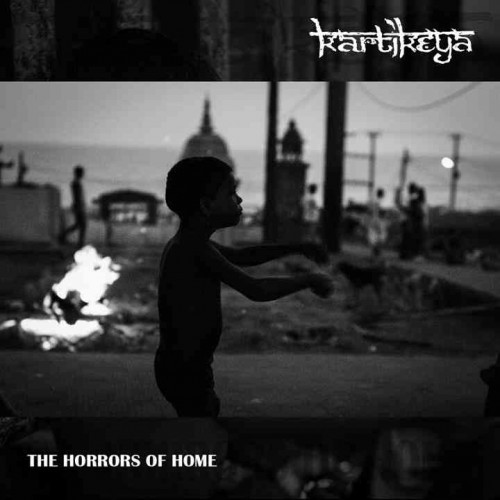 At NCS, we follow Moscow’s Kartikeya like hawks, because their music is excellent, because they don’t sound quite like anyone else, and because they don’t stand still. The band are at work on a new album, to be called Samudra, which we understand should be ready for release later this year, and they’ve been teasing their fans about a new single from the album to be released June 22.

Well, it may only be June 21 in the U.S., but it’s June 22 in Russia — and so the song is ready for release now. And to our very happy surprise, we get to premiere it!

The single is called “The Horrors of Home”, and the artwork features the photography of Greg Shanta. The song itself also includes some noteworthy guests, in addition to the members of Kartikeya: NCS favorite Keith Merrow, who contributes a winding, rippling guitar solo, and vocalist Aleksandra Radosavljevic.

“The Horrors of Home” may be the most multi-faceted piece of music that Kartikeya have yet created, combining complex hammering rhythms, passages of ethnically-influenced dreamlike ambience (made even more otherworldly by Aleksandra Radosavljevic’s wordless vocals), a soaring chorus, sections that put me in mind of the dark melodic death metal of bands such as Insomnium, and maybe even a flavor of Devin Townsend and Machina-era Smashing Pumpkins. And the male vocals on the album really provide an array of tones — from bestial death metal howls to blackened shrieks to rousing cleans.

Do listen to this piece of dark, transfixing music right after the jump . . . and then we’ll tell you how to get it for yourself.

To download this song for yourself, go to Kartikeya’s Bandcamp page using THIS LINK.

If you’re new to Kartikeya, you can find out more about their previous releases by checking out our previous posts about the band via this link. And here are links for Kartikeya’s various web pages:

13 Responses to “AN EXCLUSIVE NCS PREMIERE: “THE HORRORS OF HOME” BY KARTIKEYA”