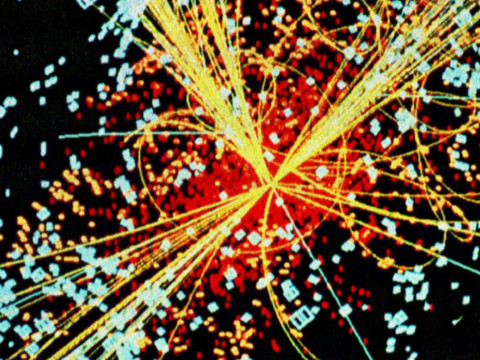 July 4, 2012. It’s a date you should remember, and not because it happens to be the 236th anniversary of the U.S. Declaration of Independence from Great Britain. No, that’s far too parochial an event compared to the announcement that’s the subject of this post. What was revealed today is a genuine milestone in the history of humankind’s quest to understand the structure of matter in the universe and to develop an overarching theory of nature.

To state it simply, what was announced today is the near-certain confirmation of the existence of the Higgs boson, which is often popularly referred to as “the God particle” because, in the words of Leon Lederman, who coined the term in the title of his popular science book on particle physics, it is “so central to the state of physics today, so crucial to our understanding of the structure of matter, yet so elusive.” (Lederman also explained that he chose the term because “the publisher wouldn’t let us call it the Goddamn Particle, though that might be a more appropriate title, given its villainous nature and the expense it is causing.”)

There’s an even larger narrative in which this news plays a pivotal role. You might wonder what could be larger than understanding the fundamental rules by which the universe exists and functions, but to my way of thinking this is further vindication of the idea that nature can be understood through the rational working of ever-questioning human minds, that our curiosity about the universe can be answered through the scientific method — and that’s metal.

To understand the importance of this announcement requires more than a bit of background information. I’m no scientist, of course, but I’m going to do my best to sum up the key info based on what I’ve been reading today (instead of listening to metal). The explanation involves the “Standard Model” of particle physics (sometimes called the “theory of almost everything”), the world’s largest machine, and a 25-year quest to confirm a theory about what gives all matter its mass (the quality we feel as weight).

At a fundamental level, much of physics has been devoted to developing and understanding the laws of nature that govern the behavior and interaction of all known forms of matter and energy. A major goal has been to find the “common ground” that would unite all these laws into one integrated “theory of everything”.

The “Standard Model” of particle physics is a key piece of such a theory. It concerns the interaction of three of the four basic forc­es known in the uni­verse: the weak force re­spon­si­ble for the ra­dioac­ti­ve decay of subatomic particles; the elec­tro­mag­netic force; and the strong force re­spon­si­ble for the ex­ist­ence of pro­tons and neu­trons at the core of the atom (the fourth force being gra­vi­tat­ion, as described by general relativity).

The Standard Model, as finalized during the 1970s, has been a widely accepted model used to describe the fundamental particles from which we, and every visible thing in the universe, are made, and the forces acting between them. But it has depended critically on the existence of something never proven to exist: the Higgs boson.

The Higgs particle is something that had to exist if the theory were to be valid — under the Standard Model, it’s the particle that gives mass to electrons, protons, and neutrons (the fundamental particles we are all made of) — but until recently its existence was never proven. 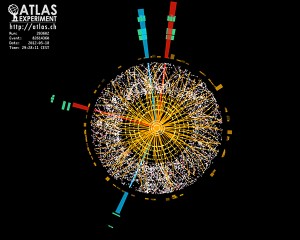 Proving its existence was extraordinarily difficult because although it was predicted to be extremely massive, the Higgs boson doesn’t live very long. Merely to create the conditions necessary to test its existence required the construction of the world’s largest machine — the Large Hadron Collider (LHC) at CERN.

What, you may ask, is CERN? It’s the European Organization for Nuclear Research, located in the suburbs of Geneva on the border between Switzerland and France. It operates the world’s largest particle physics laboratory, it’s the birthplace of the World Wide Web, and it was responsible for building and operating the LHC.

The LHC is a particle accelerator — a circular tunnel 17 miles (27 km) in length that’s buried deep underground. When the LHC is in operation, it fires two proton beams at each other through the use of super-conducting magnets at virtually the speed of light, each one fired with the energy of 3.5 – 4.5 trillion electron volts. It smashes these beams into each other at such high energies that the protons explode, creating energetic particles that should include the Higgs boson — if the Higgs boson really existed.

If the Higgs existed, it would decay rapidly, giving off a characteristic bit of energy that could be detected and measured. As one article I read explained: “The problem is, lots of things give off that much energy, so you have to see the Higgs signal on top of all that noise. So, you have to collide particles over and over again, countless times, to build up that tiny signal from the Higgs decay. The more you do it, the bigger the signal gets, and the more confident you can be that the detection is real.”

And finally, that brings me to the announcement that CERN made today: Two different detectors at the LHC both independently found a strong signal at an energy level that indicated the existence of a new particle at a 99.9999% confidence level — and that new particle is within the range of mass that the Standard Model predicts for the Higgs boson.

There’s still an extremely small chance that the new particle which CERN detected is not the Higgs boson, but what was reported today seems very close to certainty — to the extent certainty can ever be achieved in science.

So what we have now, almost 50 years after the Higgs bosun was predicted to exist, and after 25 years of effort, is proof of the existence of a thing that gives all matter its mass.

Pardon the pun, but that’s very fucking heavy. And it’s heavy on more than one level. As one knowledgable writer put it:

“Never forget this either: we humans did this. The discovery of this new particle, and the vast potential it has, was all because we’re curious. This huge machine, the LHC, was built solely because we wanted to find things out, and some people had the vision to fund it and build it. When we wish to explore, when we wish to see what’s over the next hill, wonders unfold before us.”

Speaking of wonders, now think about this (and I quote from the CERN press release):  “The Standard Model describes the fundamental particles from which we, and every visible thing in the universe, are made, and the forces acting between them. All the matter that we can see, however, appears to be no more than about 4% of the total. A more exotic version of the Higgs particle could be a bridge to understanding the 96% of the universe that remains obscure.”

And what do scientists call that 96% of the universe that we can’t see? What do they call that hypothetical form of energy that is theorized to permeate all of space and to accelerate the constant expansion of the universe?

And to finish this off, we need some music. You can probably figure out why these two songs leaped to mind (and thanks to NCS reader iGark for reminding me about the second one).

GOJIRA: “The Heaviest Matter Of the Universe”

[audio:https://www.nocleansinging.com/wp-content/uploads/2012/07/06-The-Heaviest-Matter-of-the-Universe.mp3|titles=Gojira – The Heaviest Matter of the Universe]

A big thank-you to Phro, who was the first person to tip me off to the news reported in this post.

Here are the principle sources I used in writing this piece: