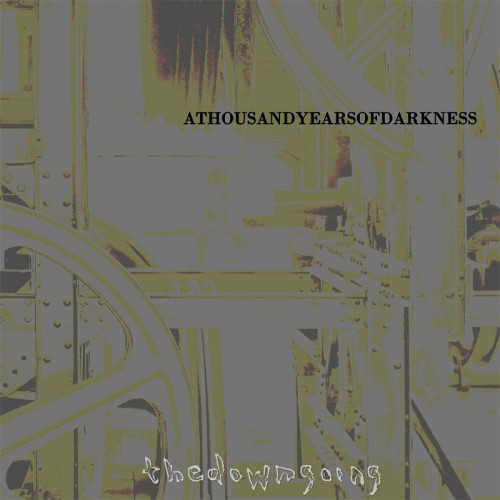 I first heard about this band as a result of a 2011 year-end list by Alex Layzell (Grind To Death) that we posted last December (here). In that article, Alex was singing the praises of thedowngoing’s Untitled EP. More recently, he’s been singing the praises of ATHOUSANDYEARSOFDARKNESS, so I decided I should check it out.

It doesn’t take long — 12 songs run roughshod through your skull in almost exactly 10 minutes, leaving a smoking wreckage of pulp in place of what used to be your brain.

The stringed instruments are so distorted that they sound like a combination of industrial-strength sandblasters and the ongoing explosion of an overloaded transformer. The drumming bolts from recognizable rhythms to sheer off-the-hook mayhem, one freaked-out detonation of percussion after another. The vocals are as utterly and completely deranged as any I’ve ever heard, with high-pitched shrieking that could not possibly leave any normal set of vocal chords intact and gruesome growls that would frighten bears.

The music is like a violent physical assault by a horde of bat-winged things with blood eyes and teeth the size of steak knives. Why would anyone want to experience such a thing? Here’s my theory: because, given the right stimulus, the body makes drugs for free, and a full-on adrenaline rush is a pretty sweet ride.

For people with a taste for violent grindnoise, ATHOUSANDYEARSOFDARKNESS is an intense experience that’s very tough to beat. The music can be downloaded at Bandcamp for a price you name or ordered on CD from the same location: HERE.

Fasten your seat belts, and get ready to scream: