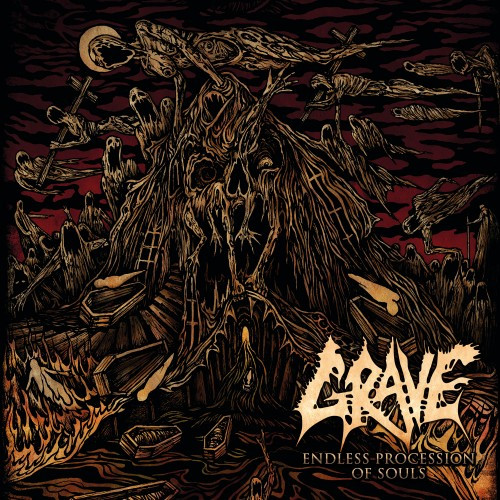 In a year that has delivered a hearty helping of very good old-school, Swedish-style death metal produced by a phalanx of newer bands, the tenth album by Grave is still the one I’ve been most eagerly anticipating. Not that the newer bands can’t grasp and execute on the basic blueprint, but after all, Grave helped draw the blueprint in the first place more than 20 years ago and they’ve been turning out solid albums ever since.

Only Ola Lindgren is left from the original line-up that gave the world Into the Grave in 1991, but he ‘s been the heart and soul of the band for such a long time that it doesn’t much matter. On Endless Procession of Souls, which marks the band’s return to the Century Media label after a two-album dalliance with the now-defunct Regain Records, Lindgren is joined again by drummer Ronnie Bergerstål, who’s been the hitter since 2008’s Dominion VIII. Two new faces round out the current line-up — second guitarist Mika Lagrén and bass-player Tobias Cristiansson.

Together, they’ve created 10 new songs that will cause most die-hard fans to salivate, though it may not be without controversy for some. For my money, Endless Procession of Souls is one of the best old-school death metal albums of 2012 and a worthy addition to this legendary band’s evil discography. 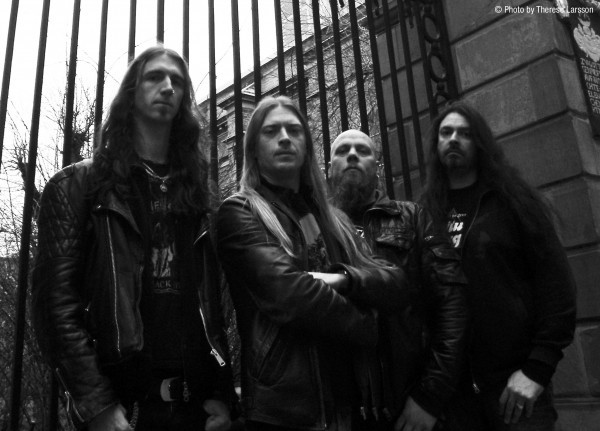 I’ve observed before that this style of death metal can’t be tinkered with too much without causing it to lose its primal appeal. The very adherence to root principles that causes some metalheads to turn away in search of new and different forms of extremity is the very soul of this “soulless” music. You mess with it too much, and you’ve broken faith with the genre.

Grave’s new album stays close to the original design in most respects. It effectively drenches the proceedings in a cascade of gore and moldering cemetery earth. Minor key chords and diseased melodies abound, like the moaning and groaning of wraiths in limbo. The guitars are tuned down and the distortion is dialed up (though not as low-tuned and distorted as you’ll hear in early Entombed and Dismember, or even in some of Grave’s earliest work).

Rapid riffing creates that trademark grinding-guitar buzz, jittery tremolo-picked bursts create a feeling of queasiness deep down in the guts, and echoing solos scream like frenzied banshees and writhe like hungry maggots.

Ronnie Bergerstål’s drumming also keeps the faith with the old school. There’s a lot of d-beat and double-bass in his rhythms, but blasting is almost non-existent. It’s more of a controlled rumble, thunder, and roll than manic mayhem or high-wire acrobatics, and it suits the music so damned well.

And of course, Ola Lindgren’s ragged roar effectively conjures up images of marauding, red-eyed beasts. He doesn’t drop down into truly guttural range, but he can still cause the hair to stand up on your arms and he vents some extended howls on this album that I suspect would attract interested packs of wolves in a Scandinavian forest.

But although Lindgren and company in most respects follow the original blueprint, they’ve also built into the music some ingredients that keep things lively and interesting — though maybe some of those ingredients would cause real died-in-the-wool, early-90s purists to scoff.

The production isn’t as raw and primitive as some of Grave’s earlier albums. Despite the distortion in the bass and guitars, there’s still enough clarity and separation in the sound that you can hear what’s happening at each position. Don’t get me wrong — the sound is far from “clean” or “sterile”; it still has plenty of filth in the gears, as this kind of death metal must, but a muddy wall of noise it isn’t.

The tempo of the songs is also dynamic. In almost every one, the band move back and forth between rumbling thrash-influenced attacks and lumbering death/doom breakdowns, reaching truly funeral levels of slo-mo trudging on tracks such as “Amongst Marble and the Dead”, “Disembodied Steps”, and the long closer, “Epos”.

And then there’s dat groove. Yes, there’s a noticeable injection of it in many of the songs, with slight spaces in the sound leading to synchronized bass-and-drum clobbering, and fat chugs that you can’t not headbang to. “Disembodied Steps” is a prime example, and “Winds of Chains” is another. The later even includes some classic heavy metal riffing that made me think of Black Sabbath but with a lot more tombstone, and the back end of that song features a big, slow riff that makes headbanging compulsory.

“Encountering the Divine” is another especially catchy track, with more examples of classic heavy metal riffing in the mix and a death ‘n’ roll beat to go along with the d-beat scampering.

I suppose the more pronounced groove orientation of some of these songs will turn off fans who want their old-school death metal to hold fast to the brutal and the vicious, but I thought it helped make the album an engrossing 45 minutes, from start to finish. I recommend it without hesitation.

Two songs from the album have premiered so far. “Passion of the Weak” had its debut on Decibel at this location, and that song is now officially up on YouTube, so I’ll embed it below in case you missed it earlier. And as of yesterday, CVLT Nation began streaming “Perimortem” here.

Endless Procession of Souls will be released on August 27 in a variety of formats, including a limited box set that will include a second CD with three bonus cover songs — “Killing Technology” (originally by Voivod), “Efilnikufesin (N.F.L.)” (originally by Anthrax), and “Mesmerized” (Celtic Frost). Pre-orders can be placed here. Grave links are just below, and the new album’s track list follows those: