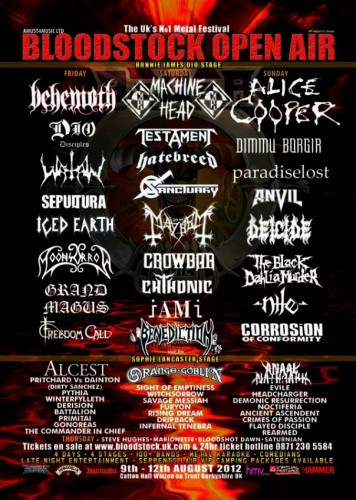 (Our NCS comrade Andy Synn has recently been making me green with envy by attending summer metal festivals on the other side of the Atlantic, which for me might as well be on the other side of the solar system.  However, gentleman and scholar that he is, he didn’t just go and have a ridiculously good time. He also sent back this review of his jaunt to the UK’s BLOODSTOCK festival on August 10-12, 2012. We’re dividing it into two parts, with Part 2 coming up tomorrow [now posted here].)

Ah, Bloodstock. Always an interesting festival, caught between its early power/trad-metal roots and its steady expansion into a more rounded, extreme/non-mainstream metal festival. This year’s line-up was pretty enticing, but circumstances and finances looked set to prevent my attendance. But fate and serendipity stepped in (thank you Sahil!) and on Friday 10th of August I found myself once more pulling into the festival’s parking lot, with a song in my heart and a shiny guest wristband on my arm.

Carefully timing my arrival to coincide with that of Moonsorrow, I wasn’t disappointed, the band utterly on fire, despite the occasionally washed out sound. It helps that the set-list comprised some of my favourite Moonsorrow tracks, I’ll admit that, but the performance itself was brilliant either way. The only downside is that, due to the length of their material, it always seems like too few songs

Sepultura put on a damn good show, their new drummer certainly doing his best to live up to Igor Cavalera’s enviable legacy, while the triptych of Derrick, Paulo, and Andreas showed again and again why they stuck with the name – they just do it all better. The new material sounded great live, while the quartet give the old stuff, including a brace of Beneath The Remains-era material, new life and vigour. Props as well for the welcome, but unexpected, guest slot from Tim “Ripper” Owens on “Territory”.

Dio Disciples were, in many ways, something of a curiosity for the festival. Essentially Dio’s band with a different singer (and a few guests), it’s hard to judge them on merit alone, as their appearance was due to far more than just an ability to play the songs well. This was a tribute to one of the genre’s legendary figures, and while it would be churlish to say it was simply a well-received cover set (the downright dedication to this band’s slot bordered on the fanatical), one can’t help but be moved by this show of respect, and by being reminded of the sheer quality of the material on display. 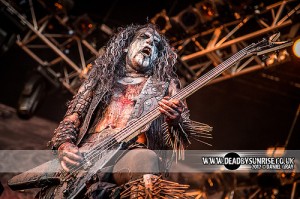 There’s been a lot of crap flying about the internet about having Watain moved to the penultimate slot, lots of unfounded rumours about them refusing to play or other such scurrilous behaviour, but in all honesty having them go on before the headliner made a lot more sense, particularly with the more impressive stage show and pyro they brought with them. I’m all for nostalgia and paying a deserved tribute to Dio, but having his disciples sandwiched between Watain and Behemoth would have been a real mistake and would have killed the momentum. As it stands, Watain put on a killer performance, heavy on mood and atmosphere, a black mass of raging Satanic invective and scathing, ripping guitars. Blackly beautiful stuff.

The much-anticipated return of Behemoth had everyone’s ears buzzing. Were they ready for a headlining set? You only really get one shot at being considered as “A Headliner”, and if you don’t live up to it… well, then you end up back down the bill for the rest of your career — you missed your shot. Thankfully, these worries were completely unnecessary. Behemoth absolutely dominated from the first note. Nergal played the role of deathly ringmaster to perfection, while man-mountain bassist Orion showed that he’s essentially a second front-man for the band, carrying vocal lines and between song exhortations with an almost equal level of fervour. Seth has fully cemented himself as a key part of the band’s anti-life equation, while drummer Inferno is just unceasingly brutal.

The finale of “Lucifer” saw the band receding into a shroud of smoke as they played out the last, haunting instrumental bars of the song, disappearing into the darkness. When the smoke cleared, the band were gone, and the set was over. And Behemoth had changed the game. 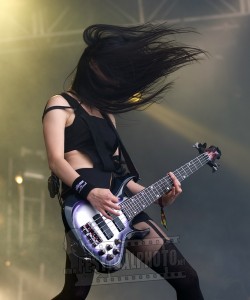 A nice late wake-up for me on the Saturday put me in better spirits and higher energy levels (I came straight from work on the Friday, you see), so after a morning of lying around doing precisely fuck-all, I finally wandered into the arena to catch Chthonic do what they do best. Putting on a hell of show, despite their early slot, the group cherry-picked the best of their material, matching anthemic grandeur to whiplash metallicisms. Freddy Lim is a phenomenal vocalist, as well as a great live focal point for the group, but each member had his or her own distinctive stage presence. Lim’s rants about the situation with China and Taiwan (and his venom at the term “Chinese-Taipei”) showed that the group’s activist streak is alive and well, though you had to wonder how many of the audience chanting “Taiwan! Taiwan!” really had much of a grasp of the political situation, and weren’t just chanting along for the sake of it!

Never less than solid, the lead-heavy grooves of Crowbar provided a nice contrast to Chthonic’s more slicing and ethereal sound. The sludge-monsters know how to create their own atmosphere, that’s for certain, dragging those gargantuan riffs up from the depths time and time again, unleashing each one with a tar-thick layer of brutal charm. Honestly, though I’ve seen them do better shows, they still delivered the goods today, and even a less than stellar Crowbar show is still pretty damn good.

More thoroughly disappointing was the uninspired and utterly unenthusiastic set performed by Mayhem. Let down by the sound mix (with emphasis on clicky kick drums and Attilla’s lunatic vocalisations), the five members still didn’t do themselves any favours with their lacklustre and disinterested performance. One thing though – Attilla Csihar has basically morphed into the black metal equivalent of Michael Winslow from the Police Academy movies: his vocal range is impressive and varied, but you really have to wonder what the long-term point is…

Winterfylleth have quietly grown into something quite special, and I’m kicking myself for not getting on the wagon in the early days, as pretty soon there won’t even be standing room left. Their lengthy, epic take on folk-inflected, post-black metal stands out as something unique in a sea of imitators, delivered with such awesome power and conviction that it brings a tear to the eye. Keep an eye on these men – they’re already a phenomenal band, now we’re just waiting for them to explode.

One of several ‘controversial’ choices for the festival, Hatebreed did a surprisingly good job of things, connecting well and inspiring the crowd to an impressively energetic response. I certainly can’t fault them for stepping up in the face of a potentially hostile/dismissive audience. I would fault them though on the fact that their material is growing ever more samey and derivative, with nothing to really challenge that comfortable status quo. Oh, and Jamey Jasta’s stage-banter – that very American pseudo-self-help-jargon spouted between every song, dedicating each one to “anyone, anywhere, who’s ever done anything” — comes across as quite cheap, and gets a little tiresome. Yet they persevered (pun intended) and brought a smile and a headbang to a large proportion of the crowd.

Testament almost stole the show from the headliners with a perfectly paced and played set of old and new classics. Chuck Billy is just the most consummate frontman and vocalist, while every track serves to remind you why Testament are better than their peers – every riff just has that certain special something, and nothing is put into a song that isn’t utterly vital. Having Gene Hoglan on drums certainly helped matters as well, adeptly handling the neck-snapping grooves of the early classics (“Into The Pit”, “Over The Wall”) just as well as the bone-breaking aggression of the modern ones (“D.N.R.”, “More Than Meets The Eye”) with the addition of his own signature style. Just one thing though – when did Alex Skolnick become so irrepressibly camp? 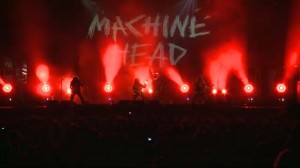 One of the most controversial choices for this year’s festival, Machine Head were derided by many as not being of headliner stature, or of being “too mainstream” for the festival. As such, it was going to be interesting to see what they could bring to justify their slot headlining the second day of the festival. And blow me down, I think they just about managed it.

Some technical faults and Robb Flynn’s occasionally asinine stage banter at times threatened to derail things (the more drunk he got, the dumber his pronouncements became – at one point he effectively stated that people who listen to dance music are bad, people who listen to metal are good – yeah Robb, it’s definitely that black and white), but at other times his clear passion and pleasant surprise at how far they had come were actually rather endearing. A couple of the new songs came across as rather mawkish and falsely-emotional, but the rest was pure gold, from the old songs to the newer ones, each hammered home with a truly crushing guitar tone.

The band ended things on a high note (ignoring the increasingly incoherent post-set babblings that took place as the band thanked the audience), and put themselves in prime position to be considered as a future festival headliner. The challenge was there, and I’ll admit that Machine Head certainly stepped up to it.

EDITOR’S NOTE:  To be clear, I’m still very fucking envious. Also, full-set streams of many of the performances Andy reviews in this post can be found at Metal Injection here.