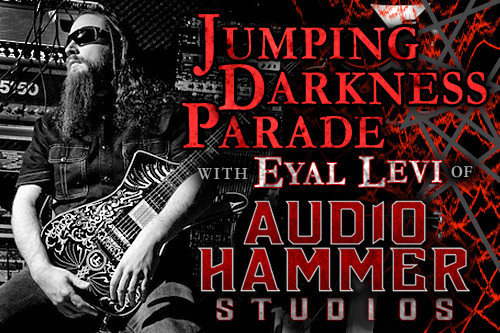 I hadn’t planned to post anything else today, but I just read something that’s so wise and so vividly expressed that I just have to pimp it.

It’s an article that just appeared at Metal Sucks by Eyal Levi, guitarist and co-writer of Dååth, co-creator of the wonderful Avalanche of Worms by Levi/Werstler, and a talented record producer with Audiohammer Studios (founded by Jason Suecof). The subject of the piece is creativity and inspiration, and how to deal with the unfortunate reality that inspiration can’t be summoned on demand.

In a nutshell, his messages are as follows: Understand and accept that no one can be creatively inspired 100% of the time — and don’t let the low points throw you; but also understand that creativity behaves like a muscle, and the more you work at it, the more natural it will become to achieve a creative state. This requires you to work hard, to force yourself to create even when the inspiration has deserted you, rather than to sit around and wait for that “elusive fucker” to show up again in its own good time. He writes:

“Treat inspiration like the bitch that it is. Move forward with or without it and you will find that it will tag along more often than not.  If you are in the habit of flexing that creative muscle as often as possible your ruts will be of shorter duration. Your next great idea will be that much closer.”

Levi writes primarily (though not exclusively) from the perspective of a songwriter and musician. I am neither, but I think his observations are just as valid when it comes to writing, or for that matter any other form of creative endeavor. What he says certainly fits my own experiences and my own observations of successful creative people I’ve known in my life. They are messages worth taking to heart.

It may seem counterintuitive to some, but I agree with Levi not only that creativity requires hard work, but also that by persisting in attempting to create even when your muse has deserted you, you will eventually find that the muse becomes your companion more often. It’s true that you still can’t summon inspiration on demand, but it’s also true that simply waiting for inspiration to strike is a losing strategy. By forging ahead even when you least feel like it, and by trying to do that consistently, you can help inspiration strike more often, strange as that may seem.

But Levi says all this, and more, much better than I can say it. I recommend you go HERE and read it for yourselves. It’s inspirational.

5 Responses to ““TREAT INSPIRATION LIKE THE BITCH IT IS”!!!”