If Condom Commercials Were Honest — powered by Cracked.com
(Sorry about the ad.)

It will come as no surprise to our readers that of all my many Facebook friends, most of whom undoubtedly have mistaken me for someone else, it was Phro and Phro alone who posted a link to the above video on his page. By being straight-forward and direct, it serves as a pointed reminder of how much bullshit we put up with in advertising. It made me think of how refreshing it would be if promotional campaigns for metal albums followed a similar formula.

Don’t get me wrong. I have cordial relations with many label representatives and PR folks, and I generally enjoy reading their album descriptions because they write better than I do and I admire good writing, except when I don’t enjoy their writing because they write better than I do. Also, I depend on them for advance access to music, which I appreciate because there’s not really a quid pro quo, given that even when I whip my lazy ass into writing a review it’s difficult for me to imagine anyone actually relying on my opinion in deciding what music to buy. This is why I always include music with the reviews. I may be stupid, but I’m not dumb.

Still, after seeing that video, I couldn’t help but fantasize about what the “Bag For Your Dick” approach to promotion would mean for metal PR:

“This album sounds like thousands of other deathcore albums with a few weedily riffs thrown in to make it sound “progressive”. It gave me diarrhea by the second track, but brainless teenagers will think it’s brutal. If any brainless teenagers read your blog, pimp the crap out of these hacks. Make sure you have the quart-sized Pepto Bismol on hand before you listen to this shit.”

“Here’s the long-awaited and highly anticipated new album by this band whose name I’d give my left nut to forget. And by ‘long-awaited and highly anticipated’ I mean these assholes have been auto-tuning and pro-tooling the living shit out of this pile of putrescence for the last year while getting high every night and bitching about their gf’s, who must be as retarded as the deluded dudes in this band. Whatever.” 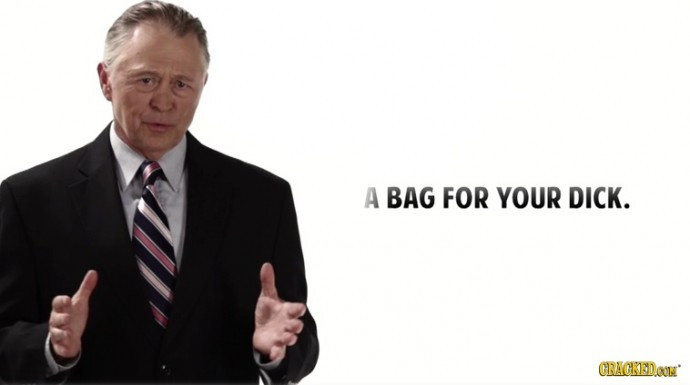 “After ten years of hard work developing a rabid cult following, which as far as I can tell consists of two in-bred cousins of the lead singer who were bit on the same day by a poodle with rabies, this band are set to explode on the scene like a popcorn fart in a movie theater. They insist on putting out their debut album on tape, apparently in the belief that people who have tape players lost their minds years ago and will listen to anything as long as it’s on tape. They may be right, so knock yourself out.”

“Refusing to follow trends and fads, such as the millenia-long trend of music you can listen to without developing nose bleeds and gastrointestinal cramps, this band have produced a rancid platter of satanic filth. And by that I mean that this is a rancid platter of satanic filth. With any luck these guys will plow their piece-of-shit car into a concrete embankment and meet their Master before they record a second album.”

“I dozed off halfway through the second track on this album and dreamed I was being fucked raw by Seabiscuit, which was an eminently more satisfying experience than listening to the first track and a half of this music. I suggest you use words like ‘ambient’ and ‘atmospheric’ in your review. I think they’ll go over better than ‘soporific’ and ‘numbing’. By the way, what’s your perspective on horse-fucking?”

“There are a lot of notes on this album. If you lined up all the notes, they would stretch from here to the Moon. I have to hand it to these guys: they play all those notes really fast. And while they’re looking at whatever I’ve handed them, I’d like to punch them in the nuts so hard their eyes would be replaced by testicles. Really small testicles. I hate this kind of music. I hate my life. I hate you.”

“This band have released a new music video. It took longer for them to iron their hair than it did to shoot the video. The guy who filmed it shoots porn films using amateur actors, chiefly his sister and his dad. I think my label paid for the video. The fact that they would pay for this video helps me understand why they would be dumb enough to pay me. Please put the video on your site so they will continue paying me. Do me this solid and I’ll leave you off the distribution list when the promos for this thing go out.”

“I’m sending you this press release about the new tri-state tour of the rad indie-rock sensations The Rainbow Unicorn Army With Sparkles. The fact that we’re sending you this means no one at our agency has ever read a single word on your web site, although someone somehow found the name of your site and your e-mail address and stuck it on our distribution list. The fact that we don’t give a fuck who you are doesn’t mean you should ignore The Rainbow Unicorn Army With Sparkles. We love you.”

“This is a press release. We’ve done all the work for you, with band quotes and everything. Just copy and paste it onto your site. What could be easier?”

“Old-school death metal is enjoying an unprecedented resurgence. This band of up-starts is far up the ass of the resurgence, faithfully copying the guitar tone, the riffs, and possibly the song titles of the legendary bands who created this music at a time when no one could stand to listen to it except far-sighted headbangers who are now in their 40’s and 50’s and see no reason to listen to anything but the originals, and therefore won’t touch this album with a 10-foot pole. If you can think of some way to make this sound fresh, that would be killer. I’m tapped out.”

“We are sending you a bag for your dick. It has the band’s logo printed on the side, though you probably won’t be able to fill it up enough to read the unreadable logo. None of this band’s fans will ever have any use for them, but that won’t stop them from buying these things and carrying them around. You can probably make a funny post out of this. We’ve read the dreck you put on that site and you seem to like funny things. Be funny, and carry on.”

14 Responses to “A BAG FOR YOUR DICK”