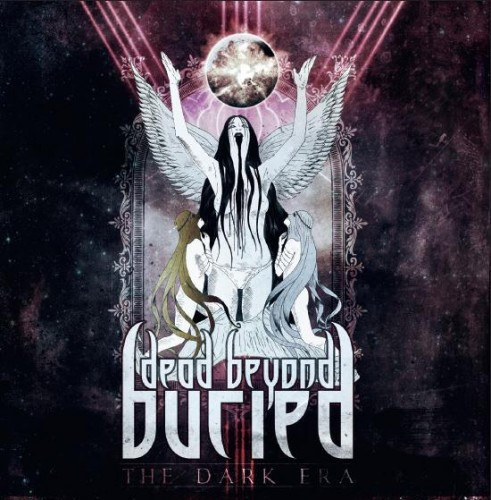 Man, what a surprise! The video, which was filmed, animated and edited by Joe Slatter (www.thedarkpower.co.uk), is one of the best I’ve seen this year. The animation, and how it alternates and eventually merges with the band performance, is fascinating. And the song itself . . .

. . . is a switch-up from what I remember from Inheritors of Hell. The furious (but groove-heavy) blasting death/grind isn’t gone, but “Cold Black Stars” is definitely a step up, and a step sideways. It includes waves of interesting (dare I say prog-like?) guitar melody and an intermittently slower pace, together with more sophisticated song-writing. But don’t get me wrong: the music still rips like a pack of famished wolverines. It’s just even more interesting.

And after seeing that video I also discovered that Dead Beyond Buried had previously released another song from the new album — “Dripping Black Bile”. I’ll hold off on any verbose descriptions, saying only that this song further cements my interest in the new album. If you don’t headbang to this jam, you should check yourself for a pulse. Also, it’s a free download right now at SoundCloud.

Back to the subject of doing your own thing your own way: After two label releases and some apparent frustration with the business side of the metal music industry, DBB have gone their own way, choosing to self-release their next album as a free download, “void of any 3rd party bullshit.” I’m all for people this talented making big stinking shitpiles of money off of their talent, but on the other hand “free” sounds damn good to me, especially if “free” also means that a band like this frees themselves to make the music they feel, without worrying about the consequences. At this point I’d say the consequences ought to be mighty good, for us and for them.

The Dark Era will be available for free download beginning on October 8 at www.deadbeyondburied.com. Dead Beyond Buried’s Facebook page can be reached via this link. Also, I’d like to say that the album art is fuckin’ cool — and it also visually sends the message that this DBB is a different beast from what we’ve known before. 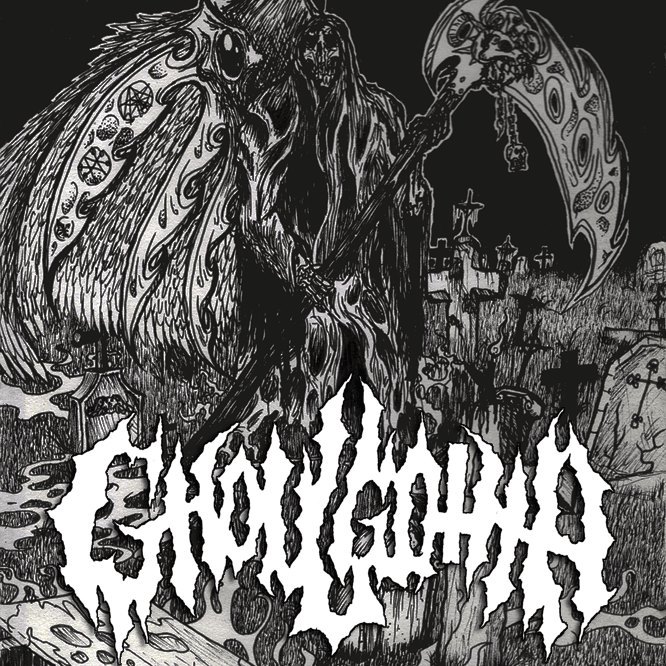 Ghoulgotha are a new band formed by vocalist/guitarist W. Sarantopoulos, a/k/a “Elektrokutioner” (Decrepitaph, Father Befouled, Encoffination, Wooden Stake, Festered, Scaremaker) after he relocated to San Diego. I found out about Ghoulgotha while trying to dig up current info about the latest vinyl release by Encoffination, since this new band will become Elektrokutioner’s main focus, given his move to Southern California.

It appears that Ghoulgotha have written an album’s worth of material and are now hunting for a label, though only one of the songs has been released for streaming to date as a single. That song is “No Peace To Rest In”. It’s a staggering, crushing, radioactive black hole of old-skull death/doom, with grinding guitars tuned to drop-Z and zombified vocals that sound like the gargling of blood in an undead throat. I fuckin’ loved the massive, rancid sound and utterly putrid aura of the music. Check it out — the song can be downloaded for free here. 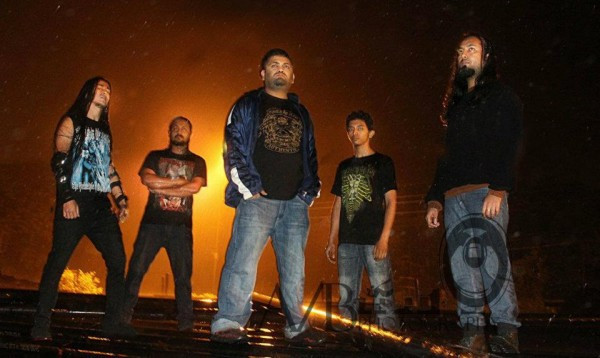 Duliajan is a town located in Assam. Assam is a state in the far northeastern part of India – so far northeast that it’s connected to the rest of the country only by a narrow corridor of land that runs between Nepal and Bangladesh. Diliajan is the home of a metal band named Shades of Retribution. They produced a debut album in late 2010 (Xongram) and are now working on a second full-length, ODHO-POTON, which should be released in 2013.

Last year they released a single called “Byortho”, which means “failure” in the Assamese language — and yes, the lyrics of Shades of Retribution are all in Assamese and reflect “the never ending quest for survival in this region.” I understand that the music also reflects Assamese traditions, and there are certainly melodies in “Byortho” that do sound pleasingly different to these ignorant Western ears.

I heard the song today because it’s the subject of the band’s first music video. The music is a blast of dark, technical, melodic death metal that I quite liked, with a mix of varied vocal stylings, all of which worked well — except for one that I found a little jarring, and you’ll have no trouble guessing which one I mean when you hear the song. I’d like to hear more from this band, and I hope they’ll finish that new album soon.

11 Responses to “RUMBLINGS OF THE BEAST: DEAD BEYOND BURIED, GHOULGOTHA, SHADES OF RETRIBUTION”