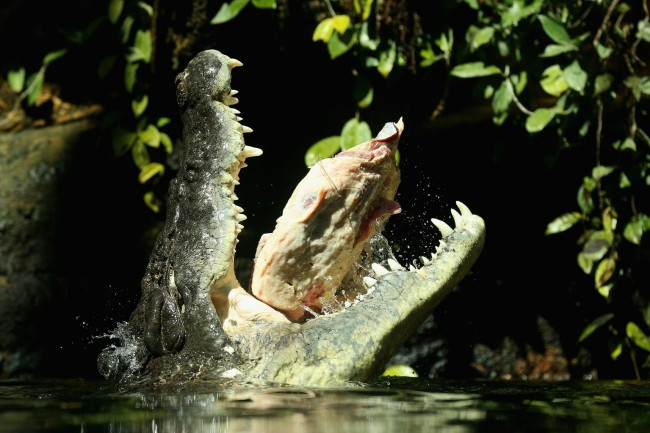 Welcome back, one and all, to this latest installment of THAT’S METAL!, in which we collect recent sightings of photos, videos, and news items that we thought were metal, even though they aren’t music.

The first item is really multiple items, just a few photos that caught my eye. The one above is a picture of Rex, one of the world’s largest crocodiles, as he prepares to chow down on some beef ribs at WILD LIFE Sydney Zoo on October 3, 2012, in Sydney, Australia. Rex weighs more than 1500 pounds and he’s more than 16 feet long, and this was his first meal after three months in hibernation.

I didn’t know that crocodiles hibernated. I don’t know about you, but I wouldn’t want to come within 10 miles of a 1500-pound reptile that hasn’t eaten in three months. Fuck.

Of course, Rex has his own Facebook page. I like the status he posted there on Christmas Eve last year: “Dear Children of the world. I ate Santa last night. Sorry about that.” This sounds like my kind of zoo.

The next photo is Neptune. Not the god, but the planet. I haven’t seen photos of the god that are good enough to share. I don’t know what was done to produce the colors in the photo of the planet, but the pic is really fuckin’ cool. 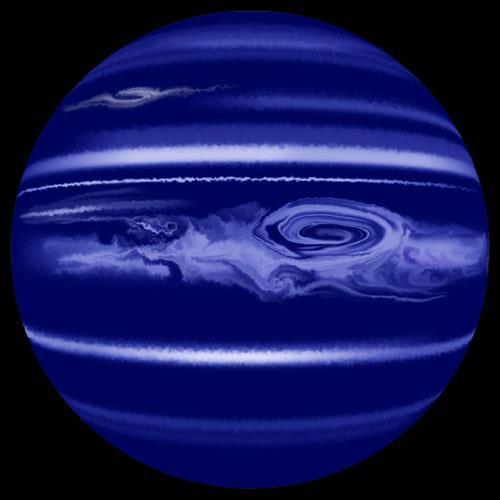 Volcanos are also metal, though more like death/grind or maybe blackened thrash. This next pic was taken during the eruption of the Puyehue volcano in the Andes mountains of southern Chile in June 2011. 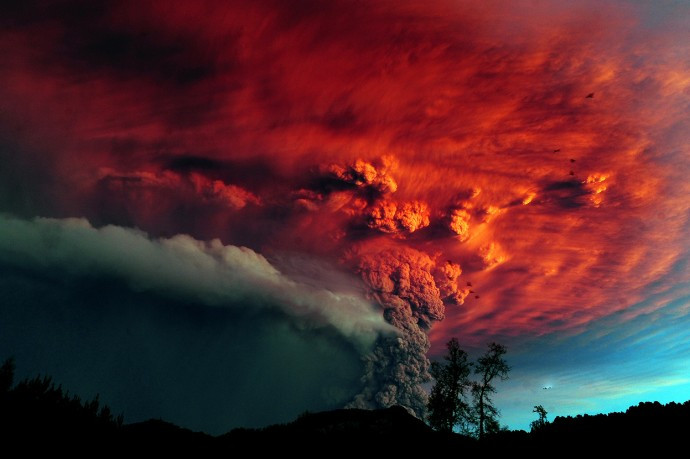 This was the volcano’s first eruption in half a century. It produced a column of gas 10 kilometers (six miles) high, which is almost as high as the gas that came out of the U.S. Presidential debate two nights ago. Of course, the eruption also produced a shitload of great photo opportunities for nature photographers. A whole lot more Puyehue photos of similar power and beauty can be found at this location.

Next, we have this: 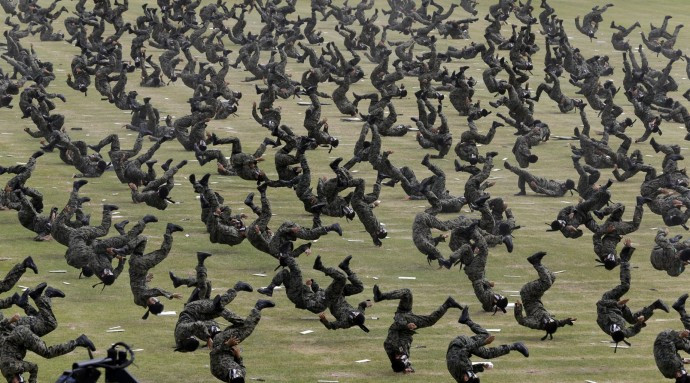 These are South Korean special army soldiers demonstrating their martial arts skills during the 64th anniversary of Armed Forces Day at the Gyeryong military headquarters in Gyeryong, south of Seoul, South Korea, on Wednesday, Sept. 26, 2012. This is an AP Photo taken by Lee Jin-man. I like it because it looks like the Earth dropped out from beneath them, or suddenly started rotating faster, or slower.

The next pic was provided by metal writer and occasional NCS contributor Dane Prokofiev. As he pointed out, this is a real metalhead. His name is Joe Aylward, and he was reportedly the first recipient of a “transdermal implant”, performed by Steve Haworth. 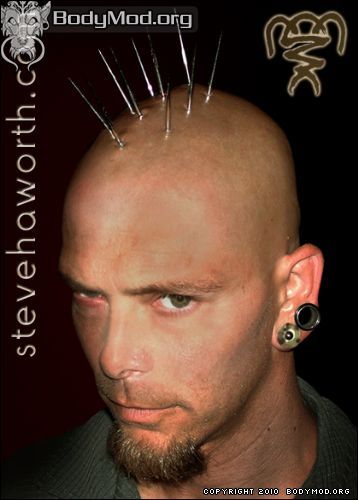 I’ve read that transdermal implants can be very difficult to heal. Many tend to stay in a continual state of “not fully healed” and often have scarred and irritated skin surrounding them. Healing can take up to two years to complete. Rejection can occur even after the transdermal is fully healed if it is accidentally bumped. Joe had his implants removed — after a decade. 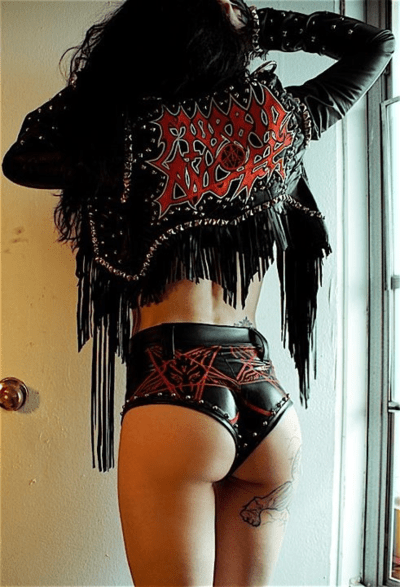 Shit!  How’d that get in here?!?  This is a wholesome, family-oriented site!  Not.

This is also Sharon Ehman: 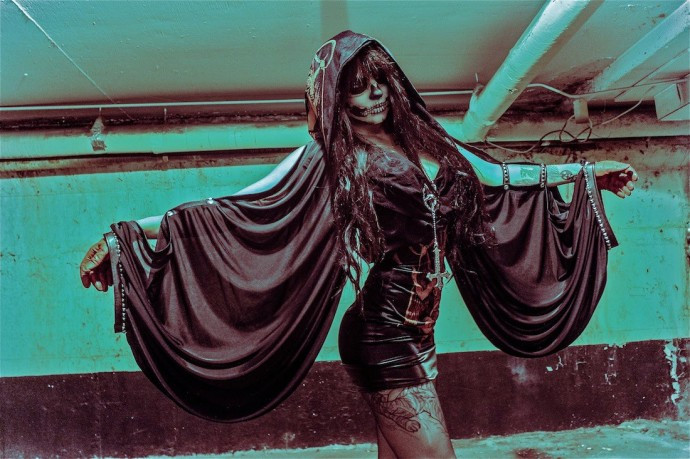 Sharon is a designer and the owner and operator of a Toronto-based clothing label called Toxic Vision. She makes all the clothing from scratch, and all the designs are one of a kind. Aside from producing regular weekly collections, Toxic Vision has also created pieces for Dee Snider, Dave Navarro, Juliette Lewis, Steve Harris, Kat Von D, Poison, Dimmu Borgir, Morbid Angel, and many more. Definitely metal.

One more pic of Sharon in one of her spikier creations before we move on. Looks like she’s wearing two of Joe Aylward’s heads. 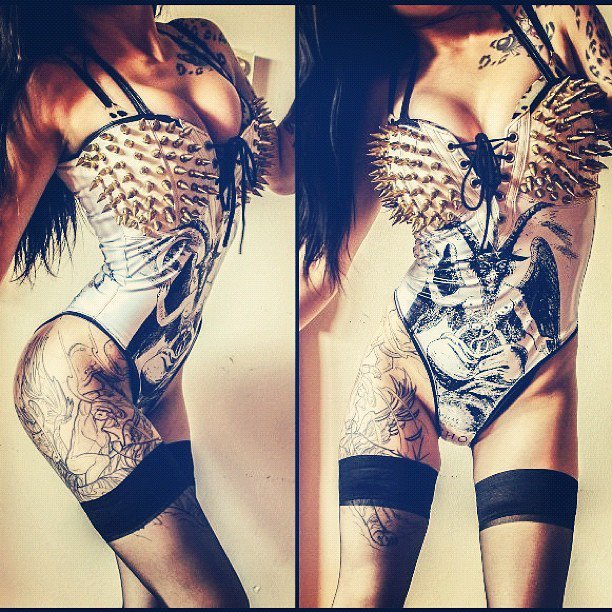 I’m still very excited about the August 6 landing of the Curiosity rover on Mars, and about the images it’s sending back to us Earthlings. Here’s a recent one, which shows rounded pebbles and gravel in ancient stream beds, providing what scientists say is the first proof that surface water once ran on Mars — potentially for thousands or millions of years. 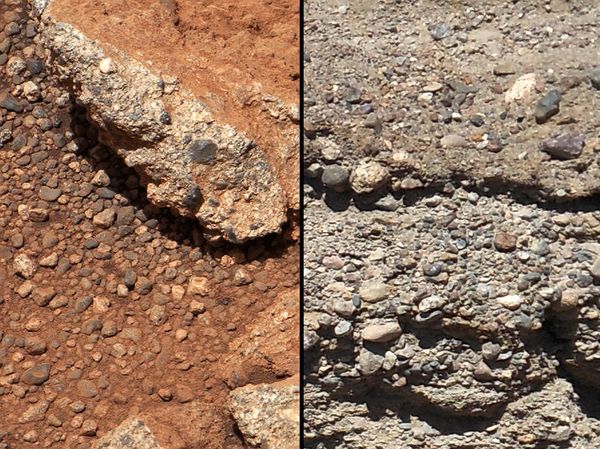 Knowing of my interest in this kind of shit, one of my day-job co-workers sent me a link to the following video. Using a combination of actual film and animation, it shows what was necessary to get an earlier Martian rover to the Red Planet. Its name was Spirit, and it landed on the surface on January 4, 2004. In May 2009, Spirit became stuck in soft soil, and NASA controllers on Earth were unable to get it free. Spirit stopped communicating in March 2010. Let’s hope Curiosity has a better journey.

The video is an edited version of the IMAX movie Roving Mars from 2006. It’s very cool — definitely take it to full-screen.

I’m just as concerned about the coming zombie apocalypse as the next person. In fact, after seeing this next story I’m even more concerned, because zombie bees have appeared in the state of Washington, where I live.

While most bees are tucked up in their hives during the night, zombie bees are out flying and they stagger around erratically before eventually dying. Here’s some video of a zombie bee: 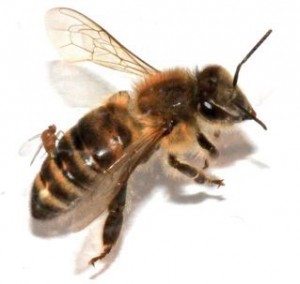 So what causes this kind of aberrant behavior? According to this article in the Seattle Times, a tiny female parasitic fly lands on the back of the bee and injects its eggs into the bee’s abdomen. The eggs hatch into maggots, which then begin to eat the insides out of the bee. They eventually emerge from the bee’s body covered in a hard shell, and eventually an adult fly comes out of the shell.

All of which is yet another reminder that nature is fuckin’ disgusting (as well as beautiful). Human beings have to imagine creatures like aliens and zombies. In nature, it’s a reality.

Although zombies and aliens are metal, this parasitic fly infestation is really a bad thing. Bee populations have already plummeted in recent years, threatening crops that rely on them for pollination. The increasing spread of the parasitic fly is beginning to make a bad situation even worse.

Before we leave Nature, this is a chameleon washing its creepy little hands. I don’t really know what else to say about this.

Have any of you ever driven on the Autobahn? I haven’t. Probably the closest I’ll get to it is watching the following video. As you watch this, remember that this isn’t a race track. It’s a public highway in Germany, and the driver is behind the wheel of a production BMW. I’ll let you see for yourself how fast they get going.

For today’s last item, we turn to the Hang. The Hang is a musical instrument created by Felix Rohner and Sabina Schärer of PANArt Hangbau AG in Bern, Switzerland. Its made from two steel sheets formed into the shape of a UFO with nothing inside but air. Technically, it’s a Helmholtz resonator, and it’s played with the fingers and hands (“Hang” is the Bernese German word for “hand”).

I don’t pretend to understand how the Hang works, but I do think it’s metal. And I don’t mean simply because it’s made out of steel.

Here’s a video of a Hang solo played by David Kuckhermann, who has recorded a CD of solo music for the Hang and another similar type of instrument called the handpan, and I’m including the Bandcamp player for that after the video. For more info on the Hang, go to The Font of All Human Knowledge — and thanks to NCS reader and occasional contributor Mike Yost for turning me on to this.