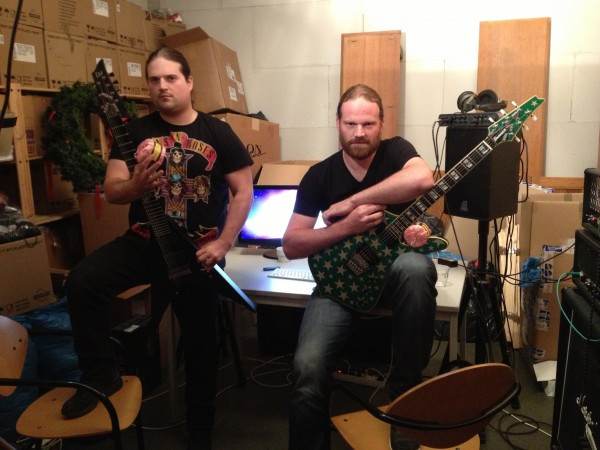 Michiel Dekker and Ivo Hilgenkamp, on the verge of redefining civilization.  Again.

The Monolith Deathcult’s new album TETRAGRAMMATON has been brewing slowly, like a fine Dutch lager, except with more radiation. Their last album, Trivmvirate, erupted from the womb in 2008, and the gestation period for the new release has been so protracted that we expect the new offspring to be a real monster (yeah, I mixed my metaphors, so sue me).

TMDC have periodically been streaming pre-production teasers of the new music, and we’ve been dutifully posting those streams as they’ve emerged, but they haven’t stayed up on the net for long, and it’s never been entirely clear whether the songs would actually find a place on the new album. But the final shape of the music is now being formed.

Yesterday we received word that TMDC entered the studio in September to record TETRAGRAMMATON. The band’s statement deserves to be quoted in full, so masterful is its understated eloquence:

“Since 2008 – when we redefined art, music and human civilisation – we’ve been milking Trivmvirate until it’s cheese,” said bassist/vocalist Robin Kok, “so we decided to make a new album and see if we can milk that even further.”

Song titles set to appear on the new Monolith Deathcult album include “Human Wave Attack”, “Drugs, Thugs & Machetes”, “Todesnacht von Stammheim”, “Quasr Al-Nihaya” and “Aslimu!!!-All Slain Those Who Brought Down Our Highly Respected Symbols To The Lower Status Of The Barren Earth”.

According to the band, the CD’s overall lyrical theme will be roughly the same as on Trivmvirate (2008) and The White Crematorium (2005). “But then again,” said guitarist/vocalist Michiel Dekker, “who cares about lyrical themes in Death Metal?”.

As on Trivmvirate, producing duties and Pro Tools wizardry will be done by Pascal Altena. Mixing duties will be handled by Guido Aalbers.

TETRAGRAMMATON is set to be released in the first half of 2013.

Also, hailing back from an unsurprisingly failed attempt to make ‘proper grown-up music’, synthmeister Carsten Altena has sheepishly returned to the Deathcult flock as a full band member and will contribute much wailing and gnashing of teeth both on TETRAGRAMMATON and live on-stage.”

Now, I generally try to hold the obnoxious side of my personality in check here at NCS, feigning a disposition of humility and grace. However, there are limits to my self-restraint, and therefore I will say that I have been given the privilege of hearing the pre-production tracks.

I’m not at liberty to say much about the album at the moment, so I’ll limit myself to these brief observations: It’s savage. It left me with a severe bangover. It tops Trivmvirate. This will definitely be a 2013 release to anticipate eagerly.

4 Responses to “THE MONOLITH DEATHCULT: AN UPDATE”