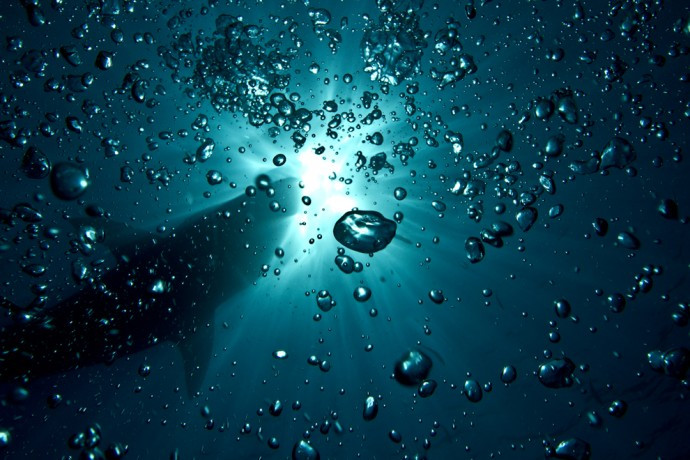 It’s time again for another installment of THAT’S METAL, where we take a brief break from the headbanging to collect, images, news items, and videos that we thought were metal, even though they’re not music.

It’s worth reminding everyone, especially for this installment, that things can be metal for a bunch of divergent reasons — ranging from the blindingly awesome to the brutally destructive to the disgustingly grotesque to the utterly ridiculous. Of course, like beauty, what’s metal is in the eye of the beholder . . . and I’m kinda cross-eyed.

The first item, as usual, is the photo at the top of this post. I saw it at the amazing Big Picture at Boston.com, which is one of the best photo-collecting places on the web. It’s a shot of a Great White shark taken from below, by a photographer who was perched on top of a submersible cage just after he released a breath through his respirator. It’s one of thousands of photos that are currently being submitted in The National Geographic’s 2012 photo competition. More can be viewed here. 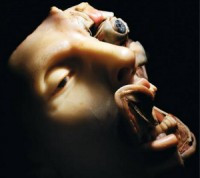 I’m indebted to Ben C from The Church of the Riff for this next item. It’s a collection of photos of intricate wax anatomical models created by anatomists and biological sculptors from the late 1600’s to the mid-1800’s.

The models are creepy as fuck, and many of them seem to be women. In fact, during the 19th century the dissected anatomical statues of reclining women came to be known as “Venuses”. Sexy. 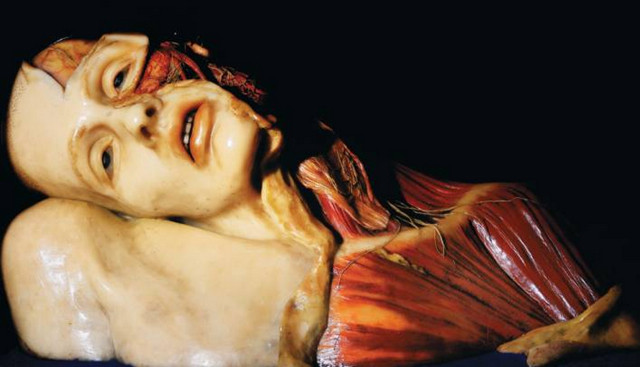 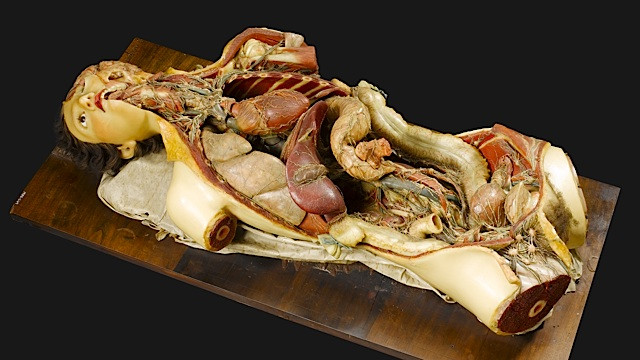 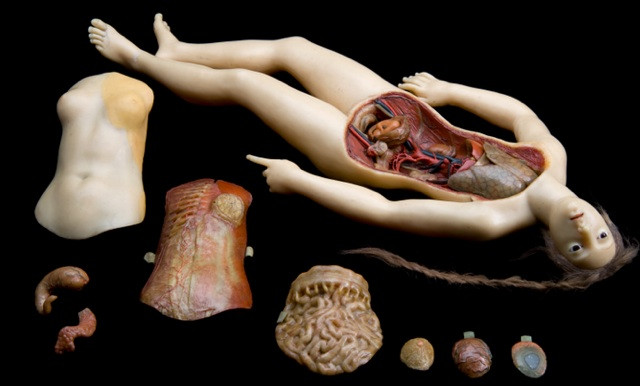 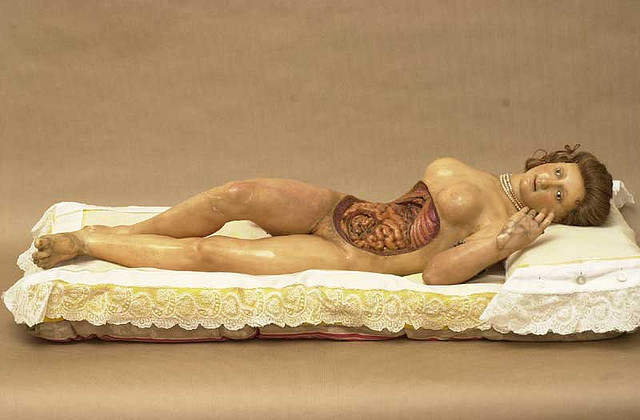 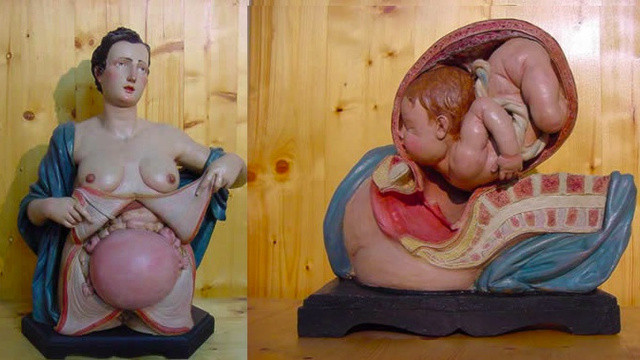 You can learn a whole lot more about this “art form” and see many more photos by clicking on this link.

And now let’s look at a few recent news items. 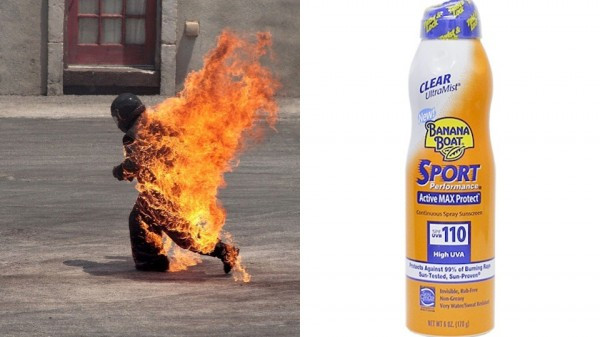 I came across this first news item in The Seattle Times. It’s an AP story with the following eye-catching headline:

The maker of Banana Boat sunscreen is recalling a half-million bottles of spray-on lotion after reports that a handful of people have caught on fire after applying the product and coming in contact with open flames.

Energizer Holdings Inc., based in St. Louis, said Friday that it is pulling 23 varieties of UltraMist sunscreen off store shelves due to the risk of the lotion igniting when exposed to fire.

Huh.  I thought this shit was supposed to prevent you from burning.  Wonder what the problem is?

The problem appears to be caused by UltraMist’s spray valve, which is over applying the product, Energizer said in a statement. As a result the lotion is taking longer to dry, which raises the flammability risk.

“If a consumer comes into contact with a flame or spark prior to complete drying of the product on the skin, there is a potential for the product to ignite,” the company said.

Dr. Darrel Rigel, professor of dermatology at New York University, pointed out that the flammable ingredients in aerosol, including alcohol, are common to many products, such as hairspray and spray-on deodorants.

Okay.  But who would use sunscreen while in proximity to flames or sparks?

Dan Dillard, executive director of the Burn Prevention Network, said the group was contacted earlier this year about two burns related to spray-on sunscreen. One case involved a man who was standing near a barbecue grill, and the other involved a woman working with welding equipment. Both cases resulted in second- and third-degree burns.

Oh, riiiight.  Barbecuing. Working outside near equipment that generates sparks or flames. Setting off fireworks on the Fourth of July. Having a cig right after you’ve sprayed the goop. Just goes to show that when it comes to sunscreen, you can’t always rely on a high SPF. 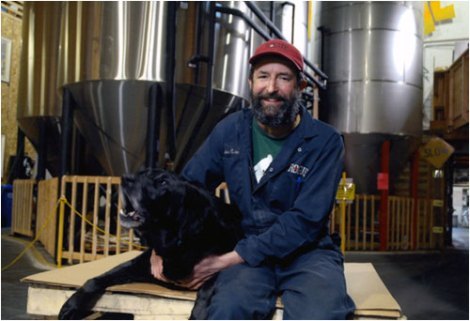 That friendly looking beardo up there is John Maier, a brewmaster at Oregon brewery Rogue Ales. According to this story, John hasn’t shaved since 1978 — and he’s using yeast harvested from his beard to make ale. No shit.

John took nine hairs from his beard and sent them to a lab in California for testing. There, researchers cultured the yeast to see if it would actively ferment and reported that the beard yeast “surprisingly performed like a hybrid between the brewery’s ‘house’ yeast strain, called Pacman yeast—which is used to make most Rogue Ales—and a wild yeast.”

Rogue Ales plans to release its beard brew next spring, dubbed “New Crustacean”. “We want to let the yeast be the star of the show,” Maier said.

On the one hand, making ale from organisms growing in a dude’s beard seems pretty metal. On the other hand, despite the fact that most fermenting species of yeast are found on animals, insects, and rotting fruit, I think I’d rather go on the wagon than drink “New Crustacean”.

(Credit to NCS reader GemmaD, who has her own cool blog here, for the tip on this beardo brew.) 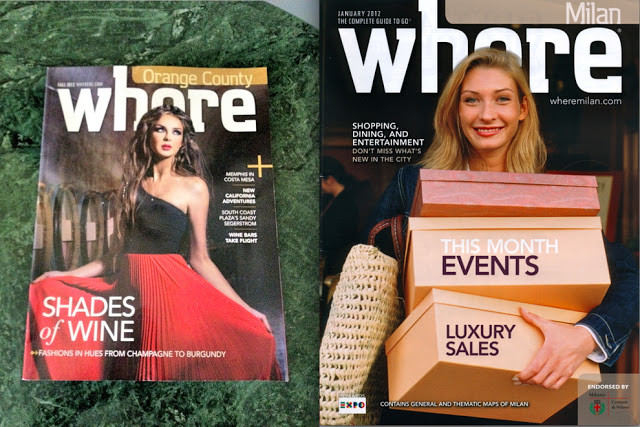 Yep, these magazine covers could have used a bit more thought in the layout design.

The magazine’s name is Where. 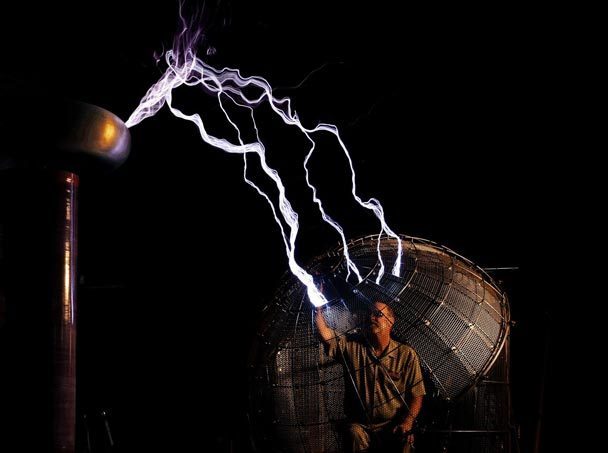 I found this item in The Seattle Times, too. It concerns a device called the MegaZapper at the Spark Museum of Electrical Invention in Bellingham, Washington, up near the Canadian border. For the price of $5, the museum will “let” you sit inside a 9-foot-tall metal cage and then zap it with 4 million volts of electricity for about 20 seconds. Seems legit.

My first reaction was to think that the museum should pay the patrons for this, but that shows how much I know.

Of course, it’s all completely safe — until the first person is turned into a smoking black pillar of charred meat. No, seriously, that thing you sit in is a Faraday cage, which conducts the electricity around the outside of the metal enclosure so they never come in contact with the occupant. The sparks come from a Tesla coil, also rising 9 feet in the air.

The museum itself is pretty fuckin’ metal. It’s billed as the world’s largest private collection of mankind’s electrical history. It was founded by one of those ex-Microsoft zillionaires named John Jenkins, who was the son of an electrician.

He has assembled in the museum all sorts of electrical artifacts, including an electric pen invented by Thomas Edison in 1876, one of the four telephones used in the first transcontinental telephone call in America on Jan. 25, 1915, one of the first dial telephones, invented in 1891 by a Kansas City undertaker, and the 1934 Thermalaid Prostate Warmer — along with 2,000 radios, 30,000 early phonograph records, and 30,000 vacuum tubes.

Here’s a video of the MegaZapper in operation:

To wrap up this installment of THAT’S METAL!, here’s one more video.

I think I’ll just let this one speak for itself.  (via The Presurfer)