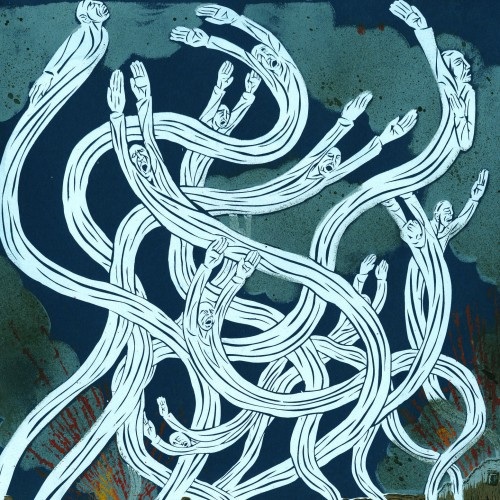 This review didn’t begin as a review. I only intended to sample a couple of tracks from this album as part of a MISCELLANY excursion that I posted earlier today. But in part because the album was the last stop on that tour, and in part because I got sucked in by the music, I listened to all of it . . . and so here we are.

Nick Millevoi contacted me not long ago through a recommendation from my friend Alex (Grind To Death) Layzell, with whom NCS collaborated on the grind / powerviolence compilation The Only Good Tory (which you should go grab HERE for free if you haven’t already). Nick is is a Philadelphia-based guitarist whose third album In White Sky was released on October 23 by Flenser Records, which is on my short list of labels who release nothing but interesting music.

Since this music came my way via Alex Layzell, I assumed it was going to be something like the sound of napalm being sprayed from a high-pressure fire hose. But it’s not what I was expecting.

I started with the first two songs on In White Sky, planning to stop there per the MISCELLANY rules, and became immediately enthralled (and immediately disoriented) by both of them. I really wanted to see where the music would go next after those first two tracks, and so I let the sounds continue to run. 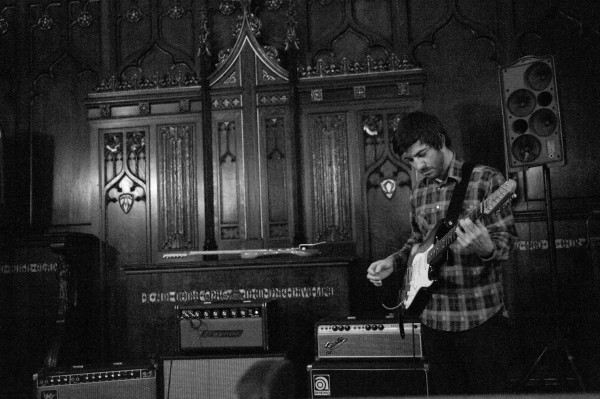 The tracks are instrumental-only and consist of nothing but Nick Millevoi and his 6- and 12-string electric guitars. I’d like to give you a quick roadmap to the music by way of introduction, but I can’t put my finger on any other bands I know of whose music I could use as reference points.

The highly experimental music is loud, distorted, dissonant, often droning, often drowning in waves of feedback. It’s occasionally pierced by bounding, ratcheting chords that will get your head moving (“Before A Constant”), or pulsating tones, or horrific alien noises that sound like mindless off-planet carnivores tearing at fresh carcasses (“Slowly Dark”).

The aura is frequently bleak and disturbing, with unusual tunings and electronic effects creating atmospheres of dread or slow destruction. Sometimes, isolated notes climb and descend on uncomfortable alien scales (“Super-lith Part 1”). Sometimes harrowing screams erupt from tortured strings with brain-melting intensity (“Super-lith Part 2”). There are no human voices on this album, but something is singing, something you really hope you never meet in the flesh.

The album’s crowning achievement is the long final track, “Endless Unfolding Hallways” (clocking in at 14:35). It moves from distorted single chords reverberating in a barren soundscape through an increasingly intense cascade of chiming/swirling melody, ultimately landing in a dead zone buried in highly radioactive fallout, with an army of Geiger counters freaking out over what they’re detecting. At the song’s end, everything begins to die away in a droning reprise of the song’s beginning before a final spurt of intensity closes the album, leaving the listener disturbed and unbalanced.

The music is so dissonant and so devoid of rhythm that I’m not sure how many regular readers at this site are going to get into what Nick Millevois does. It’s certainly quite unlike what we usually cover — and to put that statement in context, the range of what we cover is pretty wide. But for me the album exerted a kind of deranged magnetic attraction that I wasn’t able to resist. The polarities are scrambled, and so are my synapses.

In White Sky was recorded by Eric Carbonara and mastered by Colin Marston (Krallice, Dysrhythmia). It’s a free download on Bandcamp and can also be ordered on cassette from Nick via his blog or through The Flenser. Links to all are below — followed by the music, and one video (ingeniously directed by Dylan Pecora) for the album’s most disturbing track.