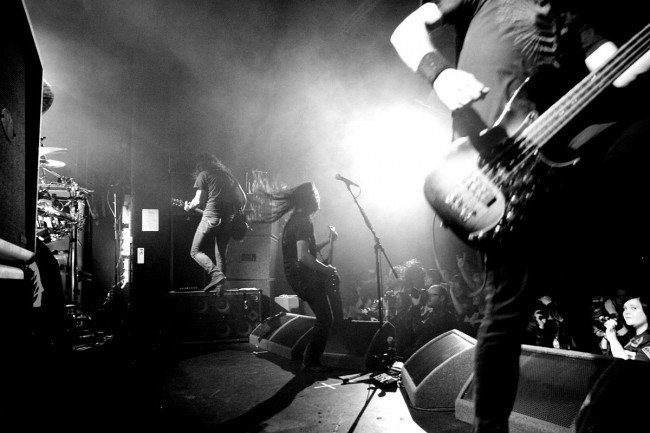 Those French titans of metal in Gojira are coming back to North America early next year to tour with The Devin Townsend Project and The Atlas Moth. I bought advance VIP tickets for the January 20 show at Seattle’s Studio Seven as fast as I could. One of the perks of doing that was the promise that I would get a download of two live recordings now and another one closer to the start of the North American tour.

Yesterday the download link arrived in my in-box. The two songs included in the download were “Love” and “Toxic Garbage Island”. They were recorded during Gojira’s performance at at the Studio at Webster Hall in New York City on August 14, 2012. They’re crushing, and too good to keep to myself. So, after the jump I’m going to stream both of them for you.

Also after the jump, in case you missed it, is a video of the band performing “Explosia” from the new album L’Enfant Sauvage at the same Webster Hall show.  To get the North American tour schedule, check out this previous post about the tour.

UPDATE: At the request of Gojira’s label, we’ve discontinued the streams of those two live Gojira tracks — an exclusive premiere was promised to another site. As soon as the songs have premiered we’ll include a link to where they will be streaming. Sorry! But do check out the “Explosia” video below.