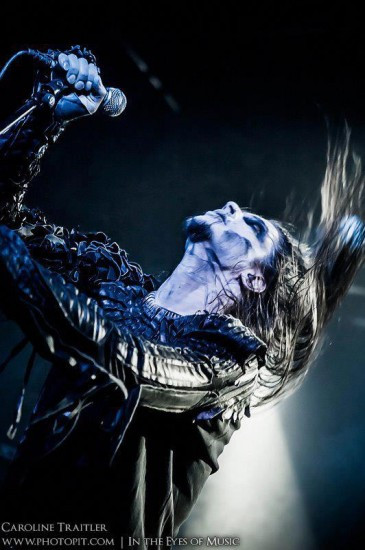 (Andy Synn was both performer and spectator at the November 16 show in Derby, England, headlined by Dark Fortress and he provides both this concert review and video clips of each band’s performance.)

So the boys in Bloodguard and I were lucky enough to score an opening slot for one of my all-time favourite black metal bands, Germany’s own Dark Fortress. Needless to say we rocked the place mightily, but I also thought I’d take the opportunity to review the show, and get some video footage of each band for you all.  I am a river to my people.

Up first were Liverpool-based black metal monsters Ethereal. Performing as a four piece, due to a last minute problem with their line-up, the group shot through an all too brief, but absolutely blistering set of raucous, blood-curdling black metal. Blasting through an array of material drawn from their two EPs, Hell’s Divine Existence and Revelation Beast, the group hit hard with a sound that was neither overly primitive nor excessively polished, but utterly raw and ravenous in equal measure.

Formerly known as Traces, the five-piece symphonic extreme metal act Saturnian certainly brought more than their fair share of black metal misanthropy, but added a plethora of grandiose, symphonic keys, sweeping orchestral interludes, and moments of aberrant, death metal groove, to produce a sound which positively revelled in excess and self-indulgence. Shockingly tight, the group kicked into gear with ‘Into Etherea’ off their album Dimensions and from then on barely let up, swamping the listeners in a shameless display of  power and pomposity, all trumpeting keys and face-melting riff work. The group’s triumphant set left the audience with the palpable sense that they’ll soon outgrow venues of this size, if they haven’t already. Their ambitious sound certainly has.

On the other hand Dark Fortress have reached another level entirely, one where they are able to make even the smallest venue seem like both the grandest cathedral and the most menacing abyss, the sort of level where the venue barely matters – it’s the band who make the night what it is. Throughout their set the group showed exactly why they’re head and shoulders above other black metal acts, due to the unholy combination of their stunning musical talents and razor-sharp songwriting.

Seraph is undoubtedly one of the best drummers I have ever seen live, and certainly one of the most creative drummers operating within, yet stretching beyond, the conventions of black metal today. Similarly, band mastermind V. Santura (also of Triptykon) is a jaw-droppingly talented guitarist, locking into an infernal rhythmic embrace with his cohort Avargyr to deliver the band’s skin-flaying blackened riffage and corded, strangling tremolo lines. To top it all off, frontman Morean has a massive, multifaceted voice as his instrument, delivering his quantum lyrical blasphemies with a twisted sneer and a dark flair for the dramatic.

Though the set was built around material from their two most recent, and flawless, albums, the band didn’t ignore their earlier material, the haunting horror of ‘Ghastly Indoctrination’ and gut-wrenching ferocity of ‘Self Mutilation’ standing defiantly beside more recent tracks like the juggernaut rendition of ‘Cohorror’ and a propulsive, sexually charged run-through of the misanthropic anthem ‘Osiris’.

The show ended, all too soon for many, with a grinding performance of the hateful, hook-filled heretical hymn ‘Baphomet’, conjuring one last blasphemous ritual to end the night on a note of pitch-black perfection.