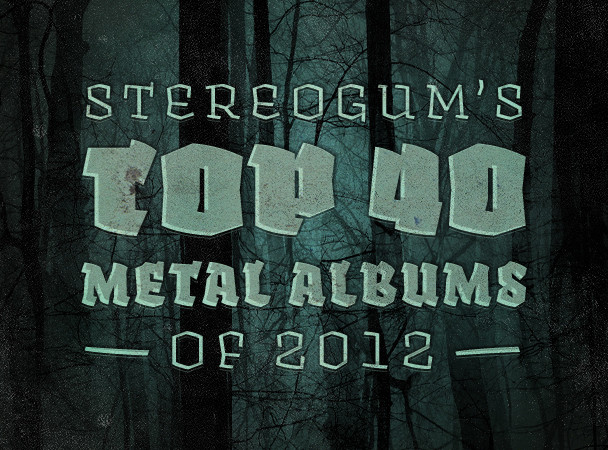 As you undoubtedly know by now, part of our year-end Listmania series consists of re-publishing lists of the year’s best metal that appear on what I’ve been calling “big platform” web sites. We didn’t include a year-end list from Stereogum in previous years, but I think it’s worth doing now.

Stereogum was one of the web’s first blogs to offer mp3 downloads, and it has evolved into a high-traffic portal with a focus on independent and alternative music news, downloads, videos, and gossip. Today Stereogum published its list of The Top 40 Metal Albums of 2012. I paid attention to the list, as I have for other “big platform” sites, because I’m curious to see what metal albums are being recommended by sites whose audiences probably consume a lot more non-metal than metal. But I also paid attention to the list because some writers with taste were involved in compiling it:

The extended introduction to the list was written by Stereogum’s news editor Michael Nelson, and the list itself list was compiled by Nelson plus Stereogum contributors Aaron Lariviere, Wyatt Marshall, and Doug Moore, all of whom also write for Invisible Oranges.

Interestingly, unlike other “big platform” lists we’ve published so far this year, the Stereogum list consciously excluded some albums that other cross-genre sites have included, in part because of doubts about whether the albums are really metal — and I’m talking about the 2012 releases by Baroness, Swans, Torche, and Converge. As you might predict from these exclusions, the albums on the list are also more consistently extreme than what we’ve seen from other big sites.

I think this is a really good list, probably my favorite of the “big platform” lists we’ve published so far, given my own tastes. It certainly includes a lot more black metal and a lot more straight-up death metal and death/doom, and it also includes EPs and splits (which is why we get to see places for the excellent 2012 offerings from Deathspell Omega and Vattnet Viskar).

I also found it interesting that Dawnbringer’s new album again finishes very high (I guess I really do have to listen to it!) and that Pallbearer made the No. 1 slot, and it was fun to see Samothrace and Winterfylleth in the top 5.

Here’s the list.  As always, your comments are encouraged. I’d also encourage you to go to the Stereogum site, where you’ll find Michael Nelson’s interesting introduction plus links for songs from all 40 of the albums.

26.  Secrets of the Moon: Seven Bells

24.  Circle of Ouroboros: The Lost Entrance of the Just

13.  Indesinence: Vessels of Light and Decay

04.  Winterfylleth: The Threnody of Triumph

02.  Dawnbringer: Into the Lair of the Sun God