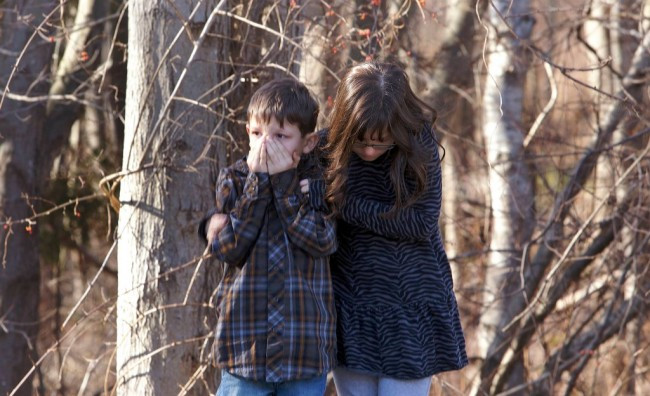 I wanted to write about metal today, as always, but I failed. My mind was still trying to wrap itself around something else, namely, 20 innocent children and six innocent adults gunned down at an elementary school in Newtown, Connecticut, USA, on December 15, 2012.

I don’t know about you, but I’m old enough that I feel pretty hardened against the horrors of the world. Tragedies, big and small, are part of daily life. The world is more interconnected than ever before, and we can read about and watch bloodbaths like this one every day if we want to — because somewhere in the world, each day brings a fresh horror of some kind.

There’s only so much individual human tolerance for bad news. If you don’t armor yourself to some degree against the pain of other people, it’s damned hard to put one foot in front of another and keep going.

I know that, somewhere, children die in droves every day, usually in places where disease or starvation or grotesque neglect claim them. But like all horrors, the closer to home they are, the more you feel them. It’s just easier to imagine that they could happen to you, or your children, or your friends, or their children. Evolution is probably to blame for both our increased sensitivity to tragedies that we can more easily imagine as happening to ourselves or those we love, and our comparative indifference to more remote instances of catastrophic loss. 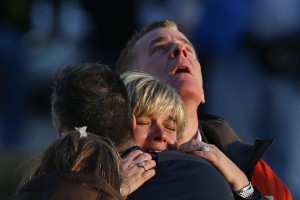 When I was driving home last night I listened to a psychologist being interviewed on the radio. He was giving advice to parents about how to talk to their children in the wake of the slaughter in Newtown. He recommended shielding children from the details of what happened, to help prevent the anxiety and emotional trauma that could come from the feelings of danger, risk, and helplessness that this event could produce.

He also insisted that adults should realize that school-place tragedies of the kind that happened in Newtown are extremely rare. He quoted statistics from the Center for Disease Control that in the last decade there have been a total of 117 violent deaths in U.S. schools — not counting yesterday’s deaths — and that the odds of something like this happening are on the order of 1 in 10,000,000.

My reaction is very different. I think adults should open themselves fully to the brutal agony of this senseless devastation. I hope Americans will feel this intensely and not sweep it under the rug. I hope they will be afraid that, however remote, the odds of this kind of calamity happening in their own backyard are real and should not to be ignored. To my way of thinking, becoming desensitized to the horror will increase the odds of it happening again.

If my wish came true, I’m not sure where it would lead, or if it would lead to any change that would actually reduce the risk of this tragedy being repeated; we live in an inexplicably violent and gun-crazy culture.  But no good of any kind will come from the Newtown catastrophe if we’re all back to “business as usual” by January, or worse yet, by Monday.

This hurts, and it ought to hurt. Those of us with children can do our best to reassure them and to preserve a happy childhood for them to the greatest extent possible. But if we don’t feel this loss to our core, if we avoid thinking about it and talking about it, if we just accept this kind of random violence as part of the fabric of American life, as the price we pay for “freedom”, then shame on all of us.

And people who try to excuse what happened in Newtown or spout ideologies that simply reinforce the status quo in this country in the face of this butchery, those people aren’t feeling this nearly hard enough.

I know you don’t come here to read stuff like this, and rest assured, we’ll get back to metal tomorrow, or maybe even later today. Just had to get this shit off my chest. Feel free to tell me I’m a dick.

48 Responses to “THE DAY AFTER”