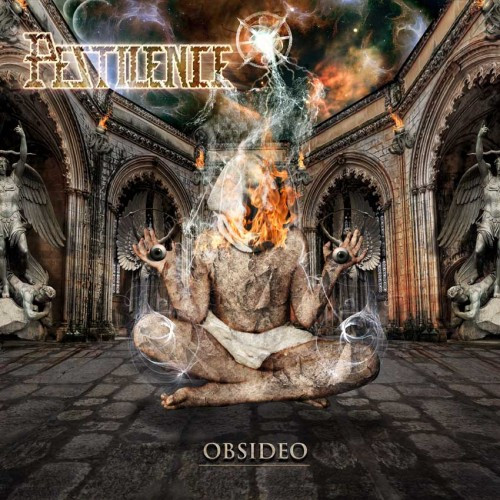 I can say two things about Pestilence with utter conviction. First, your education as a trve fan of extreme music is incomplete unless you have heard Consuming Impulse (1989) — or really, any one of their first three albums. And second, their most recent album Doctrine (2011) was extremely divisive. Many critics and fans slammed it hard, while others (including yours truly) enjoyed it, notwithstanding (and indeed partly because of) the forays into groove, the renewed adventuring in jazz fusion, and Patrick Mameli’s vocal acrobatics, which were more often elevated into a higher range than on previous releases.

In the wake of Doctrine, bass player extraordinaire Jeroen Paul Thesseling and drummer Yuma van Eekelen left the band to concentrate on other projects, and it was unclear what would happen to Pestilence next. We now have a much better idea. Shortly before Christmas, and without much fanfare, the album art you see above surfaced on Facebook. It’s for a new Pestilence album named Obsideo. It was created by Santiago Jaramillo of Triple Seis Design and it’s damned cool.

In addition, as previously announced by the band, the new album will feature Stephan Fimmer (Necrophagist) on bass and David Haley (Psycroptic) on drums, and the plan is for both of them to play with Pestilence at live shows as well as in the studio.

I don’t have a release date yet — in fact, I don’t think recording has begun, although the writing of the songs has been completed. However, I do have some comments by Patrick Mameli about the new album.

The comments recently appeared on his Facebook page, responding to fan comments and questions about Obsideo. As for the music, Mameli wrote that Obsideo will be “the most brutal and verocious” Pestilence album yet. He also stated that some jazz elements will again be present, though it sounds like they will be much more limited than on Doctrine, with brutality being the dominant goal of the music.

And as for the vocals, he wrote: “This will be, again, a different vocal style. More of a mix of all albums. Way lower than doctrine though!!! And more brutal!!!!”

One might surmise from these comments that Pestilence is returning to its roots, yet Mameli also told fans not to expect a rehash of something like Testimony of the Ancients. As he put it, “i wouldnt count on it. This is 2012/2013.”

I have a sneaking suspicion from these comments, and in light of the extremely mixed reaction to Doctrine, that Obsideo will reflect a return to death-metal form for Pestilence. Yet with the addition of Fimmer and Haley, I also expect it’s going to be a technical whirlwind. And finally, because Patrick Mameli and guitarist Patrick Uterwijk are mature, seasoned artists, I also expect that there will be surprises in store.

But we will see. Obsideo goes on my highly anticipated list for 2013, if only because I’m now very curious about what this talented foursome is going to deliver.