Now this… this is a special little something.

While superficially it might seem that the album is simply a continuation of the (pretty phenomenal) direction established by the previous two albums, it’s actually far more than that. Beneath the sheen of stainless melodic steel and furious Finnish thunder lies an electric current of progressive dynamism, all fused together into one state-of-the art musical package.

Looking at the previous two albums, if The Redshift was where the band discovered and started to stretch their new-found musical muscles, surprising even themselves with their growing potential, then New World Shadows was where the band put those muscles to a real test… and STILL found themselves surprised by what they were capable of. Which makes Beyond the moment where they realised that maybe there’s nothing they can’t do… 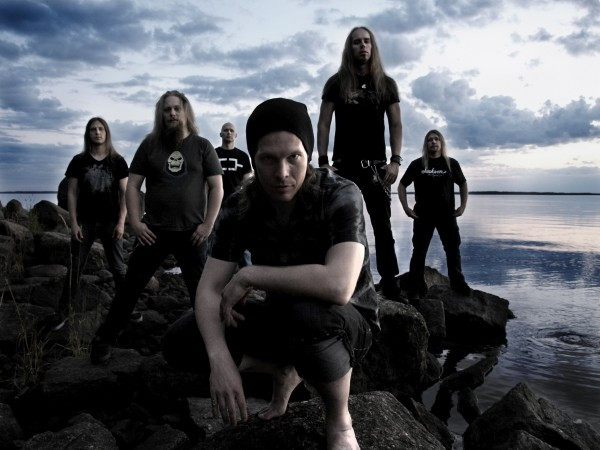 The album absolutely gleams with confidence and conviction, everything about it sharpened and polished to near-perfection. From the moment that the stately intro “Luoto” blooms into a kaleidoscope of rapturous colour and blazing light, right until the final bars of “White Palace” recede once more into the ocean of sound, the album absolutely flies by, never resting, and never compromising its vision.

This single-mindedness and singularity of identity doesn’t come at the cost of the band’s more progressive inclinations however. Opener “The New Dynamic” sets the tone for the rest of the album, its molten metal core and clever layers of ethereal keys slowly morphing into a grandiose swell of superior sound, all majestic arrangements of clean, choral vocals and skyscraping guitar melodies.

“In The Rim” develops from this, but with a darker overall ambience. Crunchy, staccato stabs of riffage provide the necessary power, while the brutally emotive guttural vocals provide impressive depth, and the overall transformative structure of the track speaks to the band’s progressive intentions, shifting gradually towards a slower, more atmospheric approach as the song progresses.

“Nightwalkers” expands the size of the band’s ambitions, spreading to over 8 minutes of slow-burn riffage, reverberant harmonies, and sinuous, elastic bass-lines. The song’s broody, artfully melodic chorus refrain shifts and transforms with every repetition, while the bleak, shadowy mid-sections bring a heavy atmosphere to the proceedings, before ultimately turning in upon itself in a Gordian knot of winding guitar lines and punchy, pulsating kick patterns.

At first glance the whole album is, in many ways, divided between the shorter, sharper tracks of pure melodeath sound and fury (“Formidable”), the more emotively expressive tracks of melodic melancholy (“Who Could Say”) and lengthier, more progressively inclined numbers (“The Unknowing”) that blossom into waves of glimmering solar fire. 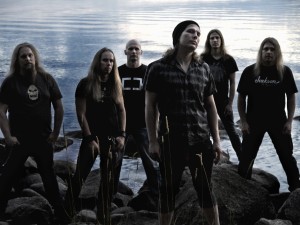 However, this divide is not as strict as it might seem – the aforementioned “Formidable” has a clever give-and-take dynamic between softer melodies and steely heaviness, tied together by a subtle, proggy undercurrent, “Who Could Say” tops off its dreamy vibes and heartfelt vocals with a heavy dose of primal drumming thunder, while “The Unknowing” bounces back and forth between an aura of glistening melodic complexity and a thickly woven tapestry of spiralling riff-work.

Whereas melodeath can, in the wrong hands, occasionally become a sluggish, repetitive affair, all sluggish, saccharine melodies and a weak, watery backbone of vaguely metallic cliches, Omnium Gatherum take the formula and give it a shot of pure adrenaline, untainted by cynicism and self-doubt. Even in the slower moments the album maintains the unbreakable momentum of a ticking clock, always looking forwards, always moving towards the next horizon.

Concocting a gleaming, melodic monolith of progressive vibes and perfectly-harnessed aggression is a hard task for any band, but this Finnish sextet have also proven themselves expert fishermen as well, adorning every song with a plethora of razor-sharp hooks. Heavy, hard-hitting, and utterly unforgettable, “The Sonic Sign”, is full to the bursting point with fuel-injected riffage, bouncing, rattling drumming, and an utterly undeniable chorus, while the penetrating clarity of “Living In Me” is a whirlwind of driving riffs and sharply focussed vocals, wrapped in a cloak of dancing keys and lead guitar fireworks.

Though the band indulge their own designs and desires with impunity, without pandering to any trends or expectations, they never over-indulge themselves, never losing their place or direction. It all comes to fruition in the 10-minute display of mesmerising, intelligent song-writing and brooding, hypnotic power that is “White Palace”, a song of such sublime texture and awesome power that it acts as a perfect summation of the band’s majestic, metallic methods.

The album is a testament to a band not ashamed to be themselves, with nothing to prove to anyone except themselves alone. Though melody is the keystone to their identity, they’re certainly no less heavy or respectable for it – the album’s fairly massive drum sound certainly helps in that regard – with every release making huge strides in how they construct, and utilise, their seemingly never-ending array of killer melodies and vibrant, distinctive riffs. Each dynamic, diamond guitar lead, each sparing, sombre clean vocal, each artful incorporation of cosmic ambience, all contribute to the album’s gorgeous distillation of harmony and distortion.

Beyond is a fitting title for this album, as it finds the band acknowledging the potential limits of their sound… and then simply choosing to ignore them, pushing further, going above, and beyond, what has come before.

Beyond will be released by Lifeforce Records in Finland, Germany, Austria, and Sweden, and digitally, on February 22; in the rest of Europe on February 25; and in North America on March 5. Special pre-sale bundles are now up for pre-order at the Omnium Gatherum webshop, and the album can also be pre-ordered from LevykauppaX / RecordstoreX.

The album art is by by Olli Lappalainen. The album was mixed and mastered by Dan Swanö at Unisound Studio.

Connect with Omnium Gatherum on their Facebook page or their official site.

Unfortunately, no music from Beyond has yet been made available for public listening — but you can be sure that as soon as it is, we’ll have it for you here.

9 Responses to “OMNIUM GATHERUM: “BEYOND””