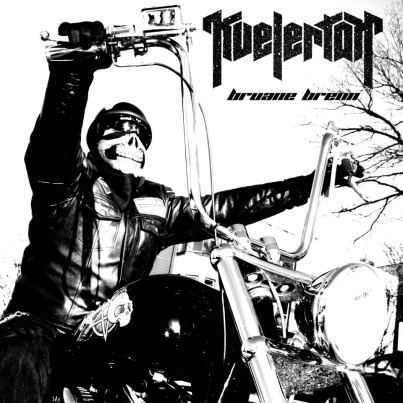 Norway’s Kvelertak have a new album (Meir) coming in 2013 via Sony Music. Last fall they performed one of the new songs, “Bruane Brenn”, for the first time at a live show in Oslo. This past weekend it appeared on Spotify and as of yesterday it’s also now available as a download via iTunes in Scandinavia, accompanied by Seldon Hunt artwork, though it won’t become available on other iTunes sites worldwide until January 28.

You may once again scratch your heads over the logic of record labels in making staggered releases of music in the modern digital age. Something appears in Country X, and in no time at all it appears on YouTube everywhere else. And then we often see the game of YouTube Whack-A-Mole in which the labels demand that YouTube take down the leaks, only to see them surface again.

And so, “Bruane Brenn” is now on YouTube, and after the jump we’ll have that song clip for however long the particular link we found may exist, along with video of that live performance in Oslo (which is pretty fuckin’ cool in its own right).

Oh my, is this a catchy motherfucker of a flailing, upbeat punk rock romp, with juicy guitar chords, a hook-y chorus, a blend of scarred and clean vox, and a sweet, slowed-down guitar solo. This is more a road-burning, sing-along rocker than anything infected by the black metal virus that seeped into songs from the band’s debut album. Very nice way to start this Tuesday.