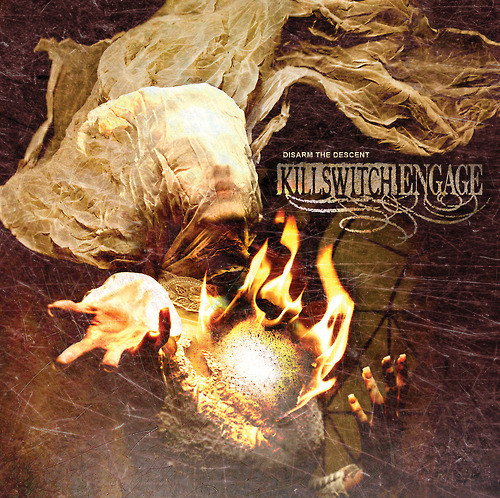 I got into metal relatively late in my life. Not long after I started, metalcore began to emerge, and then melodic metalcore took off like a rocket, with me hitching a ride on the sound. Killswitch Engage were one of the bands firing the boosters, and their early albums became personal favorites. Time passed and the rocket’s ascent stalled, reaching no further heights and merely circling in a stable and eventually degrading orbit. My own interest waned considerably and I jumped off the ride, moving on to other (more extreme) things.

But, perhaps more from a feeling of nostalgia than anything else, I’ve been interested in hearing what the revamped Killswitch Engage have done with their new album Disarm the Descent, their first release since original vocalist Jesse Leach rejoined the line-up last year. The album is due for release by Roadrunner on April 2, 2013, with the first single — “In Due Time” — scheduled for release on February 5.

Yesterday that single debuted on Kerrang Radio (here), and it didn’t take long for a radio rip to appear on YouTube [UPDATE: KSE have now posted an official stream of the song in better quality sound]. There is nothing groundbreaking about the song. It follows the well-defined blueprint of the metalcore genre. Yet there is mediocre and bad metalcore and there is good metalcore, and this sounds pretty damned good to me (though I suspect the tug of nostalgia is having something to do with my reaction).

The song is catchy as fuck, an effective combination of kick-your-teeth-in riffs, punchy rhythms, and hooky melody. I enjoyed the guitar solo, too. And Jesse Leach sounds great — really fuckin’ pissed off in the hardcore harsh parts and clear as a bell in the clean parts. The music manages to convey a sense of genuine energy and passion, even if it is following a very well-defined formula.

Speaking only for myself, of course, I have no doubt this album will not suddenly rekindle a new appreciation and love for metalcore. Those days are gone forever. Yet this may still be an album worth having, for those rare moments when I’m in the mood for a trip down memory lane.

Here’s the official stream of “In Due Time”: