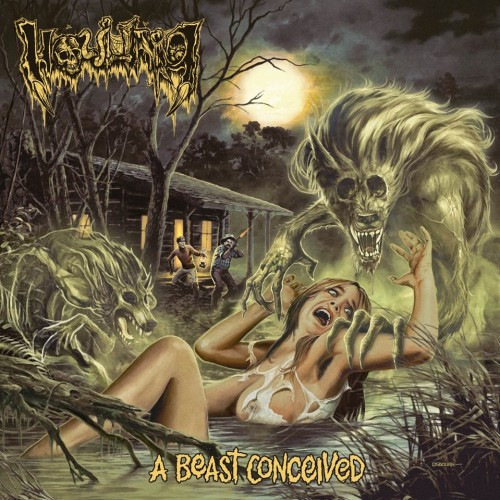 I hear someone’s voice, sometimes I get a vivid mental picture of what they look like. I hear Vanessa Nocera’s vocals on the debut album by Howling, I see her clearly:  two stories tall, covered in dense black fur matted with blood, teeth made for tearing and chewing, claws made for gutting, blood-red eyes like windows into Hell.

I could be wrong. She might only be one story tall. But I’m pretty confident about the rest of it, at least when there’s a full moon.

Of course, there’s more to A Beast Conceived than Ms. Nocera’s inhuman vocals. She’s joined in Howling by Tony Proffer (Beyond Hell) on guitar and bass, and by drummer Elektrokutioner (Scaremaker, Wooden Stake, Beyond Hell, Encoffination, Father Befouled, etc.). Together, this trio are about as locked in to a shared vision of their music as you could possibly ask for. Together, they kick up a mad, thrashing, garage-band racket that pulls from more diverse genres than you might guess from what I’ve written so far — and what they’ve cooked up is fuckin’ brilliant.

Vanessa Nocera’s vocals require that the prefix “death” be added to any attempt at a genre description for A Beast Conceived. The word “horror” could be added because of the lyrical themes (not to mention the album art). But despite these markers, the music isn’t down-tuned, distortion-pedaled old-school death metal, or corpse-ridden death/doom, or goregrind, or even crusty d-beat. What it is, is something quite refreshing and insanely addictive.

A Beast Conceived is a raw, feral, reckless mash-up that includes elements of old-school thrash, blues rock, Maiden-esque heavy metal, and even occasional hints of stoner doom — with all of it given an unholy and unearthly death metal marinade thanks to the vocals. 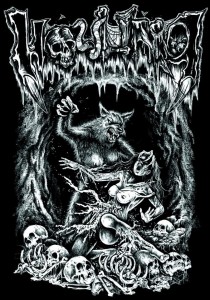 You’ll notice the production quality immediately, and it’s one of the album’s great strengths. It gives the music a very natural sound, as if it were recorded straight to analog tape in one live play-through in someone’s garage. In an era when so much extreme music is coated in a carefully processed (and often highly compressed) sheen, this album sounds like a recently unearthed bootleg recording of a live show by a kvlt band on the verge of blowing up.

The percussion is a notable example of what I’m talking about. The tone is completely natural, with an un-triggered rumbling sound that’s not pushed forward in the mix. There’s not much blasting or double-bass, but Elektrokutioner always seems to know exactly what will best suit each part of each song. The high-energy drumming may not be the star of this show, but it’s a vital part of the experience, and it’s a kick to listen to the album at least once while focusing only on what he’s doing.

The instrumental star of the show is what Tony Proffer does with his guitar. He loads up the album with one hooky riff after another and a variety of clean leads and solos that range from bluesy squalls to soulful reverberating spirals to flights of head-spinning psychedelia. There’s more than a little throwback hard-rock and classic heavy metal in his stylings (and even some punk-fueled bottle-busting), but he’s equally adept at thrashing the shit out of the music and injecting it with savage headbangery.

Howling switch up the pacing within every song, often dropping down into a lumbering stomp while Proffer spits out his riveting solos, and then ramping up again, scattering sparks, blood spatter, and clouds of oily smoke. I found myself eagerly awaiting each new song, to see what Howling would do next. The album is never dull, never drags, never lapses into monotony. 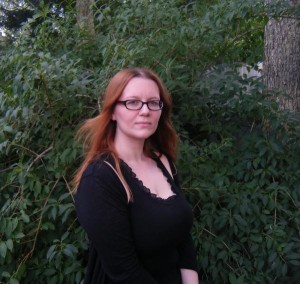 actual appearance of Vanessa Nocera when the moon is not full

And if I wasn’t clear enough in the first part of this review, Vanessa Nocera really lets it all hang out, showing considerable range and plenty of passion in her monstrous menagerie of growls, howls, and banshee shrieks.

In a nutshell, A Beast Conceived is rough, raw, garage-quality death/thrash and death/rock that’s unlike anything I’ve heard in a while. The songs are well-written and performed with passion, skill, and dedication to the fun-loving beasts in all of us. Highly recommended.

A Beast Conceived will be released by Razorback Recordings on February 26.

Oh, one more thing: How ’bout a big round of applause for Justin Osbourn from Slasher Design for creating the badass album cover for this beast?

Now here are a couple of handy links and the first two tracks on the album: “As Man Becomes Lycanthrope” and “Six Souls For the Witching Hour”

11 Responses to “HOWLING: “A BEAST CONCEIVED””