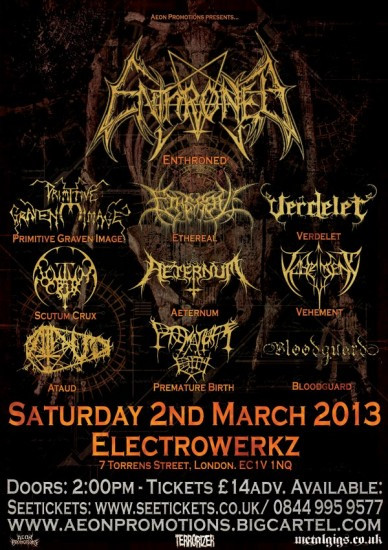 (Andy Synn wishes to bring a show to your attention.)

So Islander’s been kind enough to let me use NCS for more of my own nefarious purposes, in this case bringing some attention to a big show we have down in London next week.

Now I’m not sure how many of our readers are UK-based, nor how many of you crazy foreign-types have friends over here in this green and pleasant land, but if you are/do, then perhaps you’ll consider coming along and witnessing nine of the UK’s finest black and death metal bands tear up the stage at The Electrowerkz at an event headlined by Belgium’s finest purveyors of obsidian majesty, Enthroned.

That being the case, I thought it would be prudent to introduce you all to the various bands performing, so you can pick and choose your own favourites.

“Obsidium” was one of my absolute top albums of last year, thick with menace and a palpable sense of evil, with a truly violent vocal performance and heaving slabs of guitars straight from the very depths of hell. So I have high hopes for these Belgian overlords and their headlining set

Last time we saw these guys they were playing with us on the Derby date of the Dark Fortress tour. Their brand of extreme symphonic black metal hits all the right notes for me, and should provide a crushing display of blackened power.

One of the most established of the UK bands on the bill, with several albums under their collective belt already, Primitive Graven Image are one of those bands I’ve somehow managed to miss every single time they’ve been playing or touring near me. So I’m seriously anticipating some strange, proggy black/death grooves from these guys.

Heavy themes of death and demonology underlie the visceral approach of Verdelet, and some of our European readers may have caught them on tour with Nachtmystium and Dark Fortress, or have heard their debut album Return To Dust when it was released last year. Definitely a band in the ascension.

A three-piece black metal band with an obsession with astral horror and lurking darkness. They’ve recently shared stages with other NCS faves De Profundis and Ancient Ascendant, bringing their primitive bludgeon and transcendental vibes to new and unsuspecting audiences.

Blackened death metal abominations and staples of the London underground metal scene, Aeternum released the killer EP Through Death We Ascend last year, and should provide a welcome kick in the teeth.

Black metal rarely comes as scathing as Vehement, their razor-sharp twin-guitar attack producing a storm of slashing riffs and strangled leads. They’ve got a new album out soon, too, so keep your eyes and ears open for that.

Gruesome and macabre, the South American Satanic Metal of Ataud will bring a sense of blood-curdling horror to the day’s proceedings, offering a fresh and slightly different take on the band’s pitch-black ancestry.

Pure extreme metal with no rules and no pretensions, Premature Birth blend a pugnacious, ugly death-metal groove with an acidic black metal attack, to cause maximum sonic devastation.

You know us by now, surely? Well, we’ll be playing a mix of old and new material at this show, focussing on our heaviest, most death-metal side. We’re also debuting a monstrous new track – about the predatory nature of time itself – that’s one of the most crushing things we’ve written so far.

We’re on nice and early, so make sure you (or your friends) get down as soon as you can.

2 Responses to “ENTHRONED – LONDON, MARCH 2ND – WITH SOME OF THE CRÈME DE LA CRÈME OF THE UK UNDERGROUND BLACK/DEATH METAL SCENE”