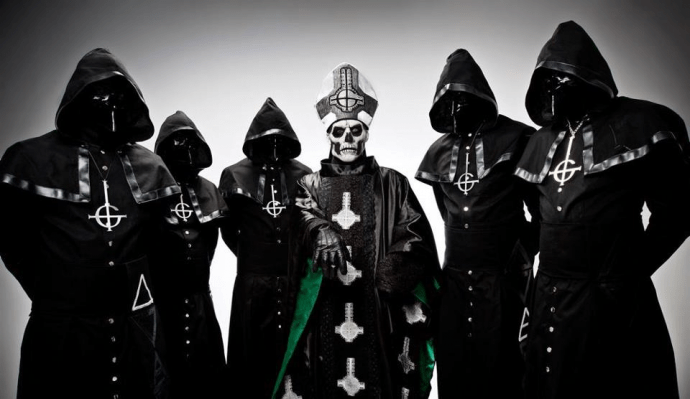 The Nameless Ghouls in Sweden’s Ghost B.C. have jealously guarded their true identities, which makes it so surprising that without much fanfare they’ve now revealed them for all the world to see.

Earlier this month the band released a track named “Year Zero” from their forthcoming second album Infestissumam (Latin for “hostile”), which is due for release on April 9. Today they premiered an official video for the same song. Apart from cryptic images of children, the main action consists of a group of women of different ages assembling for a visit by their lord and master and a light repast of raw steak, grapes, and goblets of wine.

All of this proves to be simply spiritual and material nourishment in preparation for donning the costumery of Ghost B.C. and finishing off the track in the garb to which we Ghost fans have become accustomed.

So there you have it. Secrets revealed. And that’s not all that’s revealed: we get to see the band members buck nekkid when they change clothes. Which means this video is NSFW.

The song is pretty much what we’ve come to expect from Ghost —  a catchy melody with satanic lyrics and a style closer to Blue Oyster Cult than anything rolling down the metal mainstream of 2013.

Here’s the video. And yes, I’m joking about the revelation of the band members’ identities.

5 Responses to “THE “YEAR ZERO” VIDEO: AN INSIDE LOOK AT GHOST B.C.’S PRE-PERFORMANCE RITUAL”