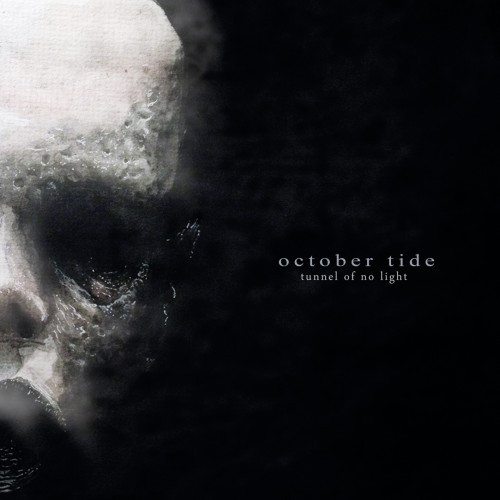 (In this post DGR reviews the new album by Sweden’s October Tide, which is out now via Pulverised Records and available on Bandcamp.)

October Tide can’t seem to catch a break, can they? Even after pulling off the miraculous feat of resurrecting the band and releasing a pretty good comeback disc, they still wind up losing two members in vocalist Tobias Netzell and bassist Pierre Stam. Granted, those two eventually went on to release In Mourning’s The Weight Of Oceans (which was my overall album of the year last year), so all was not lost, but it was a little bit worrying that we might never hear October Tide’s brand of funeral doom again. However, the band pulled off wrangling in two new musicians and now October Tide have returned again – never to be discouraged by their issues with lineup shifts – to release Tunnel Of No Light, a much darker, more melancholic take than its predecessor A Thin Shell.

The moodiness that this album conveys seeps its way into everything, including the artwork – which is probably one of the best representations of the listening experiences of both the group’s most recent discs. Whereas A Thin Shell seemed to find a frail beauty in its depression, Tunnel Of No Light is what happens when more hopeful things that may have been hinted at previously don’t work out. It is a disc so bludgeoning and overbearing in its sadness and gloom that by the end of the album the listener almost feels like the husk portrayed on its cover.

Two interesting stories are at work within this disc on the personal front. One sees the reuniting on record of the two Normann brothers, with Mattias returning to a familiar role on bass, and the other being the addition of Volturyon vocalist Alexander Hogbom to the band. Despite these two shifts, however, the music contained on Tunnel Of No Light makes a pretty clear statement that October Tide still feels like Fredrik Normann’s band. It is an unwavering consistency to their sound that operates in differing shades of black, and because of this, some folks may find Tunnel Of No Light a little bit more difficult to get into. 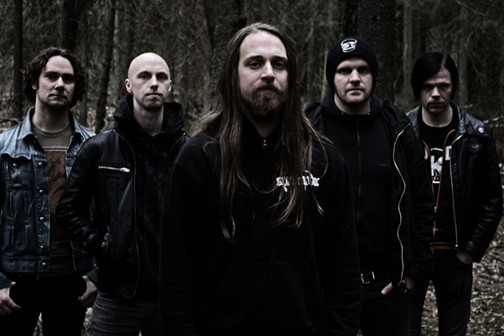 This seems crazy to say, given its odd placing on the disc, but album closer “Adoring Ashes” is probably going to be the most familiar to people who may have fallen in love with the 2010 iteration of the band on A Thin Shell and the song “Blackness Devours”. It’s a slow-moving song that has a beautiful melody underlying and supporting much of it. Its opening feels dark and very much in line with the rest of Tunnel of No Light, but it builds so well. Album opener “Of Wounds To Come”, on the other hand, really sets the tone for much of the album with its instant crash and opening dirge. Its title and lyrics are also less poetic and introverted, this time fully displaying the misery of such music with brutal and honest imagery. A line like, “The horizon is a reminder of wounds to come”, is such a downer and it really helps accomplish the sort of gloom October Tide are aiming for this time.

Despite this, there’s actually a few songs on this album that are relatively up-tempo as well – not in message or theme, but in actual song structure. Perspective applies, of course. Up-tempo for a band like October Tide means that you actually reach something that most bands would call mid-speed, but in the case of October Tide when these moments pop up, they feel like melo-death. “Our Constellation”, for instance, actually feels fast at times despite it’s eight-minute song length. It’s a hell of a deception and one that is masterfully pulled off. “Watching The Drowners” is another mildly up-tempo song and it also feels as close as the band will veer to something like a gothic-doom sound. It has a great guitar part throughout the back half that would actually fit in well with a melancholic rock band, although since this is October Tide it’s just a brief bit of light before we’re crushed alive by the following song, “In Hopeless Pursuit”.

Alexander Hogbom does an excellent job fitting in as the band’s new vocalist. Though this may be Fredrik’s band, October Tide get extensive mileage out of their choice of vocalist, and his death growl fills in well. It’s a huge, slightly higher roar than Tobias used, but it is as expressive as ever. It’s also relentless in lining up with the lower tones used throughout Tunnel Of No Light – which contributes to its overall oppressive atmosphere. No longer are the band some frail, depressed creature – now it’s a hurt-and-pain-filled beast. Given this theme, Mattias Normann gets a bit of the spotlight since the guitars are so low and often rhythm-focused that the bass sticks out with its rumble. It darkens the whole CD by quite a bit.

The more veteran members of the band make themselves known, though doom isn’t usually a genre given to much showmanship. Still, Emil Alstermark and Fredrik are capable of writing some great melodies that quickly become the hallmark of each song. They experiment with the occasional effect on their guitars and it helps to break things up when they aren’t often in sync with Robin Bergh behind the kit.

Tunnel Of No Light is a more overtly depressing disc than A Thin Shell, and as such, finds itself in the difficult spot of sounding like a more traditional doom album.  It feels like the elements that would slowly lull a listener into their misery are gone, the music instead dealing strictly in the realm of pain and anguish. Those places where one might once have found beauty in the band’s dissonance are now gone – and the band now challenge the listener to join them on their path of self-abuse. It’s these elements and the band’s choice to go more rhythm-focused than before that give Tunnel Of No Light the feel of being a darker album than the band have put out before. Even when the pace quickens it still feels like we’re on a journey traveled by crawling on our knees. At some points you can find yourself sympathizing with a creature that utters, “I’m no stranger to emptiness”, but other times it feels like an effort to actually know this sort of person, and really understanding the spirit of such an album requires a huge investment.

Tunnel Of No Light may not have the instant appeal of some of October Tide’s other discs, but if you’re the type who likes to journey into the sad and depressing realm of melodic doom then it is a trip well worth taking. You’ll just have to be aware of the fact that the band aren’t as inviting this time around and are going to envelop you like the night and make it hell for you to escape.

6 Responses to “OCTOBER TIDE: “TUNNEL OF NO LIGHT””