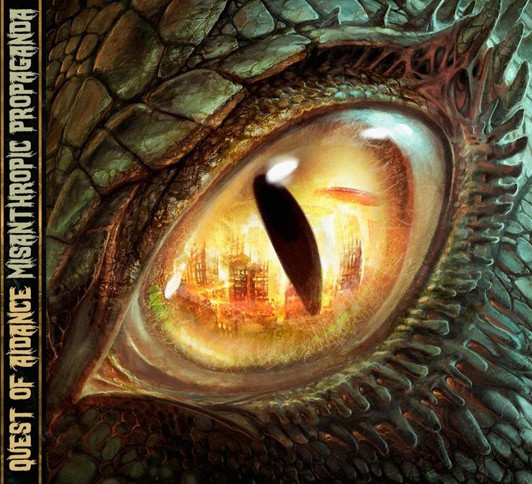 (DGR wrote this review of the new album by Swedish group Quest of Aidance. It’s scheduled for release on June 3 by Pulverised Records.)

Quest Of Aidance’s Misanthropic Propaganda is one of the few albums out there that can effectively be described as a blur. It’s a sometimes incomprehensible, speed-focused chunk of deathgrind that at fourteen tracks still feels incredibly short – if not just because pretty much every song on it moves at breakneck speed and rarely slows down for anything.

Most of us are probably familiar with the 40-second smash-and-grab of a song known as “Anyx” that was the band’s recent premiere (outside of a couple of demos), but it hardly represents the rest of this disc. In fact, it feels almost like no one song really represents Misanthropic Propaganda. It feels like fourteen different, really fast experiments in death metal with the occasional leaning toward grind. It’s an album that at times can feel a little too familiar to those who know the roster of musicians that make up the band, but is still interesting and varied enough to be appealing.

Misanthropic Propaganda is a rare breed because it is one of those albums that doesn’t make an immediate first impression. Most albums you can get a spin or two in and you’ll find yourself in love-it-or-hate-it mode by that point, but I found myself acknowledging that the music was enjoyable but not settling on a lasting opinion. However, I have been drawn back to the disc because something about it hinted at far greater things, as if buried beneath those layers of blasts and walls of guitars there would always be something new to discover. It has – for lack of a better term – pulled me into its grip. 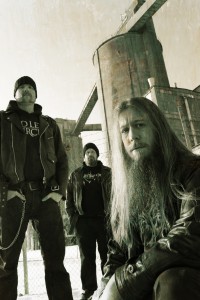 Given the band’s propensity toward hammering out something really quick and moving along in a sort of psuedo-grind ethos, there’s still usually one or two really neat eggs buried in the massive wall of noise that gets flung the listener’s way. For instance, at first the song “Red Dust” doesn’t seem to be much of anything but another death metal tune, but then it turns on itself really quickly and adds a minor layer of keyboards that contributes a really catchy melody to the whole song. It seems to then bounce up and down in between blasts, and yes, the whole chorus section can easily get stuck in your mind long after the three-some-odd-minute affair is over.

When things like that happen, Misanthropic Propaganda becomes tremendously enjoyable, and a majority of the songs on the album pull off similar feats without effort. Each song appears to be one thing but then quickly either shifts into strange territory, playing with some really odd rhythms and guitar grooves, or adds far more melody than the band’s chosen genres typically exhibit.

It’s those moments where I think Quest Of Aidance really won me over – because now, every listen to Misanthropic Propaganda provides not only a solid dose of death metal but also the occasional nugget of something different. I’m not entirely sure how much credit should be given to the fact that two of the guys in this group have also been in Miseration, but if you’ll recall from when I reviewed their disc last year, one of the things that really stood out was how the band were really given to angular melodies and weird guitar riffs alongside their everything-and-the-kitchen-sink approach. Some of that influence bleeds through into Quest Of Aidance as well, although in a much more slimmed-down form.

The group have something of a science fiction theme attached to them, so it should come as no surprise that the music sounds a little alien at times. (The band somehow manage to work in a synth that sounds startlingly close to a theramin in a couple of different songs.) Perhaps leading off with “Anyx” wasn’t the strongest approach, but no matter what they might have chosen, no one song off of Misanthropic Propaganda could have truly defined the group. There’s a bunch of really good headbangers for sure, and “Anyx”‘s followup “Dimout” makes for a hell of a one-two punch. “Sirian Breed” is another very good blast that goes by quickly.

“Sector 34” has a catchy as hell guitar lead that practically makes the whole song, and the solo that follows is so gloriously cheese-filled you can’t help but be excited by it. “Spawnlayer” is a two-minute, bass-heavy grinder of a track that makes up for the band’s more experimental efforts throughout the whole disc by being remarkably straightforward. It also has a fantastic name that conjures some pretty gross imagery – the fact they actually scream SPAAAAAWNLAYER is a bonus. 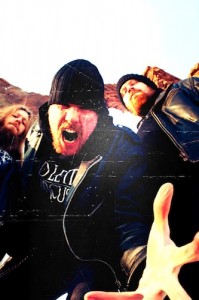 Although having been somewhat dormant since their formation in 2004 (with the exception of the occasional spark of life in the form of some demos), the group have maintained a pretty solid  lineup with the newest addition (as of 2011, so he’s a veteran at this point) being the manic vocal stylings of Daniel “Daaz” Valström, who has a very high and throaty scream. The guy can jam a bunch of words into one sentence and his vocal patterns are very percussive. Since much of what happens in Quest Of Aidance is done over blasts, he makes the admirable effort of following right along – leading to the band sounding like they’re fronted by an insane person.

He’s also got a mighty as hell beard, but that’s more of a private musing.

Christian Älvestam is also present, although in more toned-down form – those hoping to hear him roar throughout the whole CD (since he does have something of a cult following) should be notified that he does a lot of the backing vocal work and the occasional loud grunt to punctuate a measure – but this is still Daniel’s show on the vocal front. Christian does a lot of the guitar and bass work within the band, too, so it’s definitely not just another project that he happens to have his name attached to. Christian Lundgren is on guitar here and his riff work is something of the main draw, since it’s those angular melodies that he comes up with that seem to accent this band perfectly. Unfortunately, I can’t quite confirm who did the drumming on this disc but major props to them. Dude is a machine.

Misanthropic Propaganda is an interesting journey into the different fortes of death metal – to say the least. It has quite a few off-kilter elements about it, but actually stays pretty close to its sci-fi concept. At its worst (which is a minor thing), it will sound like a mixture of the various band members’ different projects, but when it gets going on all cylinders it becomes an alien blast of death metal with a random hell-screamer of a 40-second song in the middle of it. The excitement of discovery as you notice the odder elements placed within each song can actually outweigh the initial adrenaline rush of each song, and that rush is already pretty high to begin with. The album jumps from solid pieces of meat to something more existential in many places, and of the fourteen songs on here, at least eight of them are in the realm of being awesome. The two instrumentals are a little weird in places, but that feels like part of the purpose of this band.

Misanthropic Propaganda has much to offer for people to enjoy, and it deserves at least one spin (which will go by pretty quickly if you’re not paying attention) just to see what Quest Of Aidance are doing with their high-minded concept.

One Response to “QUEST OF AIDANCE: “MISANTHROPIC PROPAGANDA””