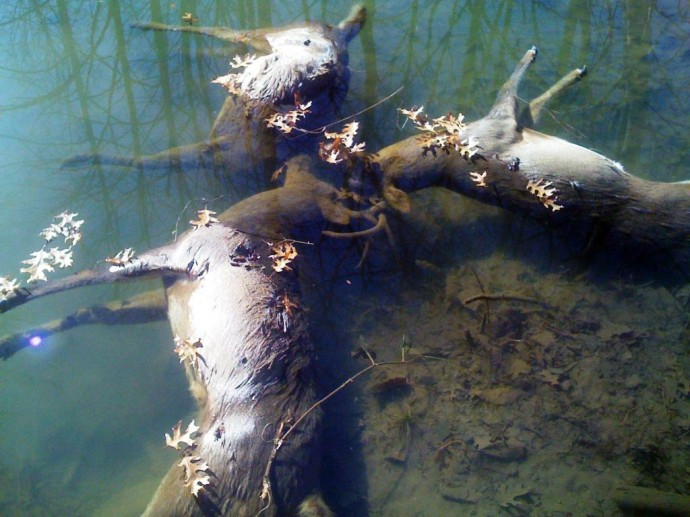 In the six weeks since I last compiled one of these posts I’ve received lots of suggestions from NCS supporters, so many that I really didn’t need to look for any items myself. When other people start doing all your work for you, I’ll tell you friends, you’re on the path of righteousness.

Today I have eight items for you, all of which I think are metal, even though they’re not music. The supporters who tipped me to these items, either by messages or by sticking them on their FB pages, are credited within or after each one.

As usual, the first item is the photo you see above. I’m virtually certain this is the first time a photo from Field and Stream has appeared at NO CLEAN SINGING. It was taken by forester Jason Good while he was surveying timber in Meigs County, Ohio, on November 12, 2010. In the words of Field and Stream’s writer:

“[H]e stumbled upon a bizarre sight that made the hair on the back of his neck stand up: In a waist-deep pool of Leading Creek, nose-to-nose like fish on a stringer, floated three whitetail deer. The experienced woodsman needed a few minutes to puzzle out exactly what he was seeing—a trio of mature bucks that had locked horns in a battle to the death, illustrating, in the starkest terms, the potential ferocity and brutality of the whitetail rut.”

I don’t know about you, but I’ve never thought of the whitetail rut as ferocious or brutal. Actually, to be brutally honest, I’ve never thought of the whitetail rut at all. But it doesn’t seem too far removed from the behavior of male human beings. We sometimes lock horns over some nonsense or another, which may or may not involve rutting, and before you know it we’ve dragged ourselves down into a pool and drowned, with our antlers still locked up.

But there is something eerily beautiful about the photos. One more is below, and others can be found here, with more info about this discovery. 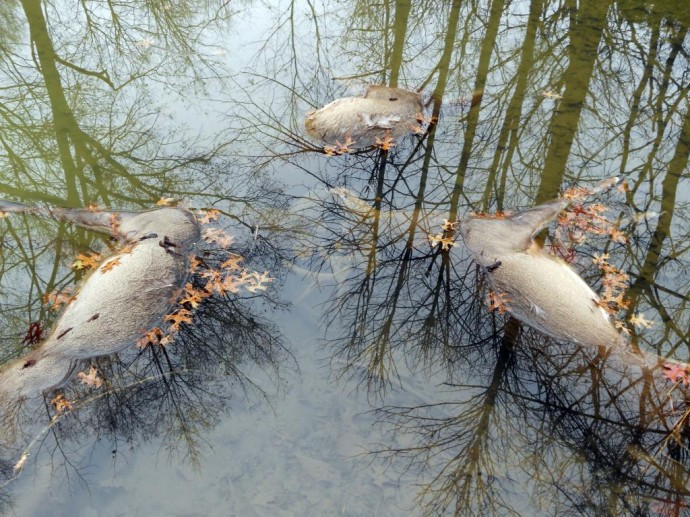 While we’re on the subject of fucknuts behavior in nature that resembles fucknuts behavior in the human world, let’s take a look at this next video. This is an ant circle — duh! — which is apparently caused when ants get confused by their own pheromone trails and just march in a circle until they die. This phenomenon is known as a “death spiral”. A circle pit to the death. How much more metal can you get?

This video and others like it can be found at this site, where the clips are introduced by this statement: “Imagine a complex society that can accomplish amazing things, but also has an error in its programming that, occasionally, causes many of its members to run amok and die tragically.” Sound familiar?

By the way, that video reminds me of the Scottie dog death spiral:

Oh what the hell, let’s stay in the state of nature for one more item. Have a look at this photo: 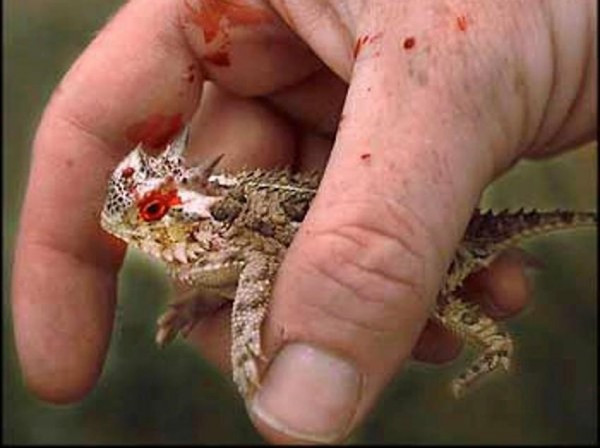 This is a horned lizard (Phrynosoma), which is pretty metal looking even without the blood. Usually, when a predator gets too close, the horned lizard just puffs itself up, much like a politician. But in truly dire situations, like when some motherfucker picks it up or a coyote starts messing with it, the lizard will fill its sinuses with blood until they explode, causing an aimed stream of blood to shoot up to 5 feet from the corner of its eyes. The blood also contains chemicals that are foul-tasting.

Yes, of course I have a video. By the way, although ants are metal, eating ants is really fuckin’ metal.

This next item is the smallest movie ever made. The Guiness Book of World Records says so. Entitled “A Boy and His Atom”, it was created by researchers at IBM, who apparently think they’re working at Disney. The stop-motion animation uses dozens of carbon monoxide molecules, moved along a copper surface with the tiny tip of what is called a scanning tunnelling microscope (STM) — a device that won its inventors the Nobel prize in physics in 1986.

The researchers took pictures of the atoms in a given configuration, then carefully moved the atoms to a new position and took another photo, and so on. When all 242 frames were assembled, they resulted in this 90-second movie:

The point of this exercise was to demonstrate IBM’s efforts to design next-generation data storage solutions based on single atoms. “In early 2012, they demonstrated a means to store a digital ‘bit’ – the smallest unit of information – using just 12 atoms, in contrast to the million or so atoms required by the device you are reading this on.” Can’t wait for them to perfect atomic data storage.

Moving molecules around one by one and making a movie out of it is definitely metal. More info can be found here.

I received the following message from NCS reader Brandon: “If you’ve never heard of gamelan, it’s something quite impressive – music from Bali made by a big orchestra of metal chimes, gongs, cymbals and drums. The pieces are big, bold and often overwhelmingly loud. It also uses a lot of polyrhythms, so Meshuggah fans should dig it!”

Brandon sent me a link to a video of gamelan performers who he had actually seen in concert — with the caveat that no film clip can convey the impact of the music in a concert hall. I know this is cheating a bit, since this is music . . . but it’s not metal music. Except it’s metal. Confusing isn’t it? 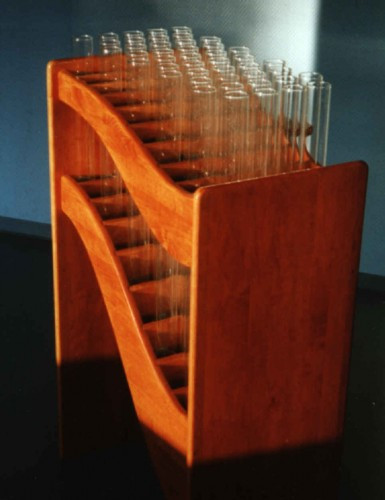 Since I’ve already quasi-violated the rules of THAT’S METAL!, I might as well just keep going with something else that’s musical.  The instrument you see above is called a Verrophone. It was invented in 1983 by Sascha Reckert and it’s made of glass. The sound is made by rubbing one end of one or more of the glass tubes, or also by striking them or rubbing them with a special mallet. The tubes are close together so that chords can be played by rubbing more than one at the same time.

The Verrophone is a modern version of the glass harmonica, which was invented by Benjamin Franklin and has been used on recordings by the likes of Radiohead, Tom Waits, Gorillaz, and Marianne Faithful. The Verrophone performer in the following video is Philip Marguerre. 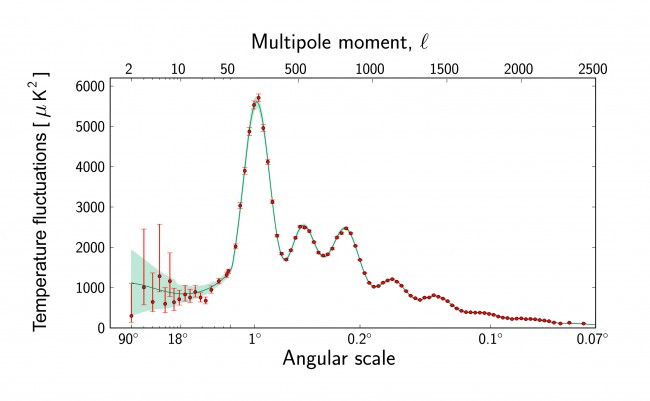 A U.S. congressman from Georgia named Paul Broun believes that the Big Bang theory (along with evolution and embryology) are “lies straight from the pit of hell” meant to convince people that they do not need a savior. Which I guess is proof positive that the Big Bang is metal. Creating an auditory representation of the Big Bang is also metal. That’s what physicist John Cramer of the University of Washington has done.

Prof. Cramer used data on the cosmic microwave background (CMB) radiation obtained from the Planck satellite launched by the European Space Agency and mapped sound frequencies to the changes in CMB radiation detected over time. Here’s part of his explanation (and I don’t pretend to understand this, but maybe some of you will):

The Sound of the Big Bang simulation includes three important effects: (1) The multiply peaked frequency spectrum measured by Planck is made into a single sound wave (monaural, not stereo) by the process described above; (2) According to the Planck analysis, the emission profile of the cosmic background radiation peaked at 379,000 years and dropped to 60% intensity at 110,000 years before and after the peak emission time. The simulation represents the first 760,000 years of evolution of the universe, as the emitted CBR rises and falls in intensity following the Planck profile; (3) The universe was expanding and becoming more of a “bass instrument” while the cosmic background radiation was being emitted. To put it another way, the expanding universe “stretches” the sound wavelengths and thereby lowers their frequencies. To account for this effect, the program shifts the waves downward in frequency to follow the expansion in the first 760 thousand years of the universe.

Okay, here’s the sound clip, representing the first 760,000 years of the universe’s expansion following the Big Bang; as DGR wrote when he sent me the link to an article about this, it turns out that the sound of the universe being born is the Brown Note. 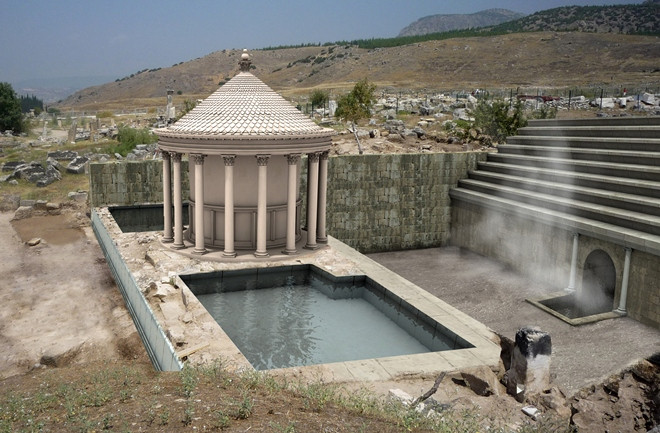 Two months ago Italian archaeologists discovered the Gate to Hell. It turns out the location is in southwestern Turkey. I suppose I should explain.

Pluto’s Gate — “Plutonium” in Latin (fitting, isn’t it?) — was a cave celebrated in Greek and Roman mythology as the portal to the underworld. Historic sources located the site in the ancient Phrygian city of Hierapolis (now called Pamukkale). It was described as an opening in the earth that was filled with lethal vapors that killed any animals or birds who ventured into the cave.

The Italian archaeologists who found Pluto’s Gate also discovered a vast array of ruins, including columns dedicated to the deities of the underworld (including Pluto, of course). They also found the remains of a temple, a pool, and a series of steps placed above the cave — all matching the descriptions of the site in ancient sources.

Poisonous vapors still lie within the cave. As one of the archaeologists reported, “I threw in sparrows and they immediately breathed their last and fell”.

The photo above is a digital reconstruction of the ancient site based on the ruins that have been discovered so far.

More info can be found here. I found this item on my own.

That’s all for this edition of THAT’S METAL!  As always, enjoy the rest of your fucking day.