Did I hear any good new music yesterday? Well, I’m glad you asked. The answer is Fuck Yeah, I did. That doesn’t make yesterday all that different from any other day. Maybe I’m too easily pleased, or maybe I just spend more time looking than the average person, who may differ from me in that they have a life. Or a life outside of a potentially unhealthy obsession with metal, which is what I have.

Where the fuck was I?

These three fine gentlemen from Ireland are a FUCKING NOISE MACHINE. Originally their words, not mine, but actually they’re now my words, too, because yesterday I saw and heard their new video for a song called “Brain Face”. I have a hard time separating the song from the video, even though the song itself is a free download at Bandcamp and therefore can be heard without the video. But I like the video so much that in my mind it’s inseparable from the song.

The video is nothing more than a well-photographed, very well-edited film of the band playing the tune. But Murdock are so intense, so manic, so thoroughly into the music that it makes a song that’s already damned infectious (and superheated) into something even more contagious (and superheated). “Brain Face” (the song) is a raucous, shrieking, violent banshee of hybridized hardcore, mathcore, metal, and mayhem. It’s so borderline out-of-control that it shouldn’t be memorable, but it damned well is.

Vocalist/guitarist Aidan Cunningham sings and plays like he’s coming apart at the seams; drummer Ronan Nolan throws himself so wildly into his kit-smashing, and his facial expressions are such a hoot, that it will put a big grin on your face unless you’re a Grade A tight-ass; and bass-player/backing vocalist Michael Keyes moves like a big bear that’s just taken a few thousand volts straight to the brain stem.

Though the music isn’t a clone of what The Dillinger Escape Plan do, there are similarities, and although this trio may not be agile enough to climb amp stacks and swan dive into crowds, they’ve got some of that DEP spirit in the way they throw themselves into the show. My hat’s off to people like this, who can hurl themselves around a stage like ball bearings in a wind tunnel while playing intricate compositions at the air speed of an African swallow. I bet they’re a shitload of fun to watch live.

Some relevant links are below, followed by the “Brain Face” video, and I’d also recommend the interesting recent interview these dudes did with Terrorizer (here). I further recommend reading the lyrics at their Bandcamp; they’re a cut above the average. 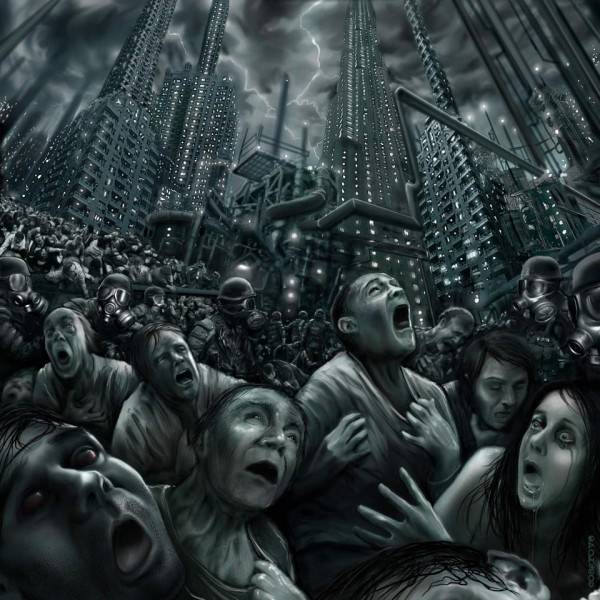 Saprogenic are a Detroit band who I hadn’t known about before yesterday, despite their having released two albums with attractive names — The Wet Sound of Flesh On Concrete (2003) and Ichneumonid (2006). However, because approximately seven years have passed since their last release, I’m going to forgive myself for being ignernt.

They appear to have recorded a new album entitled Expanding Toward Collapsed Lungs (they really do have a way with album titles), which will be released this summer by Willowtip Records. Yesterday they delivered the album’s first single, “Navigating the Human Eye” (they’re obviously a dab hand with song titles, too). I found out about the song because a small army of other bands I follow on Facebook, including The Black Dahlia Murder, posted statuses recommending it. This turned out not to be hollow praise.

I mean, shit, I think this song ruptured my spleen. It’s downright vicious, loaded with down-tuned machine-gun riffs, merciless kit-work. and beats that will crease skulls. I’m afraid the vocals are going to give me nightmares, too. Suffocation and Hate Eternal come to mind, or they would if I still had a mind. If you’ve got any protective padding lying around your crib, strap it on and press play on one of the pain inflictors below. 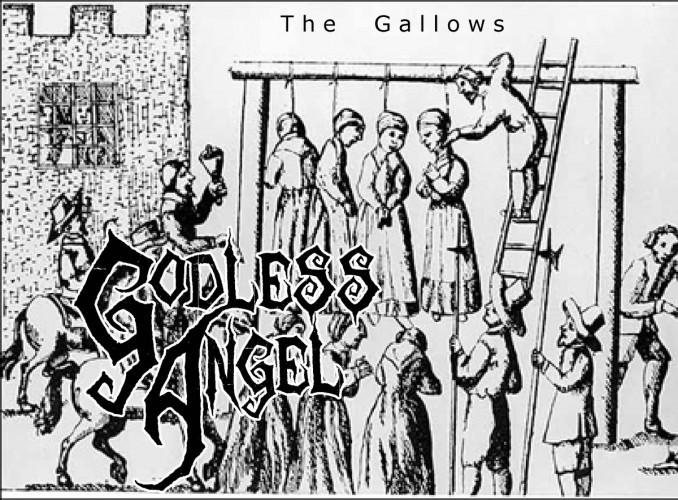 Godless Angel is the one-man death metal project of Kansas resident Derek Neibarger, who happens to be a supporter of this site without me knowing that he’s a one-man death metal machine. There’s no telling who else may be an NCS fan with a secret. Possibly Pope Francis is the guy hanging around who calls himself FistedByAGorilla. Or not.

Oh yeah, Godless Angel. Well, it turns out that last month Godless Angel put up a song on Bandcamp for pay-what-you-want download. The song is “The Gallows” and damn if its ill riffs and pneumatic rhythms didn’t get under my skin. And beginning at about 2:25, Derek lets fly with an extended, eerie, screaming guitar solo that set the hook even deeper. Oh, and if you’ve been meaning to re-paint your walls, Derek’s vocals will strip the old coat off for free. I like this and would be happy to have more, please.

UPDATE: Turns out that I (and you) can have more. The Godless Angel Bandcamp page includes eight more songs, all available for “pay what you want”, and two of them added just a couple days ago. Check ’em out via this link. “The Gallows” is below.

3 Responses to “SEEN AND HEARD: MURDOCK, SAPROGENIC, AND GODLESS ANGEL”