EDITOR’S NOTE: A French reader of this site whose moniker is Eldhoraz has devoted an impressive amount of effort gathering and analyzing data from Encyclopaedia Metallum about the release of metal albums over an extended period of time. He has organized the information both within geographic regions and according to eight metal genres and has created a variety of interactive charts displaying the results.  At the end of this article, you’ll have the chance to download a spreadsheet file containing his analysis, along with a document describing his methodology in further detail. Very interesting stuff, and we’re very happy to share it with you.

Well. Although I spend all my spare time listening to and fun-facting about metal, I’m basically a graduate student in a scientific field. And when these two aspects of my personality spend a night together, there comes, sometime later, this cute and cheeky baby.

Here and there, I often read sentences such as, “Finland is definitely the most metal country on Earth,” or “I knew Southeastern Asia was mostly death metal,” and it inspired me to quantify “metalness” in time and in space, in order to distinguish the factual from the fictional.

So I spent some days – and some nights – on the amazing database of Encyclopaedia Metallum, collecting data to satisfy my curiosity. And here are some of the interesting things that came out of that analysis.

First, I’d like to denounce an urban legend: Finland is NOT the most metal country on Earth. It’s Luxembourg! Well, if we don’t consider countries with fewer than 500,000 people, Finland wins up the irons, with 1780 bands per million people. Finland is followed by Sweden (1129), Norway (781), Denmark (363), and… Estonia (342) ! Needless to say, it seems that Northern Europe has the touch. In comparison, the United States ranks 25th with only 150 bands per million people, the UK ranks 24th, France is 27th, Germany 9th, etc. But Finland is even more impressive. It is not only first in the general ranking, it’s also the most metal country in every granular metal sub-genre defined for purposes of this analysis!

But these insights are not the only ones that the data give us. We also obtain interesting charts like this one: 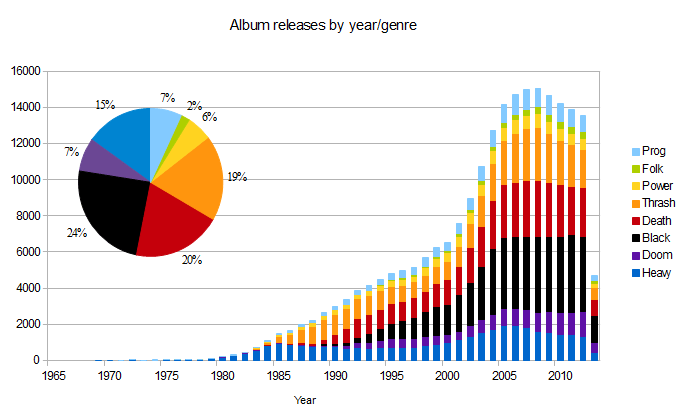 It shows us the evolution of album releases across the whole world. We see that metal is highly dependent on the dynamism of the music industry and the medium in which it propagates. The invention and popularity of CDs in the late 70’s and early 80’s triggered an impressive acceleration of record releases across the world, thanks to the increased ease of producing and obtaining albums. It also demonstrably led to the accelerated growth of metal scenes in countries distant from the West.

Similarly, the invention of the Internet boosted the growth of metal in the late 90’s and early 00’s, and in even more recent years the availability of metal has again boomed due to the increase in digitally self-released albums, and the increased ability of new bands to disseminate their music via a widespread broadcast. We can also see in the data the dramatic influence of the most recent global economic crisis, which has had a dampening effect on releases despite the development of the Internet and the rapidly growing number of digital-only releases.

The data also show the varying effects of the crisis on releases by bands in different countries: 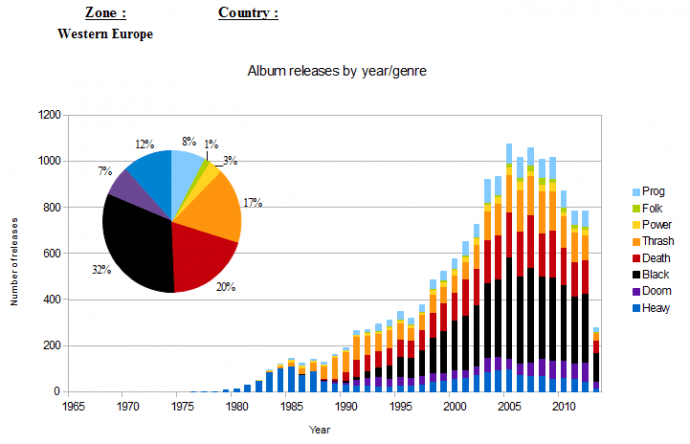 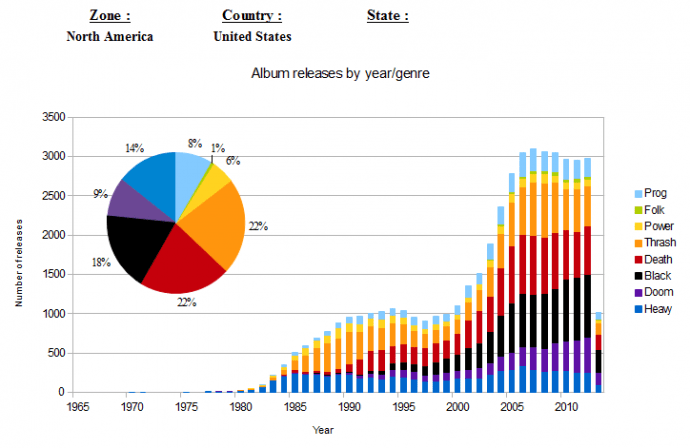 For example, we note that American bands on average seem to be more independent of the labels (whose business we would expect to have suffered from the economic downturn), and therefore production of albums didn’t decrease during the recession, while it shrank in an unprepared Europe.

Another interesting thing about the American chart is the diminution of album releases from 1994 to 1997. This may be explained by the sudden expansion of the grunge scene and the creation of a large alternative rock/metal offspring that largely wiped out metal from the mainstream, and partly from the underground, for five years.

The Metal Archives information is also revealing about local preferences among metal subgenres. For example, in the US, the scenes are mostly thrash and death oriented, while in Western Europe, black metal wins. And as Islander would say, “black metal is the most saturated subgenre”.

The reasons for these variations in local preferences remain to be discussed and explained, as do the differing musical evolutions within each of the various geographic zones and their link to local economic, societal, and political conditions. Metal is in opposition with society, but, as the subgenres embody different philosophical positions, their distribution among countries may give us information about the mood of the underground and its impact on the country in which it evolves. If Norway’s and Sweden’s metal preferencies are so different, for example, it is because Norwegian and Swedish societies must somehow be drastically different. 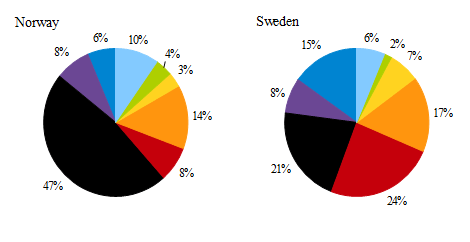 And by the way, yes, black metal IS the main export product of Norway.

One last important feature of the database is that it also allows us to study the dynamics of the expansion of an underground trend. For example, the following map enables us to monitor the expansion of doom metal in the last decade across the United States: 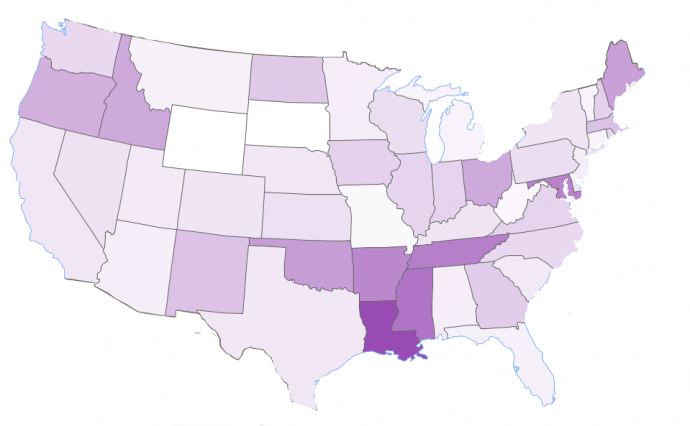 We can observe the expansion of doom/sludge, apparently originating in New Orleans and spreading around in the neighboring states. I haven’t tried it yet, but it would be interesting to visualize the expansion of death metal from Florida, or the second wave of black metal from Norway, etc.

For those who are interested, the file I worked with can be downloaded from here:

In the archive, you’ll find a “Read Me” explaining how the file works and how you can play with it. Don’t do as usual. Read it.

32 Responses to “THE TRUE MEANING OF MATH METAL: A STATISTICAL ANALYSIS”