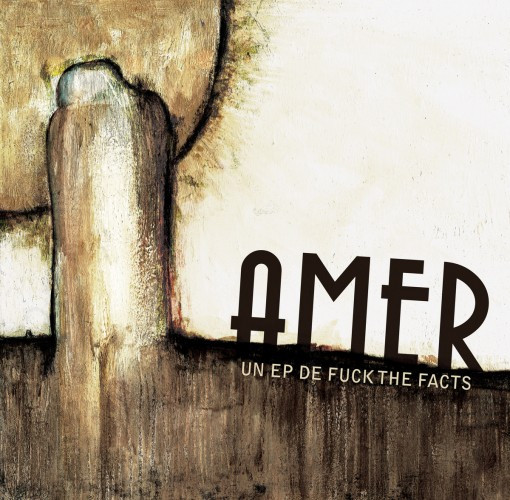 Just so you know where I’m coming from: I like grind but I don’t consider myself an expert in the field. Many people are far more passionate and knowledgable about every nook and cranny of it than I am. I do know enough to know that there is considerable variation in the music, despite what some people even less knowledgable than I am might think. I also know that Fuck the Facts aren’t your average grindcore band. Over the course of more than a decade’s worth of records and with a line-up that has remained stable for about the last five years, they’ve evolved into something exceptional, and the qualities that make them so worthy of attention are on full display in their forthcoming EP, Amer.

Amer’s music is complex, technically demanding, and in a near-constant state of flux within each of the EP’s seven songs. Those songs aren’t long — five are in the two-three minute range and two are less than two minutes long — but the band pack a lot of variety into those relatively small containers. They can definitely explode with blast-beat shrapnel and a blistering wall of accelerated guitar noise, but that’s only part of the story.

Fuck the Facts also come at you hard with industrial-strength jackhammer riffs and a ton of pulverising groove, accented by a massive bass guitar that oh-so-briefly even takes a lead role in the music. They rush ahead with convulsive rhythms, like a freight train with the trottle open. They drop heavily into slow, lumbering movements that produce a sensation of being slowly crushed into dust. They even weave swirling, near-clean lead-guitar melodies through the heavy explosiveness of the other instruments.

The music is salted with many other small touches as well — the discordant solo guitar arpeggios that begin “A Void” and “Amère”, an infectious snare beat that launches “Une triste vue” and a melancholy acoustic guitar melody that closes it, reverberating keyboards in the conclusion of “L’enclume et le marteau”, and ringing melodic chords that surface in “A Void”, just to name a few of the moments that make Amer interesting as well as battering.

In addition to a pronounced emphasis on groove, the significant weight at the low end of the sound, and the presence of surprising melodies, the other thing that really struck me in listening to Amer was an identifiable infusion of hardcore style here and there, including a heavy breakdown in “L’enclume et le marteau”. At times what I heard made me think of Converge. 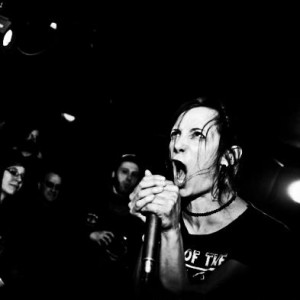 Although the music is arguably less cacophonous and chaotic than some of the band’s previous work, it still feels right at the edge of coming unhinged, thanks in part to Mel Mongeon’s raw, harrowing vocals — the sounds of someone who’s eviscerating herself with a jagged blade but is going to have her say before the light goes out. Man, she gives 110% on Amer, as she always does, and her unsettling shrieks are again effectively complemented by the lower growls and abrasive yells that I assume are coming from Marc Bourgon and/or Mathieu Vilandré.

Amer will be out on June 18. It can be pre-ordered on 10″ vinyl or cassette HERE and it can be pre-ordered as a digital download at the Fuck the Facts Bandcamp page HERE. The EP was mixed by Topon Das and mastered by Scott Hull (Pig Destroyer). The artwork was created, as usual, by Mel Mongeon. 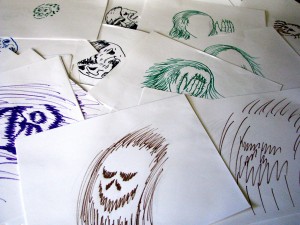 Now, would you like to watch a video? Yes, I think you would. It’s for one of the new songs (“L’enclume et le marteau”) and it’s an animation created by Osborne Oddities. Here’s a fun fact about the video: It was filmed using over 800 different hand-made drawings, and Fuck the Facts will be including one (or more) of the drawings with every Amer 10″ vinyl record. You could get a mouse or a grenade or a gorilla or a scary-looking demonic kind of thing or a man hanging from a head-tree, just to name a few examples. Nice, eh?

P.S. After you watch the video, or before, you can go hear a second new song (“Vent du nord”) that premiered yesterday at MetalSucks.