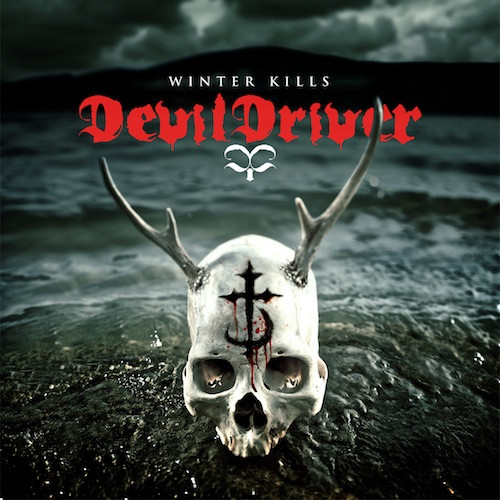 (DGR has been a reviewing machine lately, and here’s another one. At the end of the review we’ll also give you details about a just-announced North American DevilDriver tour with Trivium, After the Burial, and Sylosis.)

Before we begin: A career retrospective and my own personal feelings on each disc to help explain why you’re seeing DevilDriver on this site.

I was one of the people who got into Devildriver with their debut release. I had been aware that they were the new project of the lead singer of Coal Chamber, but I wasn’t the type to begrudge him for having been in a band I didn’t quite enjoy. I was late to the party, one of the people who saw “I Could Care Less” pop up on Headbanger’s Ball. I thought their first disc was a pretty heavy release, trapped somewhere between a three-way pull of nu-, groove-, and -core metal.

2005’s The Fury of Our Maker’s Hand saw the band making a conscious effort to change things up and play with their sound, though it seemed to come by way of a million different guitar pedals and not much else.

Like clockwork, the group returned two years later with an album that I think they fucking nailed it on, with The Last Kind Words. The album went straight into groove territory, with flashes of death and speed for good measure. Many of the songs were highlighted by punishing drum performances, and they really stepped up the guitar game. This is also about the time when all the videos of massive circle pits at their shows found their way to YouTube. I guess we really do reward good stuff. 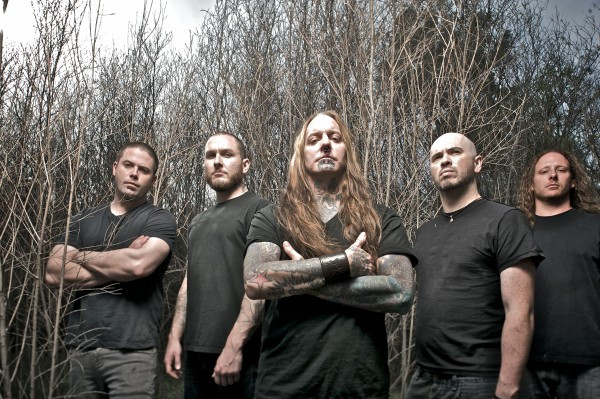 However, I wasn’t quite as enthused with Pray For Villains. It felt hit or miss, and while they did iterate and experiment somewhat, some of what they did backfired. Dez got a little froggy-sounding on this release, and it was enough to take the wind out of my (admittedly thin) DevilDriver sails.

And again, with two years having passed, in 2011 the band put put Beast, which just felt like DevilDriver spinning their wheels. The one song that really stuck out for me was the cover of “Black Soul Choir”, and not much else. There is something to be said, though, about the amount of good will putting out a release like The Last Kind Words engendered, and like the sun rising in the east and setting in the west, two years have passed and DevilDriver have another disc out.

This time, however, they’re at a nexus, with a solid lineup, a new label, and no serious expectations weighing upon them. It’s the first time in a while that it seems like the band are creatively free, and for me, that was enough to peak my somewhat morbid curiosity with 2013’s Winter Kills. I wanted to see if the band could hit previously reached highs…hell, I wanted them to, because if you’ve shown that you can hammer out an amazing disc before, you should be able to slam one out again. Maybe its just me cheering for the underdog again, because I know a lot of our more curmudgeonly metal family members want to see these guys bomb.

With all that set up, then, how does Winter Kills actuality fare?

Rest assured, Winter Kills is probably DevilDriver at their most vicious in a while. In a way, it’s also probably the safest they’ve played it in a long time. They decided to take Winter Kills and reign it in incredibly close to the speedier and more melodic version of DevilDriver present on The Last Kind Words, and as a fan of that disc, I find Winter Kills exciting.

They still play with their sound a ton, too, but most of the time that comes off as a little odd. It seems that the DevilDriver sound is such that if they even move an inch in a different direction, it alters the entire mood and flow of a song. It’s like the one formula that they discovered was incredible, and when they stick to the heavy guitar leads and double-bass-roll drumming it comes out great, but if they add one other element to the formula it either does the cartoon puff of smoke and disappears or, in the case of Winter Kills, the whole damned lab blows up, leaving the band standing there charred black ala Bugs Bunny.

Thankfully. the aforementioned episodes are few and far between, and most of the time those episodes just work out to be kind of, well, boring. The only one that is distinctively groan-worthy has to be the poorly informed cover of the AWOLNATION song “Sail”, and even then, it’s kind of endearing due to how weird that song is. It’s one of the few songs that I can even think of where it can be described with a sigh and expulsion of the air in your lungs, and that’s all. Hearing Dez Fafara add on a full-blown, Southern stomp to the word “Baby” at the end of each sentence, so that it comes out “BAY BAAAAAAAY” . . . . And that song closes out the disc! DevilDriver are fucking nuts!

I know it’s odd to bring that up as the first thing to discuss about Winter Kills, but the song is such an anomaly that I just had to get it out of the way before getting down to brass tacks with the songs that are actually good. 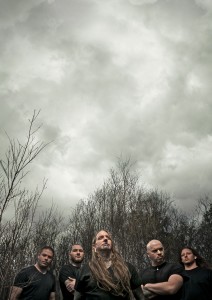 Other than the last track, DevilDriver deliver a solid set of songs. with each one clocking in at close to four and a half minutes or higher, so you can’t fault them for not providing a ton of material (especially if you have the special edition). “Ruthless”, which was the one of the first singles revealed by the band, is a pretty strange take on the DevilDriver formula – pulling heavy influences from the sludge, stoner, and Southern rock scenes to provide a bit of a swing to a song that has a hefty groove in it. It’s not the strongest on the album, though, because where DevilDriver really kill it is when they resemble a groove band via melodeath scene and are going at top speed. That’s when they really hammer it, and they get up to a lot of that on Winter Kills, more so than on Beast or even Pray For Villains combined.

“Ruthless” is bookended by “The Oath” and “Desperate Times”, which are consistent windmillers. The riffs of those tunes are practically designed to spin up a circle pit and leave hair moving in a circle. The song “Curses And Epitaphs” later on in the disc follows a similar formula, including a guitar melody defined in the opening that weaves its way throughout the song, whether in constant shred form or simply reprised from the opening.

Jeff Kendrick and Mike Spreitzer are a heck of a guitar duo on this disc, and they’ve been that way for some time, too. DevilDriver have always had a relatively consistent lineup, with the exception of whoever is on bass (after longtime bassist Jonathan Miller left in 2011) – in this case it’s a job given to Chris Towning to bring up a fat-sounding bass section.

Personally, my highlight and favorite weapon in the DevilDriver arsenal has always been drummer John Boecklin because the dude just never reigns it in. Winter Kills is one of the cases where he really gets to run wild. He’s proven time and time again that he is ludicrously quick on a double-bass pedal and will do a ton of hi-hat runs to open up songs, and his drumming has taken on a heavy tribal element as DevilDriver have inched into the groove genre.

A couple of songs on Winter Kills are just groove, including one seemingly designed entirely around an almost breakdown-esque downward chug (“Gutted”), and like the others in that vein they’re just not fantastic. “Gutted” is at least shorter, so at worst it’s inoffensive and over before you notice. When the band go back to the speedier tunes, as in “Haunting’s Refrain”, Boecklin still incorporates many of the tom-heavy playing styles now, and it makes the back-end of the usually guitar-dominated speed songs really fun to listen to.

Winter Kills is the first disc where the band seemingly have no insane label pressure on them (although they were consistently high performers during the Roadrunner days). You can tell, because Winter Kills is DevilDriver boiled down to their basic formula, returning multiple times to the well that worked for them before. Thankfully, most of the pulls tend to be of The Last King Words quality, and as noted, that makes a good chunk of Winter Kills exciting to listen to. As someone who has been following DevilDriver for a while, you have no idea how good it feels to say that, rather than going, “Well, it’s another disc by them”.

It’s not perfect. Once again, you’ll find yourself skipping around — the whiffs on Winter Kills whiff pretty fucking hard — but the quality of the songs that make up for those misses keep the whole experience in the positive category. It’s probably a common thing that when a band is so clockwork-consistent with the two-year release cycle, their CDs start becoming half-and-half. But with ten original tracks on Winter Kills and a cover, you wind up at about 70% — three whiffs, one ultra-dumb cover that becomes gloriously stupid, and seven good DevilDriver tunes. For me, they may have peaked during The Last Kind Words era, but it is nice to hear them getting within striking distance of how great that disc was once again. The promise remains enough to keep them on people’s radar.

EDITOR’S NOTE: Winter Kills will be released on August 27 by Napalm Records and is now available for pre-order on iTunes and Amazon.

Yesterday, the band also announced that in support of their new release they will be hitting the road this fall on a co-headlining tour with Trivium, who will also be on the road in support of their new release, details on which are to be announced soon. Support on the tour will come from After the Burial and Sylosis. The dates are as follows, and after those you can check out the band’s official lyric video for “Ruthless”.

DevilDriver with Trivium, After the Burial, and Sylosis: 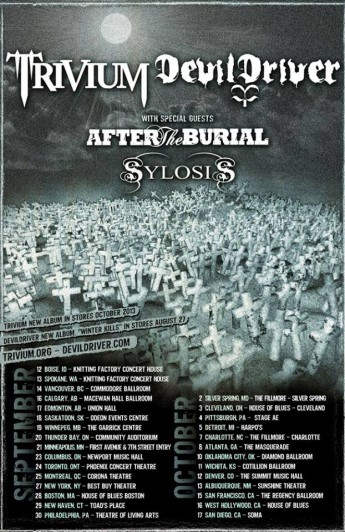 13 Responses to “DEVILDRIVER: “WINTER KILLS” (AND A NEW TOUR)”