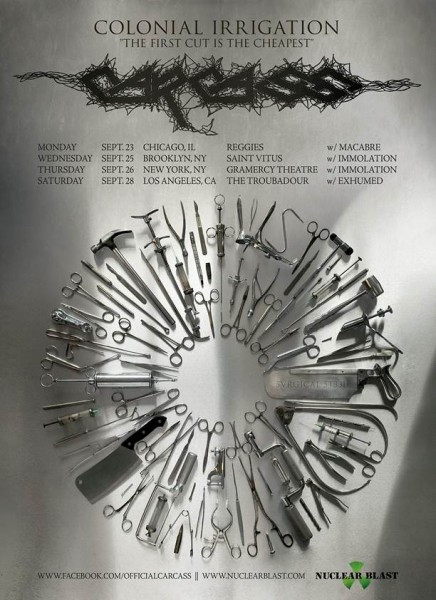 This seems to be a day for tour announcements.  In addition to those we’ve already posted about, Carcass have now announced that they will be playing a select group of “intimate” shows in North America this September in support of their forthcoming album Surgical Steel. I like the tour’s name — Colonial Irrigation — though I wonder if maybe it should have been “Colonic Irrigation”. I also enjoyed bassist/vocalist Jeff Walker’s statement about the tour:

“Well we thought we’d play a few small key shows, kinda like the vibe we had in London earlier this year.  Maybe we’re being a bit optimistic thinking we can fill these venues? Well to make sure we do we’re bringing along some old friends & bands who will probably blow us away. We’re too much of a bunch of tight wads to throw a record release party so this is the closest you’ll get – come on down, and bring your receipt with the new album purchase and demand a refund!”

Those old friends he referred to? Macabre, Immolation, and Exhumed. Not too shabby.

There’s only one problem: Unless you live in the vicinity of Calgary, Chicago, New York, or Los Angeles, you’ll miss out on this deliciousness (that’s right, there is a Calgary date even though it’s not on the tour flyer above — it’s at the Noctis Festival, which has a stunning line-up). Maybe there will be a more widespread tour later on. Here are the tour’s confirmed dates: