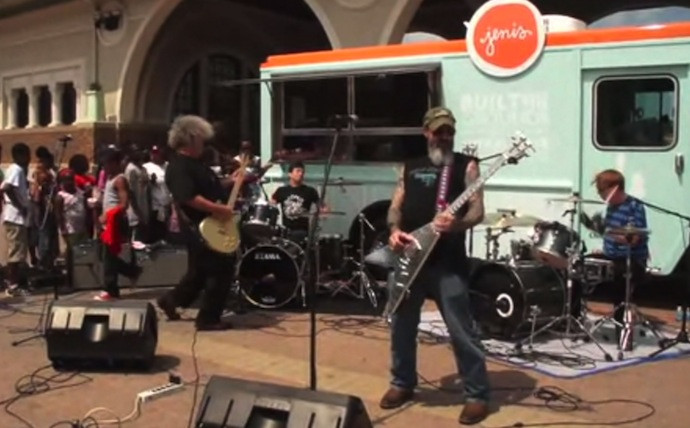 Well, this was just too damn cool not to share.

It’s a new video produced by The Onion’s AV Club of Melvins covering a song by Butthole Surfers in Chicago’s Humboldt Park. Joining in on the song was the Surfers bassist Jeff Pinkus in place of Jared Warren. Behind them is an ice cream truck.

According to the AV Club, the ice cream truck was basically there as a prop. But then Buzz Osborne had the bright idea of yelling “free ice cream!”, and before you know it the band had an enthusiastic audience. The fact that the audience consisted of a bunch of kids didn’t stop the band from playing “Graveyard”, or from causing the song to collapse into a squall of bass-driven feedback while Osborne tossed ice cream into the crowd and Melvins drummers Dale Crover, and Coady Willis beat the shit out of their kits.

“You lie in the graveyard / Well, you’re rotting away / When I talk to you daily / You’ve got nothing to say”. Such wholesome lyrics. Such a heart-warming sight. Watch the video after the jump.