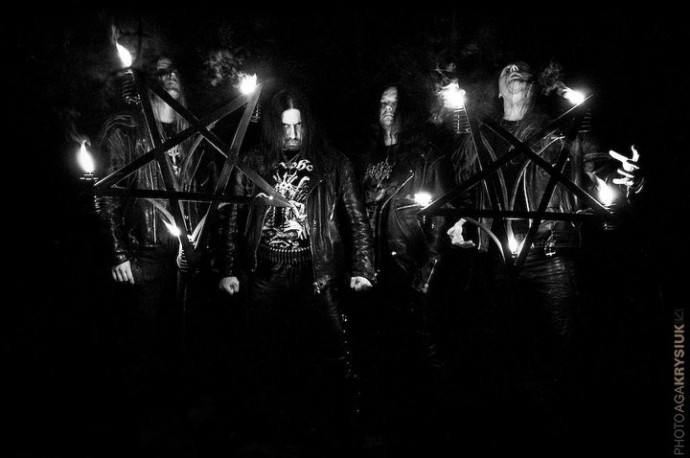 (In this 39th of his reports, Andy reflects upon the discography of Azarath.)

We’ve had a couple of more proggy, melodic acts featured in the last few Synn Reports, so I think it’s about time we got down to something really nasty.

Polish blasphemers Azarath deal exclusively in a brand of raw, bestial, blackened death metal which has its touchstones in the unrelenting assault of Hate Eternal and Dark Funeral and the bone-grinding riff-contortions of Insision and Blood Red Throne, along with occasional flashes of wickedly evil anti-melody a la Necrophobic or Belphegor.

Formed in 1998, the only remaining original member is infamous Behemoth blast-master Inferno, but despite this, the band’s modus operandi – corrupt, brutalise, blaspheme – has never changed. 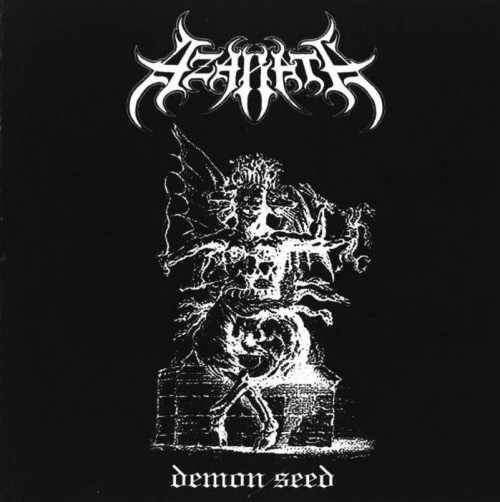 With ten tracks in just over 30 minutes, the first full-length Azarath album wastes absolutely no time enfolding the listener in its morbid embrace.

The neck-snapping chuggery and blasting attack of “Earthly Morgue” immediately kicks the listeners’ teeth down their throats with its overpowering aggression, swamping them with an array of agonised riffs, twisting and turning in technical torment.

The raving black metal punishment of “Doombringer” is up next, its explosive drum patterns and barbed-wire tremolo riffage insinuating themselves insidiously beneath your skin. It’s virulently infectious and violently seditious, and capped off with a chaotic, mind-bending solo.

The titanic brutality of “Heavens Light Demise” is three and a half minutes of pure, primal hate, its whiplash-inducing, stop-start structure and monstrous vocals displaying the visceral intensity and psychopathic technicality of the band in equal measure. Mid-way through, the band unleash an eruption of blinding extremity coated in a layer of sick, morbid melody, showcasing their grasp of evil dynamics and technical ability.

This is followed by the twin-headed abomination of “Taedium Vitae” and “Destroy Yourself”. The former is a haunting piece of ambient horror-scape sounds, while the latter is an unflinching spasm of apocalyptic aural agony, neither of which breaks the two-minute mark.

“Deathlike Silence” sees the drums at their most frenzied and most complex, unleashing a devastating barrage of strafing fills and pummelling blast beats beneath an air-raid assault of napalm vocals and heat-seeking riffage, with an aftermath of cold, chilling melody and dizzying, shell-shocked solo work.

Following the unforgiving sturm und grind of “Traitors” and the necromantic horror-melodies of “Mindloss”, the album concludes with the lethal execution and gut-wrenching drumming force of “Nightskies Burial Ground”. This song has everything – skin-flaying solos, flesh-ripping tremolo riffs, dense, crushing drum-work, and a truly unholy, demonic vocal performance, all arranged in a profane pattern of blistering technicality and irresistible hooks. 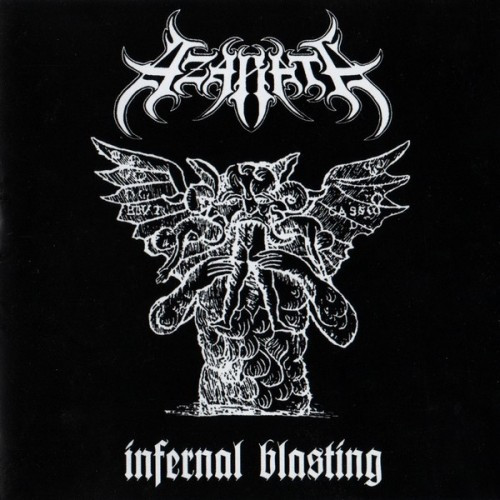 The band’s first album was dangerous. Their second is absolutely annihilating – 29 minutes of relentless sonic warfare.

It kicks off with the monstrous “Legacy of Tyrant Goat”, immediately displaying the thicker, asphyxiating guitar tone and even more devastating drumming that the band have developed since their debut. It’s a truly infernal listen, taking the band’s extremity to new heights.

“Demon Speed” is a razorwind blastbeat inferno with some wickedly infectious riffs buried beneath a pulverising avalanche of heaving drums and guttural, inhuman vocals, while “Christscum” is a terrifying hell-ride through tormented contortions of molten riffage and earth-shaking kick-drum salvos.

The godless depravity of “Damned to Hell” follows, mixing rumbling death metal grind and screeching black metal savagery in one purulent package, before the choking heaviness of “Infested With Sin” introduces a phantom undercurrent of darkly melodic corruption, rising to the surface in feculent swells of serpentine guitar leads and acid-drenched riff runs.

The merciless “Joy of Mutilation” accents its berserker riffs and bulldozing drums with a haunting bleakness, the band’s malevolent black metal side shining through in the song’s judicious application of dissonance and disharmony.

Album finale “Born to Rot” is a more controlled demolition. Its perfectly placed charges of nitrous death metal trigger one after the other, each sequential detonation pushing things faster and faster, building towards unstoppable momentum, ending the album in a tempest of tumult and ruin. 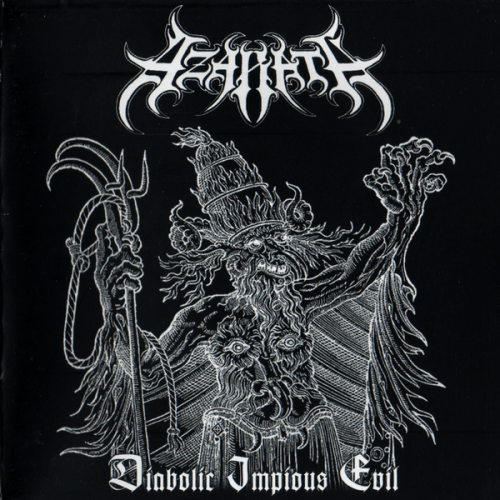 With album No. 3 Azarath hit new heights of blasphemous brutality. The band have never been shy about their shameless Satanic savagery, but this one sees them sinking to a new low of depravity.

It begins with “Whip the Whore”, which builds from a creeping, ominous beginning into a hurricane of jagged riffs and splashy, erupting blast beats. It also shows how far the band’s production has come – not that their previous albums were weak, of course – as everything just hacks and hammers with unbelievable force. The dizzying riffs and rabid vocals build relentlessly towards ignition, culminating in an explosively dissonant solo section.

The bone-saw riffage (enhanced by the album’s wickedly vicious guitar tone) and venom-spitting vocals of “Baptized in Sperm of the Antichrist” are delivered with an unflinching, apoplectic rage and an unmatched ferocity, hammered into killing shape by the lightning fast ripple of the track’s spasming drum rolls and jackhammer blasts.

The militaristic precision with which the band unleash their Satanic fury on “Devil’s Stigmata” is something to behold, a lethal injection of perfectly aligned aggression and heretical hooks which culls its extreme execution from the Belphegor/God Dethroned school of musical misanthropy.

“For Satan, My Blood” is 1 minute 45 seconds of demonically possessed raving and skull-rattling drums, while “Intoxicated By Goat Vomit” is a more refined piece of metallic murder, bristling with flensing hooks and hostile, hypnotic riffs, along with a clanging, tendon-twisting bass presence that gives it a muscular, technical backbone.

The rapturous insanity of “Beast Inside” is a nigh-perfect display of ballistic drum work and ravenous, blood-hungry riffage. The track dwells beneath a looming shadow of vile black metal malice, which does nothing to dull the sharp, gleaming edges of its razor-toothed guitars and scathing blizzards of flesh-ripping tremolo work.

The album climaxes with the choking density and claustrophobic horror of “Goathorned’s Revenge”, part crushing death march, part blackened blitzkrieg, which devastates and decimates yet still leaves the listener breathless and begging for more. 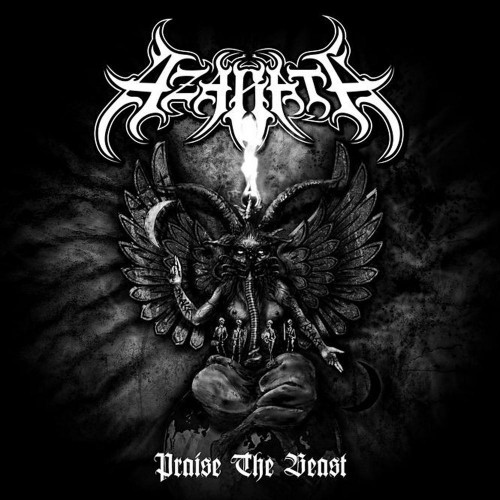 As the band’s longest album so far, “Praise The Beast” sees Azarath take their Satanic sonic rites to the next level, complicating their brutal onslaught with even more intricate twists and turns.

The dizzying dissonance and skull-shattering drumming of “I Hate Your Kind” hammers home the band’s merciless intent, piercing tremolo lines and crippling, antagonistic riffs drilling their way deep into the listener’s brain, periodically dropping into an ugly, blood-soaked groove which only serves to emphasise the remorseless hatred the band have for mankind.

The thrusting, pistoning riffs and scattergun blasts of “Sacrifice of Blood” are truly brutalising, yet the song is still incredibly catchy, melding hypnotic tremolo guitars and violent drum rolls in morbid disharmony, accented by some searing solo work and a punishingly rhythmic, shamelessly Satanic, conclusion.

The manic vocals of “Invocation” switch back and forth between gruesome guttural growls and blazing banshee shrieks, while the guitars mix sledgehammer death metal riffage and asphyxiating black metal dissonance, every scalpel-sharp solo and rending riff delivered with cold, callous precision.

Despite its often devastating speed the incorporation of gruesome, sludge-stained riffage and rumbling, bone-grinding kick drum work in “Queen Of The Sabbath” means much of the song feels like a dragging, suppurating wound, pulsing with gangrenous poison and bile. “Unholy Trinity” has a similar doomy ugliness to it, possessing a malignant darkness at its heart that swallows all light in an impenetrable shroud of necrotic riffs and pulverising drums.

“Obey the Flesh” is a Frankenstein’s monster of self-inflicted wounds and half-healed scar tissue, sewn together from the ravaged remnants of a thousand blackened, putrid corpses. The scything technicality and inhuman intensity of the rolling, blasting, staccato drums and writhing, sinuous riffs is physically stunning, yet equally mesmerising, harsh and hooky without sacrificing an ounce of visceral power.

Nothing this harrowing, this extreme, can last, and by the time the one-two finale of “Throne of Skulls” – a monstrous Satanic hymn of devastation – and “From Beyond The Coldest Star” – a bleakly melodic piece of instrumental desolation – rolls around, the album has begun to tear apart at the seams, unable to contain the limitless violence and demonic lunacy within.

Sample song: “Queen of the Sabbath” 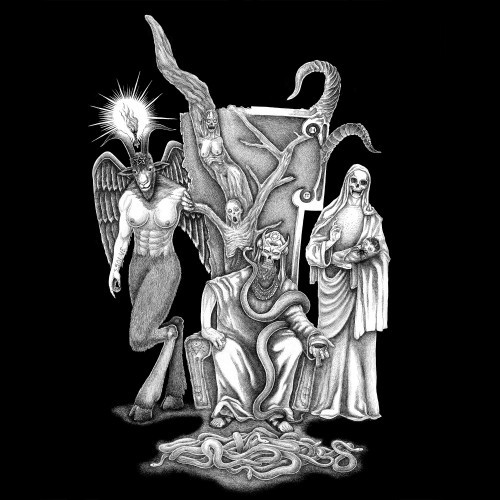 At only two songs long, this EP smashes its way in, sets fire to the building, and speeds off in a cloud of blood-stained dust, leaving only chaos in its wake.

The title track showcases probably the most dense and extreme production the band have received yet, particularly during the brutal barrages of gatling-cannon kick-drums and frenzied blast beats. The track is a near-perfect balance between death metal obliteration and black metal revulsion, utterly vengeful and unforgiving, replete with captivating, corrupting hooks and foul, noxious vocals.

“Rebel Souls” (a cover of fellow Polish death metallers Damnation) has a gruelling Satanic swagger and an undercurrent of decayed melody which manifests during the song’s blistering solo and subtle, chilling embellishments of cold disharmony. 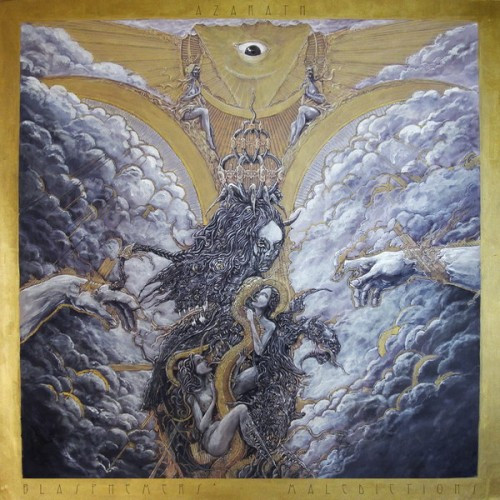 Five albums in and the band show no sign of slowing down or relenting, as Blasphemers’ Maledictions is 45 minutes of profane power and heretical heaviness.

“Supreme Reign of Tiamat” unleashes the sort of psychotic sonic terrorism you would usually associate with Marduk or Immolation, whipping the song into a frenzied firestorm of stuttering, squealing guitars and battering, beating drums. The juddering riffs and manic solo are sickeningly contagious, infiltrating your brain and inducing dangerous levels of headbanging violence.

“Behold the Satan’s Sword” is a fanatical display of diabolical evil, a blackened death metal soundtrack of ceaseless blasting frenzy and demonic, dominating vocals. The absolute highlight though is how the caustic tremolo pattern that pierces through the middle of the song sinuously transitions into a bleeding, serpentine solo (backed by a series of crushing, drumming deathblows), before dropping back into merciless, mechanised pulverisation.

The gleaming, oily vehemence of “Under the Will of the Lord” conjures a choking miasma of pure evil. The song’s pitch-black atmosphere groans beneath the weight of its own malice, erupting in propulsive fury, and concluding with the sort of raving lunacy and chilling, disharmonic tremolo melody that recalls Enthroned at their most unholy.

Blisteringly fast, blindingly technical, and utterly, utterly voracious, “Deathstorms Raid the Earth” is the true soundtrack to the apocalypse, bursting at the seams with feverish riffs, staggering rhythmic shifts, and barbaric vocals, while “Lucifer’s Rising” is the sort of traditional blasphemous blastery that recalls God Dethroned at their most remorseless and unrestrained, with an extra dose of demoniac glory.

The spine-chilling malice of closer “Harvester of Flames” wraps the album in a cancerous corpse-shroud of venomous melody and entombs it in a vault of impenetrable concrete-heavy riffage. It erupts in a scalding torrent of vicious guitars and needle-sharp harmonies, blasting maniacally towards a conclusion of driving chords and hypnotic, doom-drenched malevolence.