We may have another post for you today, a full-album stream of a recently reviewed album, but this depends on the whims of the technology gods. In the meantime, below is what purports to be a list of reasons for admission to an insane asylum in the late 1800s, sent to me by a friend (thank you Patrick). Exactly why he thought this would interest me, I’m not completely sure. But of course it interests me intensely, mainly because the vast majority of these reasons look like metal band names. 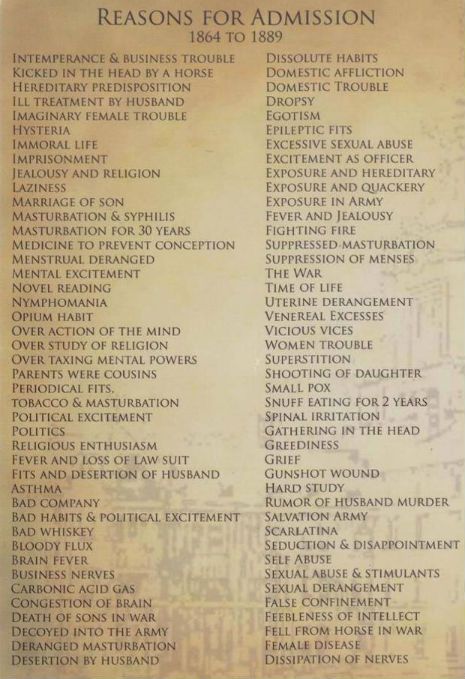 Actually, I’m pretty sure some of these ARE metal band names.

I could have some fun imagining the genres that these fictitious bands play, but I’m supposed to go back to work at my fucking day job, so maybe you’ll feel so inclined in the comments. And regardless of the band-name thing, this is just hilarious — as long as you don’t think too hard about the fact that people were committed to asylums in the late 1800s based on this kind of stuff.

Let’s just all be happy we’re living in the 21st Century instead of the late 1800s, shall we?