(Austin Weber is back for the second day in a row, this time with a review of the new album by Montreal’s Unhuman.)

As any good metalhead knows, the Canadian metal scene is insane. So many amazing, influential bands have come from here, though overall it’s always been their death metal scene I’ve been drawn to the most. A big part of what makes their scene so strong is that many of the best performers have shared their talents among multiple groups/studio projects/playing live for each other.

Unhuman falls in that category, as a group collectively steeped in years of death metal mayhem that starts with founding member and composer of almost all of the music on Unhuman’s Unhuman — Youri Raymond. It’s a name some will have heard before as a member/songwriting contributor for some of the tracks on last year’s amazing Cryptopsy album. Still others may know him due to his involvement with Secret Chiefs 3, as he contributed vocals on several tracks on Book Of Horizons, which is what led me to Unhuman a long time ago. He added current drummer Alexandre Dupras (The Plasma Rifle, Teramobil) in 1999 and then added current bassist Mathieu Bérubé (Teramobil again, whose latest release I previously reviewed hereat NCS) in 2008, and rounded out their line-up with guitarist Kevin Chartré (Beyond Creation, Brought By Pain) in 2011. 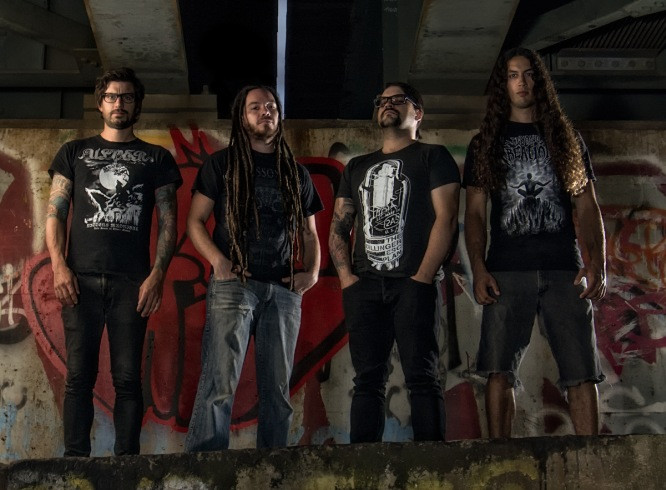 Most of these tracks are old Unhuman songs, with seven of them stretching back to 1999 and 2001. The wide span of time between some of these songs certainly lends a complex flavor to the overall sound, as there is a lot of diversity in what they do from track to track. Their music comes across like an expansive mix of Gorguts meets Anata, with a strong Cryptopsy element and a noticeable Death influence, combined and configured in interesting ways that are both horrifying and spellbinding.

This is very compact, technical music, with songs that are hard to discuss individually. All of them are entangled, churning storms of both melodic and aggressive ideas fighting each other and frequently combining and splitting—in unorthodox fashion. That being said, there is a wide degree of different focus among the songs. About half the album’s tracks dwell more in the realm of lethal ferocity, with tracks like “Mutant Wars”, “Doucees Pensées”, “État d’Contrôle”, and “Psychotic Afterlife” embodying that mind-set in wonderfully varied ways.

Other tracks travel in a more contemplative, groovy, and cerebral direction, at least part of the time. This is evident on tracks like “Chaotic Equilibrium”, “Once Again”, instrumental “(in)Human Being”, and “Individual Timeless Reality”. You’ll also hear a brief acoustic intro to “Sécheresse” that works well, in addition to a sublime acoustic outro layered with howling winds that closes “Individual Timeless Reality”. The punk-fueled influence on “État d’Contrôle” is another touch I love and didn’t expect either.

I was lucky enough to get an advance copy from the band, but even having spent weeks listening to the album (first a pre-mix, then a finished version), I still find myself overwhelmed by it. So much happens in every song, it’s kind of astounding. 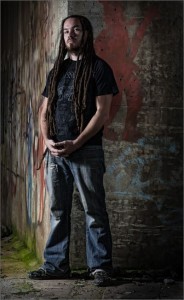 The wide-ranging and ruthless vocals of guitarist Youri Raymond deserve special mention. Beyond his gnarly, gnashing screams and varied growls, he also employs sickening squeals/gurgles and sometimes hits an odd wheeze-meets-a-cackle and a yelping style that is beautifully demented. He is the only guitarist/vocalist I can think of who performs vocal parts that extend for such sustained durations—specifically his deep squeals and gurgles, but sometimes his screams as well, as you’ll hear part-way through “Psychotic Afterlife”. Youri’s lyrics are another highlight of the album; they’re stuffed with philosophical thoughts and reflective musings on reality and humanity.

Special praise also goes to Chris Donaldson from Cryptopsy, who did a phenomenal job recording, mixing, and mastering the album, along with some additional recordings done with Mathieu Marcotte of Augury. This album sounds very fluid and life-like, the guitar sound both precise and yet with hefty weight to their tone. The hard-hitting seven-string bass playing of Stéphane Dorval gets plenty of room in the mix as well, much to my delight as a bass freak. (While Mathieu Bérubé is their current bass player, I found out today he is only on “(in)Human Being” since all the other bass tracks were recorded long ago by Stef Dorval.) Additionally Alexandre Dupras is a (small pun intended) unhuman force behind the kit; his drum playing sounds killer and perfectly situated in the mix.

You’ll find many bands who are very skilled death metal musicians crafting intricate music, and yet many of them fail to find a real identity of their own. Unhuman break from the pack, and have given us a series of exquisitely crafted tracks set in their own universe. No one sounds quite like Unhuman, nor do they sound like any other band or style of death metal. Without a doubt, Unhuman’s Unhuman is one of the finest albums of the year, a true sleeper hit you don’t want to miss. It is by and large unfuckwithable. Most death metal is simply blasé when compared to the creative, mind-inverting compositions contained within this album.

Unhuman is out now and an album you need to buy. Listen below.